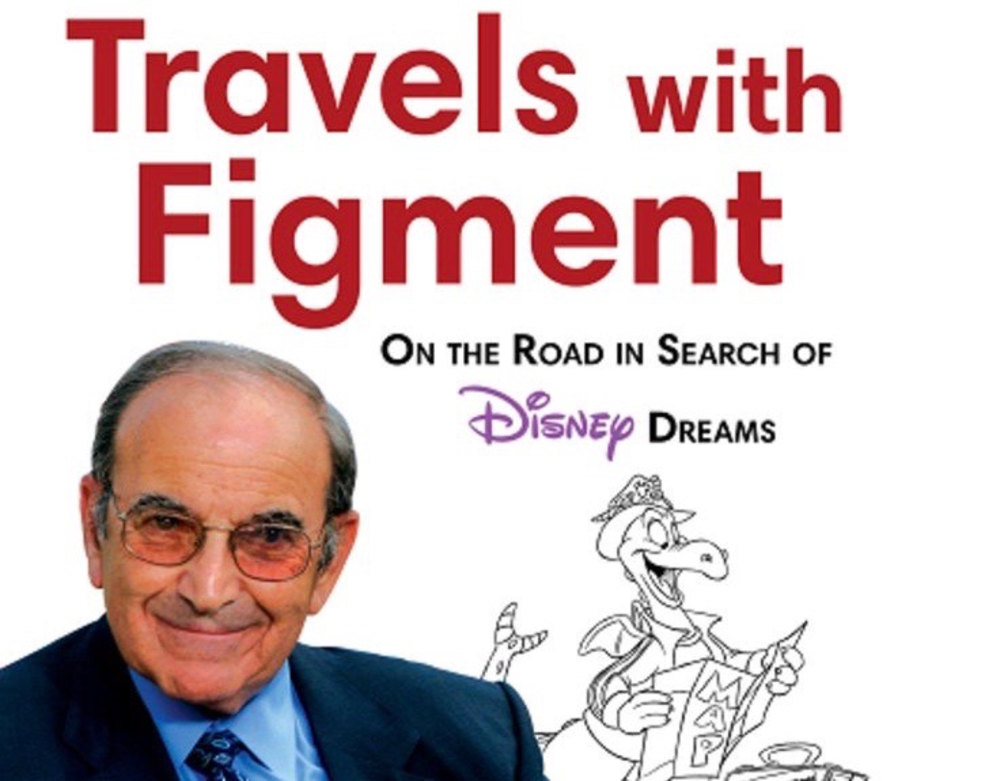 “Everything about Marty was legendary – his achievements, his spirit, his career. He embodied the very best of Disney, from his bold originality to his joyful optimism and relentless drive for excellence. He was also a powerful connection to Walt himself. No one was more passionate about Disney than Marty and we’ll miss his enthusiasm, his grace, and his indomitable spirit.” – Bob Iger

This is one of many tributes that was paid to Marty Sklar, former vice chairman and principal creative executive of Walt Disney Imagineering who passed away on July 27, 2017 at the age of 83. At the time of his death, he was close to completing his third book, “Travels with Figment: On the Road in Search of Disney Dreams.”

“There was never any doubt that my mom and I would finish this book,” said Leslie Sklar, Marty’s daughter. “We really didn’t know how it was going to happen, but we knew that it would. It was hard to get back to it. My dad had worked very hard to get to where he was in the book, so I didn’t want to let him down by not getting it published.”

After retiring from The Walt Disney Company, Sklar filled his time as Walt Disney Imagineering’s international ambassador and writing about his 53 years of service with the company. In his previous two books, “Dream It! Do it!: My Half Century Creating Disney’s Magic Kingdoms” and “One Little Spark: Mickey’s Ten Commandments and the Road to Imagineering,” Sklar told amazing stories about working with Walt and his brother Roy, behind the scenes stories about how each of the Disney theme parks around the world was created, working with the original group of Imagineers, talented artists, as well as the current group of talented Imagineers. “Travels with Figment: On the Road in Search of Disney Dreams,” which will be released this November, is no different.

In the nine chapters that comprise this book, Sklar continues to tell stories and some even his wife, Leah, and daughter, Leslie, said they had never heard before.

In “Travels With Walt,” Sklar talks about additional trips he took with Walt and other Disney executives and Imagineers including Ham Luske, Claude Coats, Xavier “X” Atencio, and Walt’s wife, Lillian. The chapter mainly focuses on flying aboard Walt’s Gulfstream One. “Walt was enamored of that Gulfstream, and of a smaller Beachcraft King Air…” According to Sklar, the Gulfstream “set a world record … logging more than 8,000 flights, nearly twenty thousand flight hours, and approximately 5 million miles by the time it retired in 1992.”

In Chapter Two, “Tricks and Treats – Ten Tales of Travel,” Sklar describes 10 of his favorite travel-related stories including meeting Bo Derek and General Omar Bradley. Inspired by John Hench’s pin-covered hat, Sklar started his own (only after he got Hench’s blessing after he lost his). Out of the 80 pins covering his hat, Sklar describes nine of his favorites and why they meant so much to him.

In “The New York World’s Fair” From ‘Menopause Manor’ To Flushing Meadows,” Sklar describes their interaction with many corporate executives including those from the Ford Motor Company and the creation of their 1964 World’s Fair exhibit, Magic Skyway, and General Electric’s Carousel of Progress attraction. Sklar said, “I’m quite sure that I spent more time working with General Electric as a participating sponsor in our Disney parks than with any other client.” He also talks about the Horizons attraction at EPCOT Center and Bob McCall’s mural, The Prologue and the Promise. When Horizons closed, the mural was to be removed, rolled up, and shipped back to Imagineering in California. The mural was removed, but never arrived. Sklar looked for it a number of times, but never found it. To this day it is still missing.

In “I May Never Be Found Alive,” Sklar recalls a hilarious story about Jack Lindquist, President of Disneyland, and his first time on the swampy wilderness in 1968 that was Walt Disney World. This chapter covers various stories about his adventures at Walt Disney World in Orlando, Florida. Sklar tells about their meetings with the Florida Citrus Commission and the creation of the previous retired and now fan-favorite, Orange Bird, as well as construction of the Contemporary Resort Hotel and the Walt Disney World Preview Center.

Sklar continues discussing meeting and working with various corporate executives in “That’s Vladimir Zworykin – He Invented Television!” He passed Zworykin in the halls at RCA and asked their host who that “little old man” was and was informed that he was the man that invented television. Other gems in this chapter include Sklar and other Disney executives in a pitch meeting with Robert Sarnoff, chairman of RCA, about them sponsoring a new attraction, Space Mountain, only to find out that Sarnoff had no idea who they were. Sklar also describes the great lengths they had to go through to make presentations to companies such as GM (EPCOT Center’s World of Motion pavilion), Kraft, Exxon, and United Technologies.

Probably one of the best stories in “Travels with Figment: On the Road in Search of Disney Dreams,” comes in Chapter Six. This chapter reveals amazing stories about some legendary people including Phil Hettema, Rick Rothschild, Pat MacKay, Roberta Perry, Nancy Seruto, and Ray Bradbury. Bradbury, who was a friend of Walt Disney and a big fan of the Disney parks, developed the storyline and script for EPCOT Center’s Spaceship Earth attraction. “Of course, we wanted Ray, who was so instrumental in framing the central theme of the project, to attend,” said Sklar. “There was just one problem: the renowned futurist, whose works had taken us on flights of fantasy to Mars, did not drive and would not fly!” Thanks to John Hench, Bradbury was there on opening day.

In “Mouse Meets, Monorails and all the Disney Ships at Sea,” Sklar talks about some of the unusual ways some of the Imagineers found their way to WDI including Steve “Mouse” Silverstein, Alfredo Ayala Jr., Kevin Rafferty, and Dexter B. Tanksley. Serving as WDI’s ambassador, Sklar had the opportunity to meet a diverse group of people at a wide variety of venues. He concludes this chapter by highlighting venues that were his favorite or that made a big impression on him.

Chapter Eight, “Everything I Need to Know I Learned From Mickey’s Ten Commandments,” was mostly written after Sklar’s death. “Before Marty passed away, he asked for contributions for this book,” writes his family. “Some of the contributions were submitted before Marty’s death. Others came in later when we let everyone know we were working to complete this book.” Sklar’s request asked leaders in the TEA Industry (Themed Entertainment Association) how “Mickey’s Ten Commandments,” which Sklar wrote, had an impact on their career and if they were of any value or use or had no impact whatsoever. Many professionals sent his family their thoughts, including Dan Adler, Former Vice President, Creating Development, Walt Disney Imagineering; Tony Baxter, Former Senior Vice President of Creative Development, Walt Disney Imagineering; George A. Kalogridis, President, Walt Disney World Resort, and many more.

The “official” final chapter, “Travelling and Spreading ‘The Word’ – The Best Advice I Ever Heard” is Sklar’s version of offering sage advice through words of inspiration. From Imagineers to co-workers, aspiring Disney cast members to Disney fans, what Sklar said is taken to heart. But not all of it was from the man himself. “As I have travelled and spoken to audiences around the country (and at sea),” said Sklar. “I have shared the best of the advice I heard from the many amazing people I’ve had the good fortune to meet and work with while creating the Disney parks and resorts.”

The last chapter talks about Sklar’s legacy and the many accolades and tributes that poured in. “After Marty’s passing, messages of appreciation, both public and private, reinforced one important truth: the Marty his family knew was the same Marty his colleagues and fans knew,” wrote his family. Naturally the chapter concludes with the lyrics from one of Sklar’s favorite – and many Disney fans as well – songs from Epcot’s Journey Into Imagination with Figment attraction – “One Little Spark.”

As with all of Sklar’s books, “Travels with Figment” gives the reader the feeling that Marty is sitting across from you and regaling you with amazing stories that fulfills every Disney fans dream! It’s a fitting tribute to a beloved and dearly missed man.