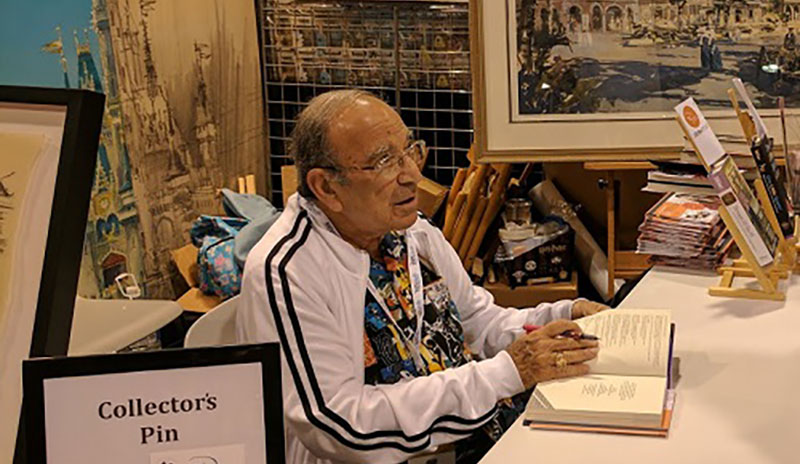 Marty Sklar’s imagination has influenced millions of people. I feel justified in making this bold claim because he has been a driving force in Disney parks worldwide. When Marty officially retired in 2009, Richard Sherman sang the following song that he penned for the retirement party:

(to the tune of “Supercalifragilisticexpialidcious”)

Before the doors of Disneyland

Were opened to the world

To have his writing skills unfurled

Was first product of his skill

Then PR and Publicity

By now, you have all heard the sad news that Marty Sklar passed away on July 27, 2017. You’ve all read the story about how he got his start with the Walt Disney Company and worked closely with Walt himself. What you may not know is just how many iconic Disney attractions he designed, influenced and worked on.

It can be difficult to pinpoint just what exactly Marty worked on because he would much rather talk about the achievements of his mentors and his colleagues. I really think that may have been one of his greatest strengths, finding the best person for the job and motivating them to reach their highest creative peaks.

But we do know that he wrote a lot of the dialogue for the Tiki Room. So next time you listen to the birdies sing and you chuckle (or groan) at the puns, spare a thought for Marty Sklar. We also know that Marty Sklar helped to create all of the 1964 New York World’s Fair attractions: “it’s a small world”, Magic Skyway, Carousel of Progress and Great Moments with Mr. Lincoln. He was involved with all of the writing for the World’s Fair, including the Ford exhibition. Marty spent three weeks with the Ford Motor Company to understand what they wanted to communicate. In the end, he felt the message they wanted to convey was that the Ford Motor Company was international and innovative. It was Marty’s job to pass this message on in a 3-D format.

Out of this came Ford’s Magic Skyway, where people would ride in Ford cars through recreations of our Natural Parks. Unfortunately, Chevrolet’s slogan at the time was “See the USA in your Chevrolet”, so they had to alter the idea a bit. 70 Ford convertibles would take guests through several life size dioramas. They would journey through the time of dinosaurs (later moved to the Disneyland Railroad), onward through scenes of cavemen making steady technological progress that culminated in the wheel, before finally arriving in a futuristic city. Marty thought it was great that after the World’s Fair, Ford put engines into the convertibles and sold them as World’s Fair vehicles. Many of these concepts would find their way into Epcot rides like Spaceship Earth and World of Motion.

Marty also came up with the famous “small world” tag line for The World’s Fair: “the happiest cruise that ever sailed around the world.” Much later in the future, Marty, along with Tony Baxter and Kim Irvine, would lead updates to Disneyland’s “it’s a small world”. Disney Animation characters were seamlessly added into each scene. To this day this attraction is Marty’s favorite because of the message behind it. “There is just one moon and one golden sun” is his favorite lyric. Marty also wrote the text for the legendary ‘Coming Soon’ sign for the Haunted Mansion in Disneyland.

“Notice! All ghosts and restless spirits. Post-lifetime leases are now available in this Haunted Mansion. Don’t be left out in the sunshine! Enjoy active retirement in this country club atmosphere, the fashionable address for famous ghosts trying to make a name for themselves…and ghosts afraid to live by themselves! Leases include license to scare the daylights out of guests visiting the Portrait Gallery, Museum of the Supernatural, graveyard and other happy haunting grounds. For reservations send resume of past experience to: Ghost Relations Dept. Disneyland. Please! Do not apply in person.”

Perhaps Marty’s most ambitious work, he led the creation of Epcot from 1974 to 1982. Sklar helped Walt to produce the 1966 short film that was played for investors to pique their interest in Epcot.

I was able to attend this year’s D23 Expo and I was lucky enough to hear Marty Sklar speak at The Legends of Walt Disney Imagineering panel. One topic that was discussed at the panel was something that might not immediately spring to mind when one thinks of the parks, yet is crucial to the theme park experience: the music. There were only five original songs created for the Disney theme parks until Epcot came into being. “Tiki Room”, “it’s a small world” and “Great Big Beautiful Tomorrow” were all penned by the inimitable Sherman brothers. The Pirates of the Caribbean song, “Yo Ho Yo Ho“ and “Grim Grinning Ghosts” from Haunted Mansion are the other two songs, written by X Attencio. However, “Grim Grinning Ghosts” was written in 1969. Marty realized that it had been thirteen years since any new songs had been created for the Disney parks.

Marty told a great story at the panel about the man who wrote a lot of the music for Epcot. He was discovered at a bar near the Disneyland park, Bob Moline. Can you imagine that? One night you’re singing in a bar, the next you’re writing songs for Walt Disney World.

Moline had a hand in writing “Listen to the Land”, “Canada You’re a Lifetime Journey”, “Energy- You Make the World Go Round” and “Golden Dreams”.

Marty also called back the Sherman brothers to create the iconic “One Little Spark” for the Figment attraction, “Magic Journeys” and “Makin’ Memories” for Kodak. According to Marty, “One Little Spark” is the theme song for Disney Imagineering. One of Marty’s favorite pavilions is The Land. He really liked the idea that the pavilion grew food that people inside the parks then ate. Marty told a great story about walking through a mock up of the attraction with researchers from the University of Arizona environmental research lab. At the end of the tour Dr. Carl Hodges said, “this is all great, but where will we put the bees?” And Marty says…”Carl, these are open boats, we can’t have bees. We’re storytellers and entertainers, we come to you to figure out these things.” So today, about once a week they hand pollinate all the plants in the attraction. When asked which attractions that never came to be he’d most like to see,  Marty named two World Showcase pavilions: Switzerland and Iran. They had made a presentation to the Shah of Iran and he loved the idea, but two weeks later the Shah was overthrown. So that was the end of that.

When he speaks of his proudest moments from the entire Epcot project they are all about the accomplishments of others. He was very proud of Monty Lunde, who created special effects for Epcot and later went on to become one of the co-owners of the industry’s premier company that creates attractions, exhibits and state-of-the-art special effects. Glen Birket helped to create the technical system for the American Adventure. Mark Fuller worked on the fountains of Epcot and he went on to found WET Enterprises and to create the Fountains at the Bellagio and many other notable fountains.

For Walt he wrote his speeches

And his annual reports

Then moved to WED to help create

From Small World to Space Mountain

With their creative sparks…(and his)

Marty didn’t like everything that he worked on for the parks. He was very much against California Adventure in its original form because he believed that it moved away from large-scale world creation and focused on less immersive rides.

Probably one of the last public comments on the parks made by Marty was at this year’s D23 Expo in mid July. He was a panelist at the Pirates of the Caribbean anniversary discussion. Of course, the new changes to the auction scene came up and Marty had this to say: he went back to the Disney archives and noticed how negative the reviews were about the opening of Disneyland. Sklar said Walt was not phased by any of it and said “let’s do it (start fixing things)”. He went on to say that being around Disneyland for 60 years, every attraction had some kind of change. It’s like a theater show, you come up with a new act and it’s great. It’s still the same story but you’ve brought a broader dynamic into it. Marty appreciates and understand that we all came to Disneyland when we were young and we now bring our kids, and we want things to be the same and how we saw it back then. But he doesn’t think that we’d want our kids to see it how it was that first year. Walt was always fixing things and making things better. It’s part of the tradition at Disneyland.

He’s first to give out credit

To the great creative teams

His one persisting goal

Was to perpetuate Walt’s dreams

Succeed he did, and so we stand

As one to give three cheers

To Marty Sklar, the champion

While at D23, I was privileged enough to meet Marty Sklar at a book signing. He has such a great persona in person. He is quiet, yet he commands the room. I loved how he signed my book and wanted to share it with you all: So next time you’re in a Disney park, take a moment to stop and thank the great Marty Sklar for all that he’s done to create the joy and imagination that infuses every Disney park.

Second star to the right and straight on til morning, Marty.