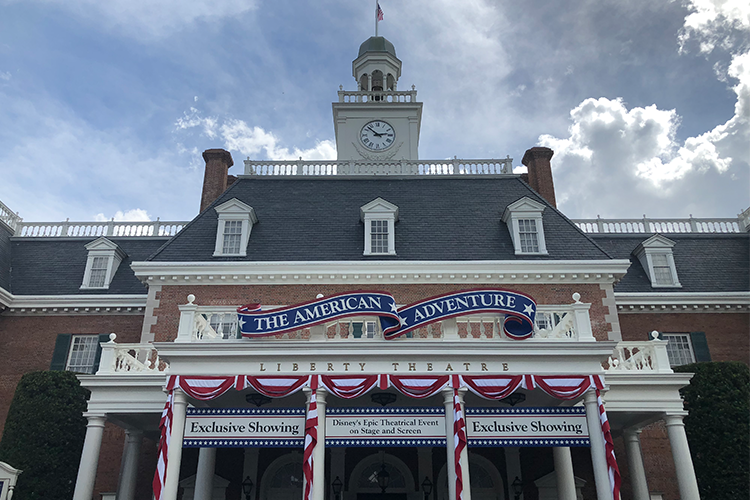 The American Adventure pavilion is a colonial-style mansion whose roots are found in the architecture of Independence Hall, Boston's Old State House, Monticello, and Colonial Williamsburg. The 110,000 bricks used on the building are all hand-made from Georgia clay and were tinted and aged to add authenticity. The interior floors are made from marble and copper.

The lobby and halls are lined with quotations from notable Americans such as Walt Disney, Althea Gibson, Charles A. Lindbergh, Ayn Rand, Thomas Wolfe, Wendell Wilkie, and Jane Addams. The artwork depicts the development of the United States.

Across the World Showcase promenade on the lagoon is the outdoor stage and amphitheater known as the America Gardens Theatre. Live shows such as the Candlelight Processional, Garden Rocks concert series, and Eat to the Beat concerts are held here.

The American Adventure Pavilion is all about patriotism, with the gardens planted in hues of red, white, and blue. The roses are all varieties that are named for U.S. Presidents.

The 8-part a cappella singing group, Voices of Liberty, performs American folk songs in the rotunda of The American Adventure. (Performances are Wednesday through Sunday.) They can also be found on the outdoor stage at America Gardens Theatre Mondays and Tuesdays, singing arrangements of popular American songs. If you're in the area and have a few minutes, this group is definitely worth checking out. A 5-part a cappella group, American Music Machine, performs on the America Gardens Theatre stage Wednesdays through Sundays in the afternoons. They sing contemporary American hits. 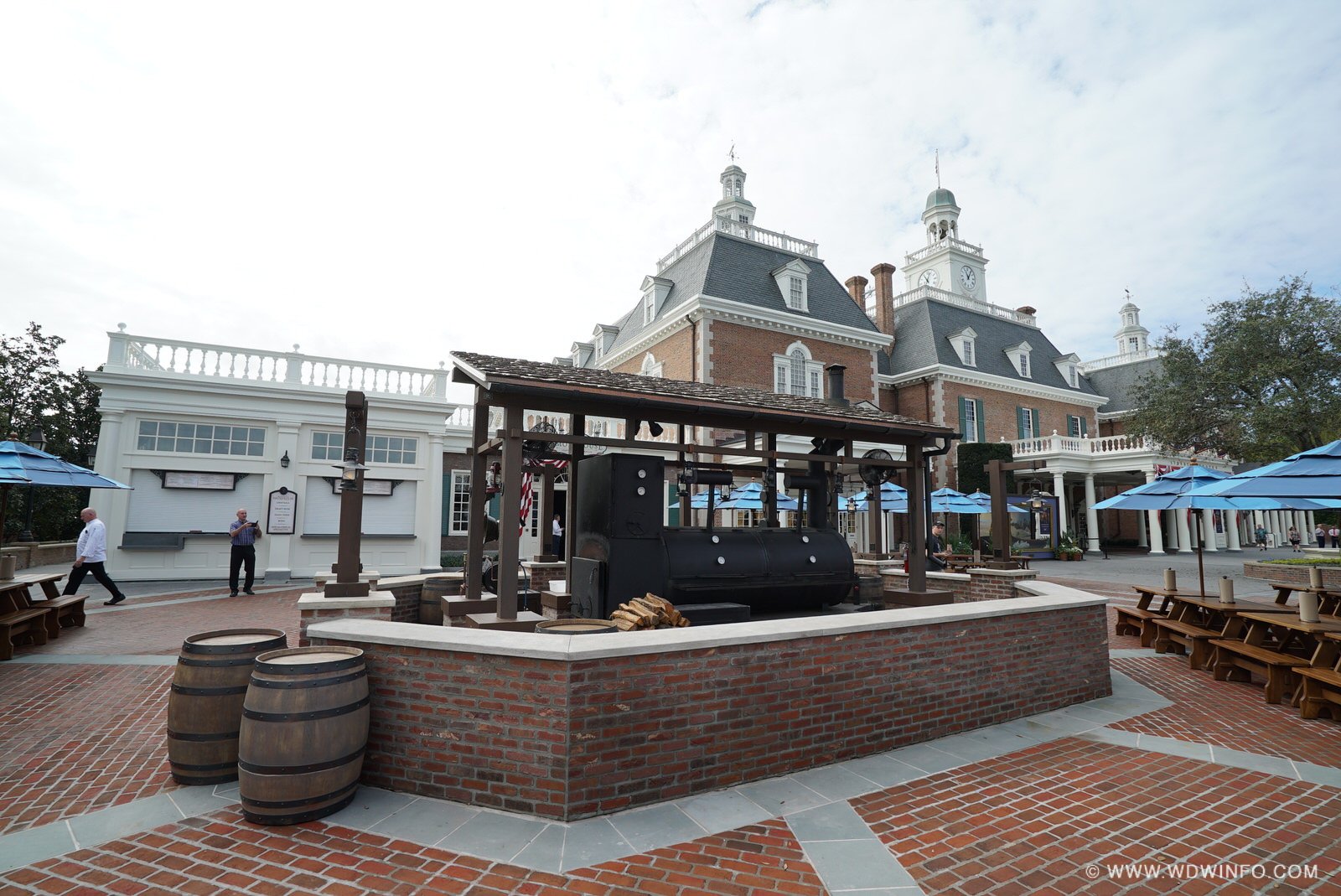 While there is no table service restaurant here, the Regal Eagle Smokehouse has a great menu and their food can't be beat! This quick service location serves up good ol' American barbeque smoked by the pitmaster.

There is also the Fife & Drum which serves Turkey Legs, hot dogs, and smoothies.

The Funnel Cake Stand is a free-standing booth to the right of the American Adventure pavilion offering funnel cakes with toppings. 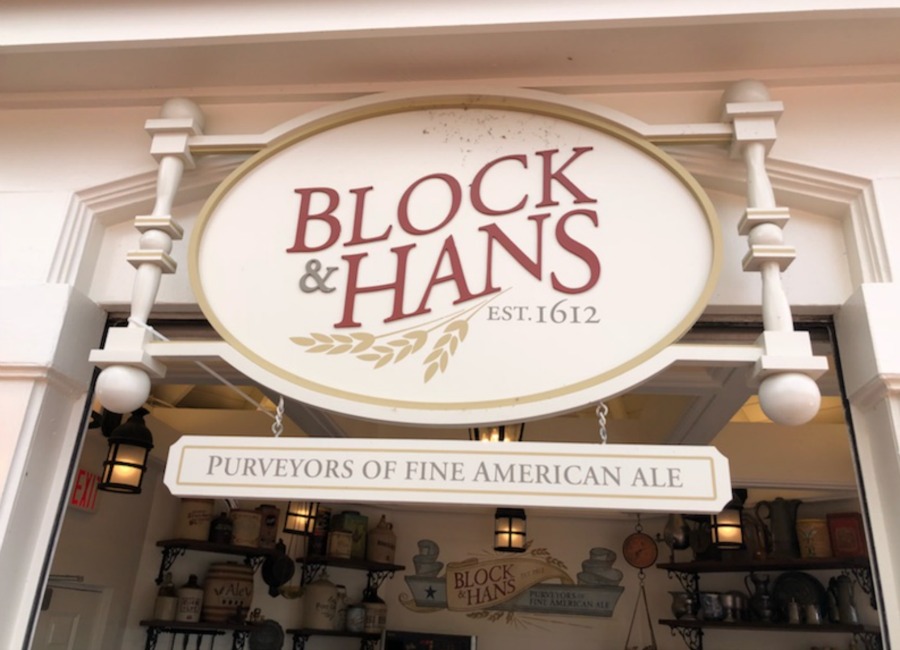 Before entering the American Adventure theatre, you will see a collection of the flags which have represented the United States during the course of its history. The show is a patriotic look at the concepts America was founded on. Hosted by Benjamin Franklin and Mark Twain, the 29-minute show blends Audio-animatronics with images shown on a 72' rear projection screen.

There are 6 statues on each side of the theatre which represent Individualism, Innovation, Tomorrow, Independence, Compassion, Discovery, Freedom, Heritage, Pioneering, Knowledge, Self-Reliance, and Adventure. 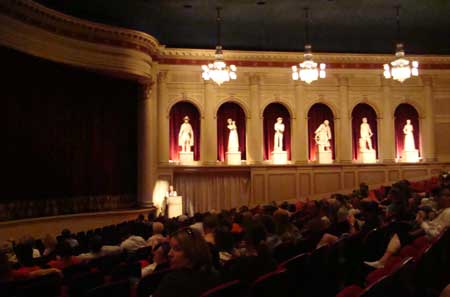 There are 35 Audio-animatronic figures used in scenes depicting the Pilgrims' arrival at Plymouth Rock, the Boston Tea Party, George Washington at Valley Forge, the writing of the Declaration of Independence, the Civil War, slavery, and the invention of the telephone.

Disney's attention to detail is evident in the speeches and broadcasts used. They are often the original text and, where available, the actual recordings.

For hearing impaired guests, assistive listening devices are available at Guest Services. Deaf guests may use the reflective captioning stands, ask a Cast Member at the entrance for assistance. The theatre is wheelchair accessible. All areas of the American Adventure are wheelchair accessible.

The Soul of Jazz: An American Adventure 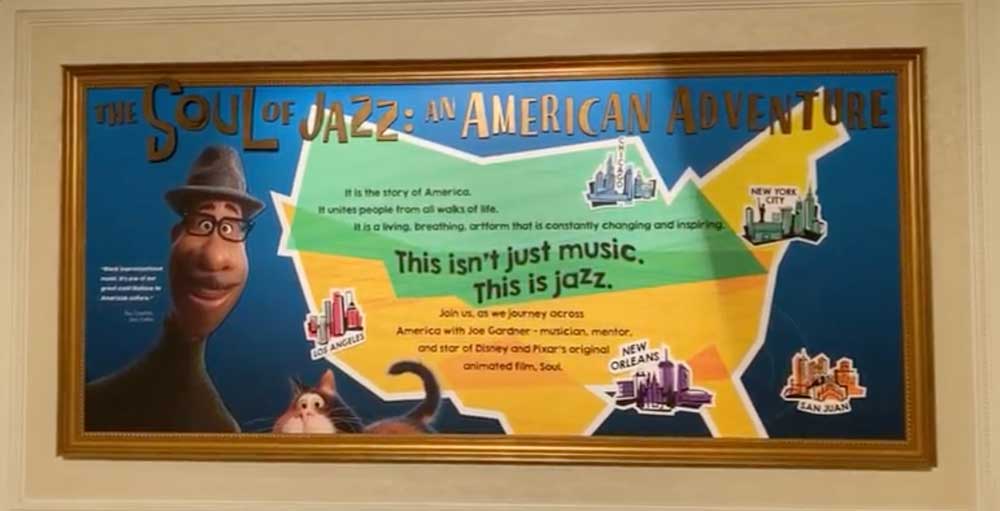 “The Soul of Jazz: An American Adventure,” is also located in this space and celebrates the distinctly American musical art form of jazz.

Joe Gardner – the musician, mentor and teacher from Disney Pixar's Soul shares the history of jazz as he takes viewers on a musical tour of several influential American cities throughout the film. Those cities are highlighted in this new exhibit along with artifacts from legendary jazz musicians, including Louis Armstrong. 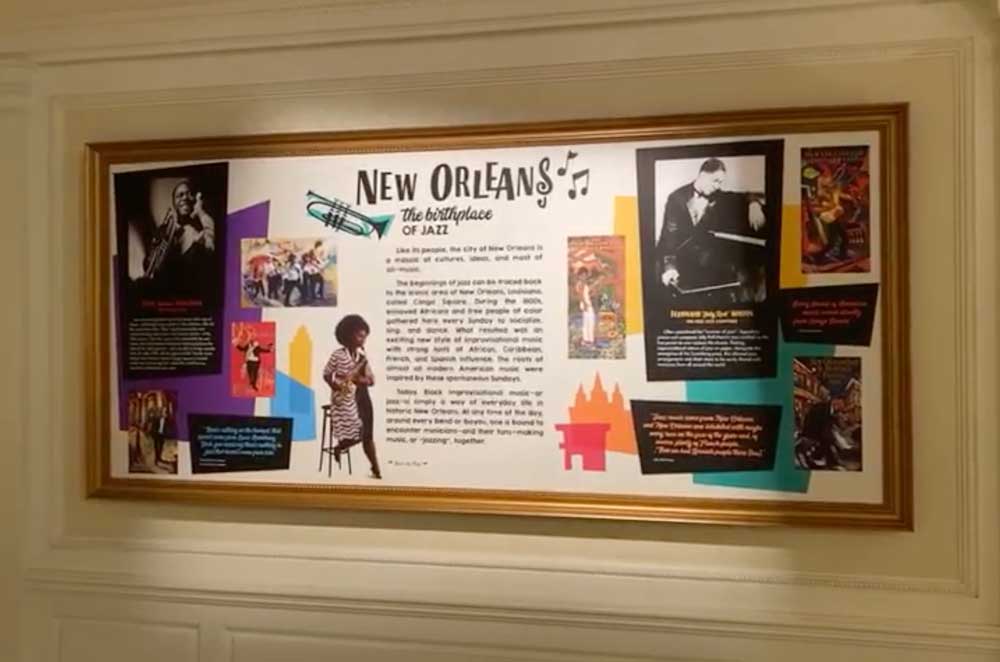 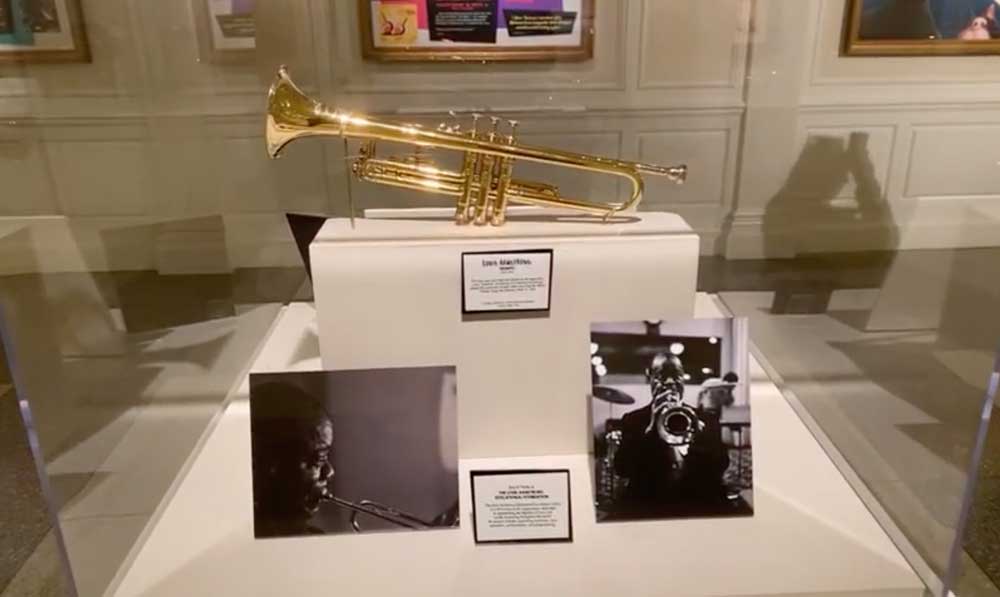 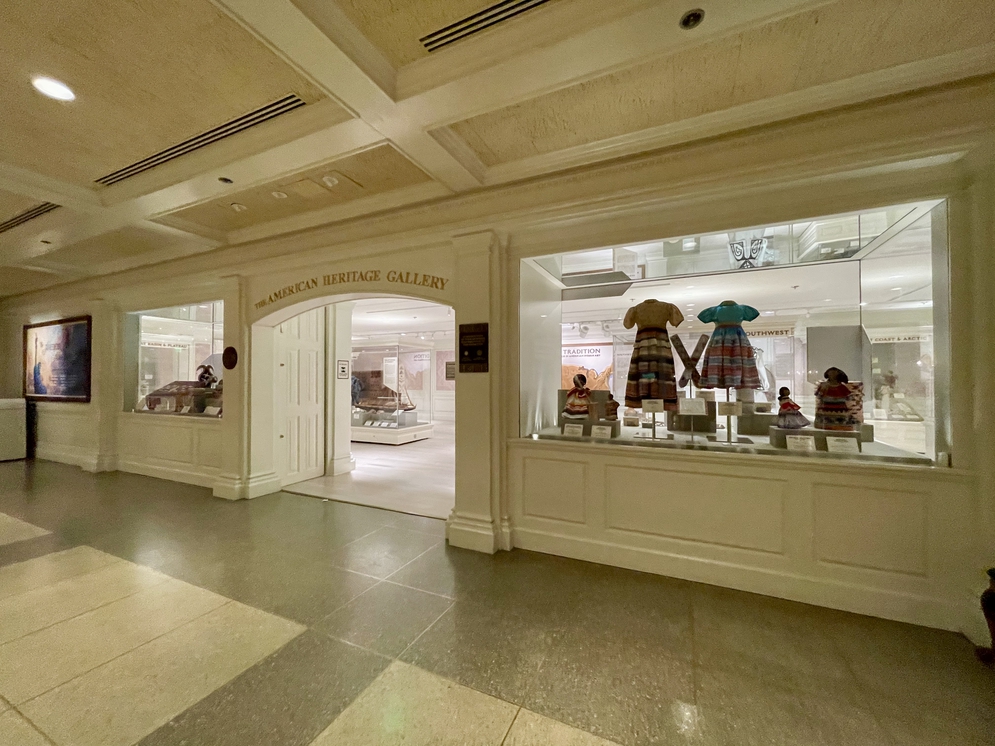 American Indian history and culture come to life in a new art exhibition at the American Heritage Gallery at Epcot. “Creating Tradition: Innovation and Change in American Indian Art” inside The American Adventure pavilion displays the work of contemporary Native artists alongside artifacts from centuries past, demonstrating how ancestral craftsmanship influences modern generations.

There are currently 89 pieces on display which represent 40 different American Indian tribes from seven geographic regions across the United States. 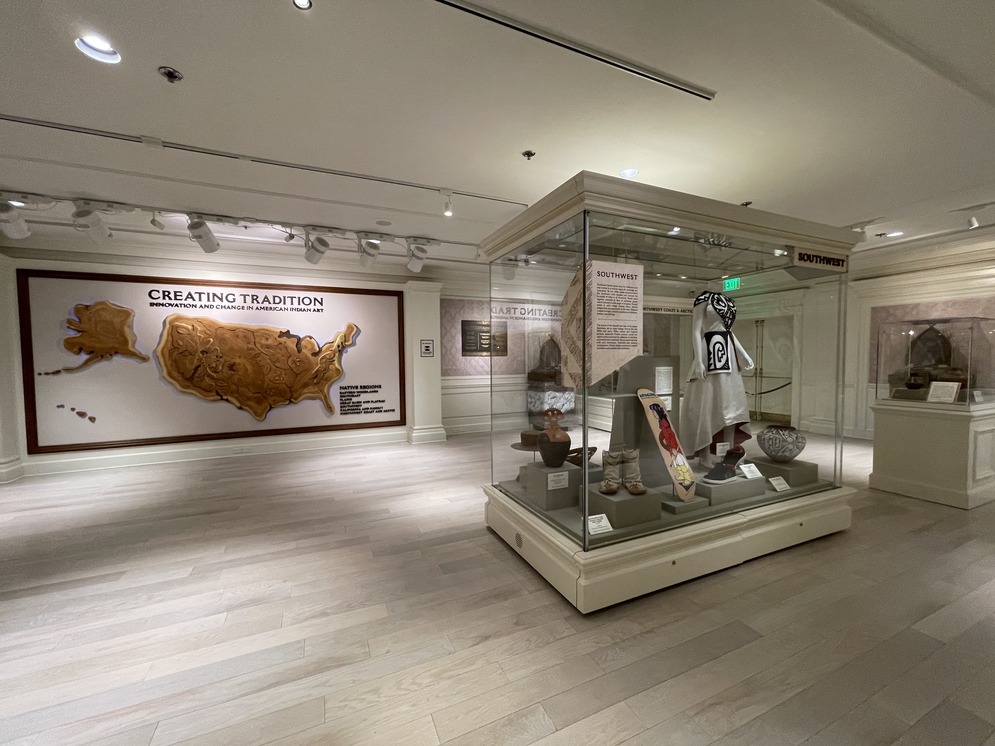 Highlights from the collection include:

Fashion designer Loren Aragon (Acoma Pueblo) used the patterns on a jar made in the 1900s by an Acoma Pueblo potter as inspiration for his “Ancient Resonance” dress.

A Pokagon Potawatomi black ash hamper basket, made in the early 1900s, is paired with modern baskets, exemplifying how this technique is maintained over centuries. For example, on display is “Mother’s Womb,” a basket made by Cherish Nebeshanze Parrish (Potawatomi/Odawa) in 2011.

A Chilkat blanket from Alaska dating to the 1890s complements “Raven and the Box of Daylight,” a 2017 glass sculpture by Preston Singletary (Tlingit). This piece shows how Singletary experiments with designs from his Tlingit heritage in mediums beyond traditional Native materials. 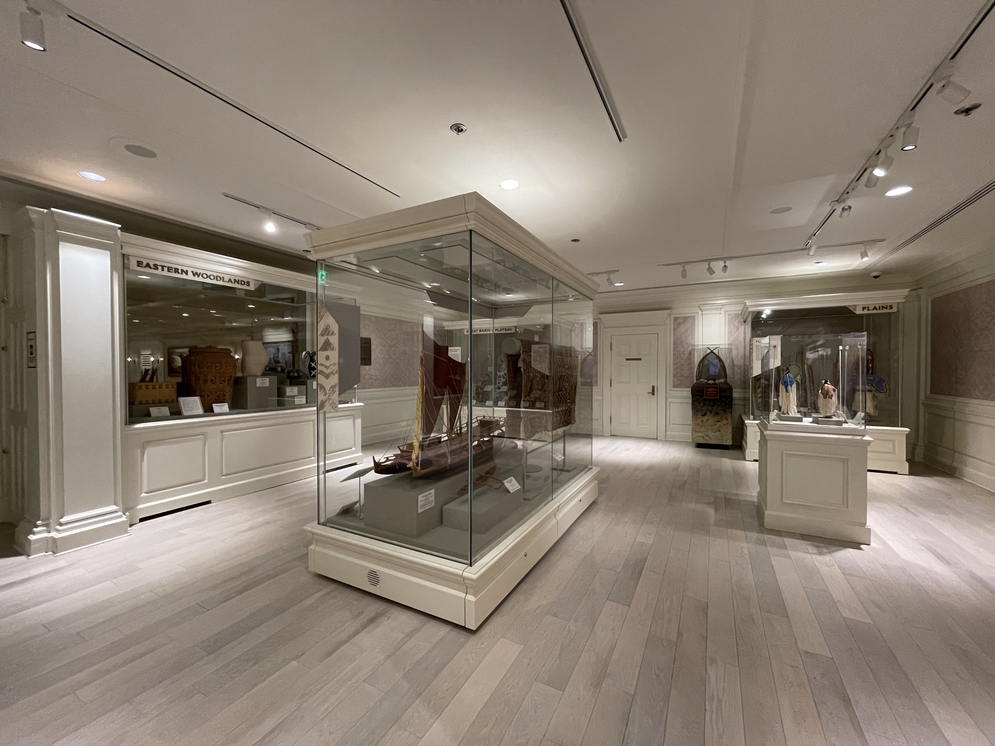 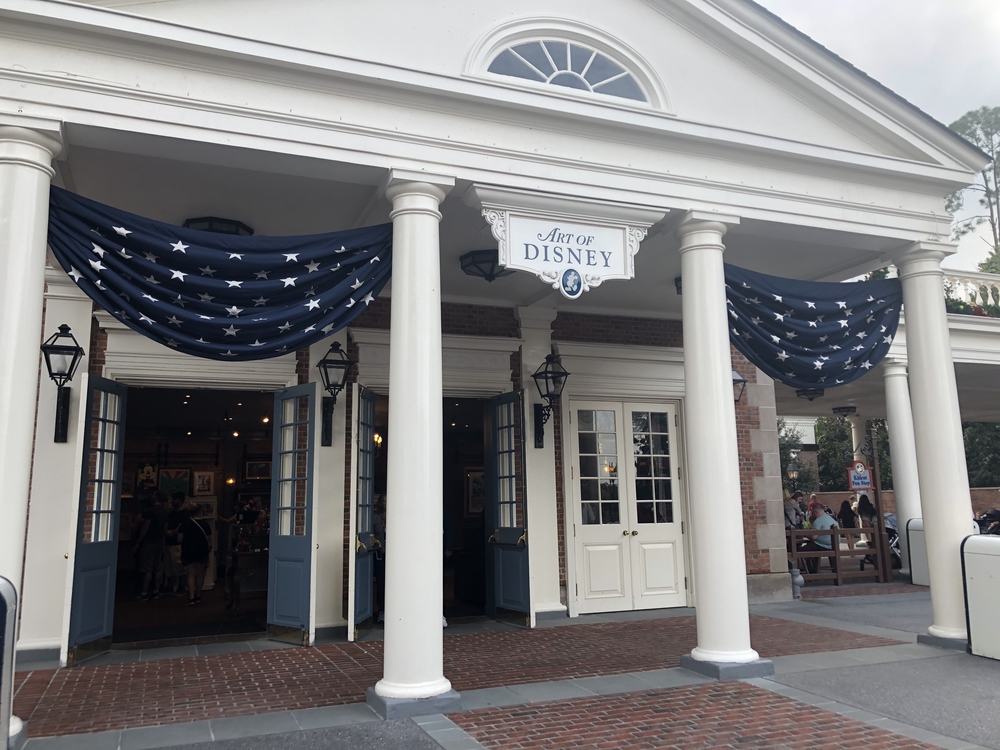 If you’ve stopped by any of the other Art of Disney locations on Walt Disney World property, you are likely familiar with what will be found here at the American Adventure. 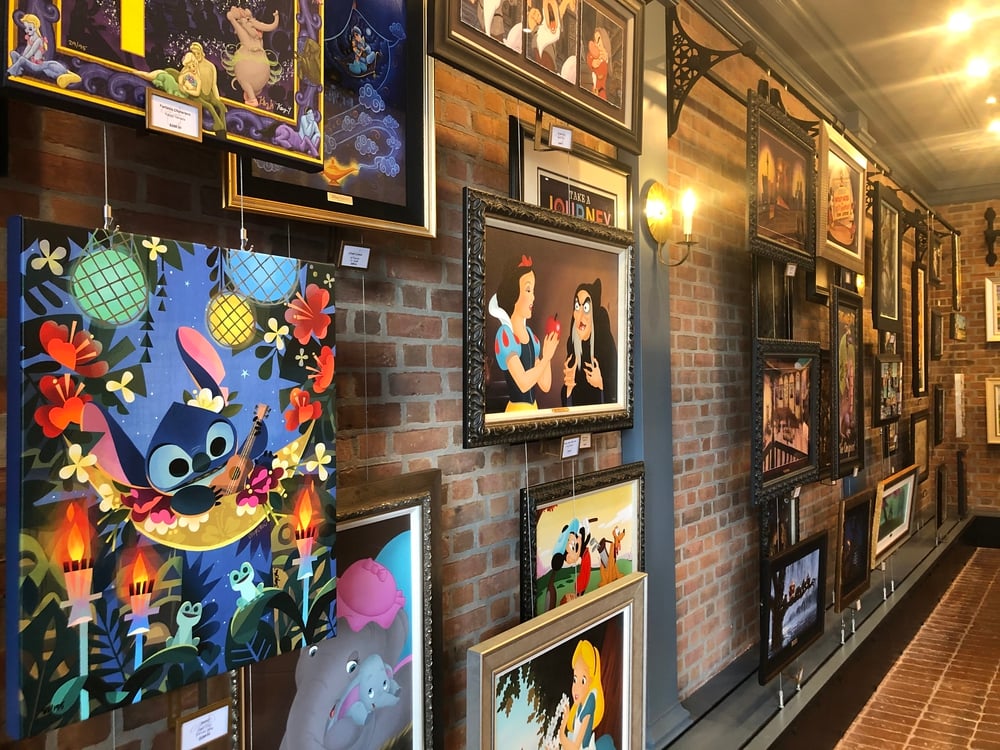 A number of prints, gallery wraps, as well as matted and framed artwork created by Disney artists, can be found here.


FUN FACTS: Although the American Adventure building is actually five stories high, "forced perspective" makes it look only two stories high, so that it accurately reflects colonial architecture (in which buildings were never more than two stories.)

HIDDEN MICKEYS: In the foyer of the American Adventure, check out the three holes on the girder. During the show when the Statue of Liberty is shown and the torch set rises, behind the torch the cloud of smoke forms a Mickey.