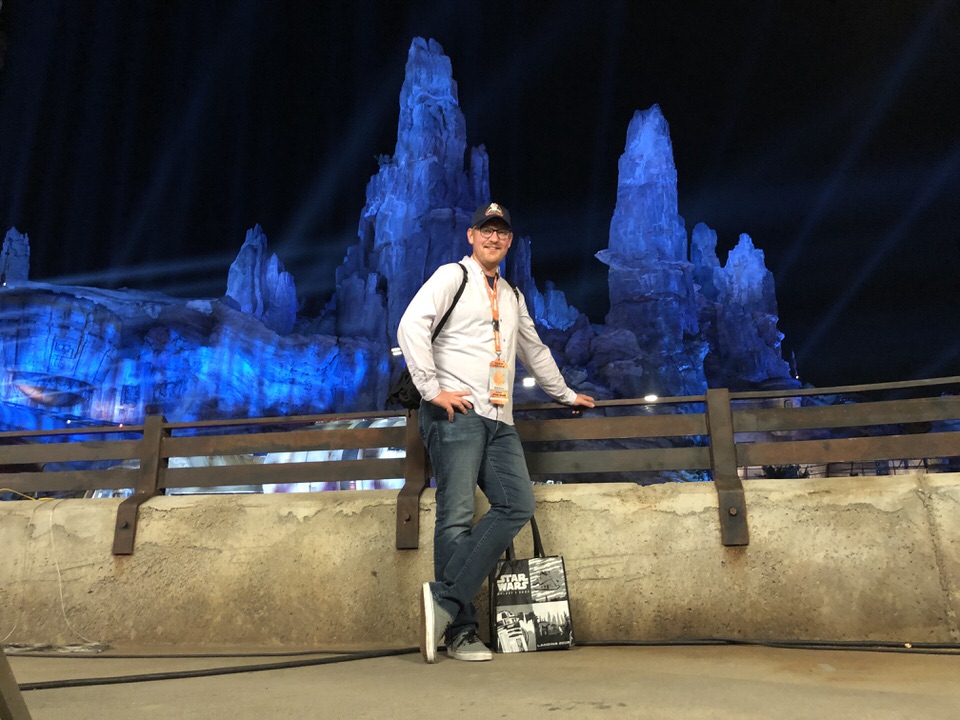 I first started working for The DIS back in 2012 and one of my first experiences with the group was being present at the grand opening of New Fantasyland in the Magic Kingdom as well as the re-imagined Test Track in Epcot. Since then (sorry for the humblebrag), I’ve had the privilege and opportunity to be the first to experience new lands like Pandora – The World of AVATAR and Toy Story Land, but that’s just the tip of the iceberg. Being able to attend a media preview and the grand opening party of Star Wars: Galaxy’s Edge was a huge honor, and also an overwhelming experience on every level. While I experienced Star Wars: Galaxy’s Edge in a non-traditional way, I’m going to do my best to capture what I felt being in the land.

The first thing I want to talk about is the size of the land. We all know at this point that Star Wars: Galaxy’s Edge is the largest expansion in Disney’s history and it truly shows. When I had the chance to tour a small section of Star Wars: Galaxy’s Edge in Disney’s Hollywood Studios, I couldn’t get over the fact that it felt so incredibly long and that is 100 percent what this land is. The Resistance Forest seems to stretch on for ages, but it is completely serene and the natural sounds from Batuu really envelop you into the environment. Strolling through the Marketplace and other areas of Black Spire Outpost, you can tell that it was designed almost to make you feel lost. In fact, the Marketplace was specifically designed to feel like those hidden small marketplaces that sell the most authentic pieces in a foreign city and usually you find it just by wandering. 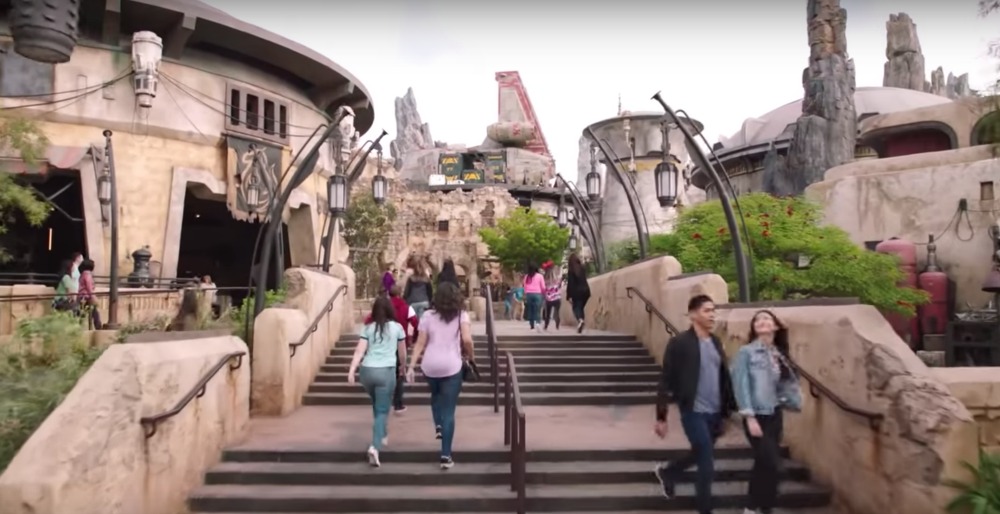 The change in levels is also a valuable tool that helps make the land seem even bigger than it is. There are plenty of stairs to climb, as well as ramps for those who need them, but it messes with your line of sight. You may be standing at the bottom of a stair case looking up at the cargo ship above Docking Bay 7, but by the time you make it to the top you get a grander reveal of also Ronto Roasters, Dok-Ondars Den of Antiquities, and the Millennium Falcon. This land needs to be explored.

Exploration is definitely a valuable tool. If I could recommend one thing, it would be to put down your park map. If you read the map for Star Wars: Galaxy’s Edge, you’ll be able to navigate it slightly better, but you miss out on a key factor in the design. The land was made to look like it has been there for a very long time, and it does accomplish this feat, but you’ll also notice no immediate signage leading you to your destination like you see in the rest of Disneyland. Let’s say you want to find the Droid Depot. You might end up wandering into Dok-Ondar’s Den of Antiquities or the Marketplace, but that’s not a bad thing. It’s a tactic that many recommend when visiting a foreign city and it rings true for Star Wars: Galaxy’s Edge. 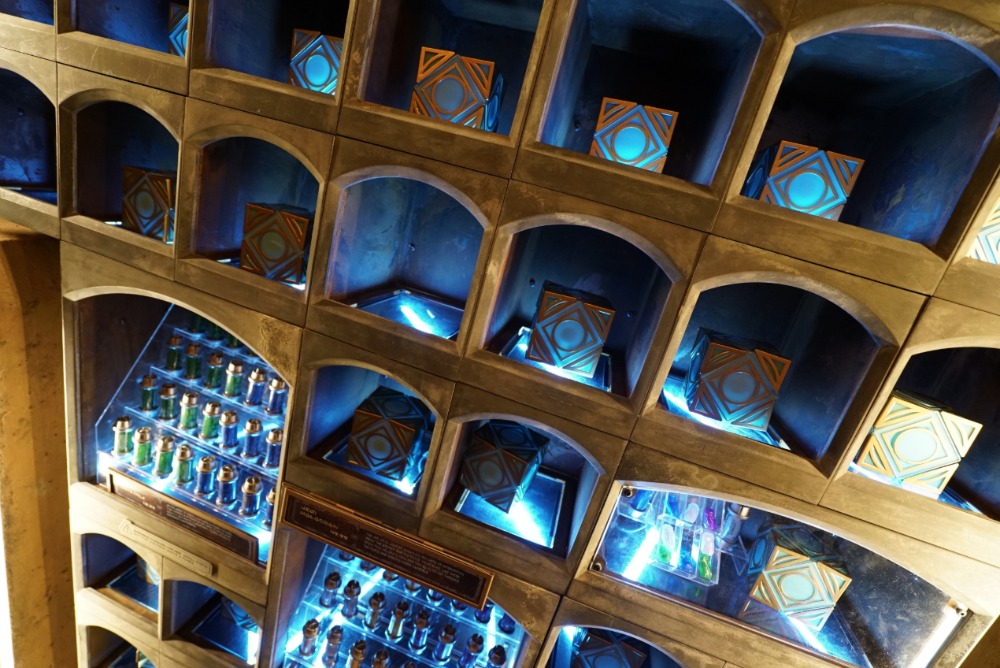 Since I’ve been hovering around merchandise, let’s talk about that. The merchandise is expensive. Disneyland is expensive. It goes hand in hand. This isn’t a critique on Disney constantly raising the price, but it’s also something that needs to be kept in mind with this new land. You don’t have to spend a dime in order to appreciate the details and experience Millennium Falcon: Smuggler’s Run, but if you want food, drinks, or merchandise, you have to pay up. I appreciated the authentic merchandise in the Marketplace the most, but again, most of it was too expensive for me. If you’re on a one-time trip and you can afford to go all out, don’t hold back.

I haven’t had the opportunity yet to build my own lightsaber in Savi’s Workshop or build a droid in the Droid Depot, but I know I definitely will when I’m celebrating a special occasion. Seeing the end products let me know that they are worth the price, but it’s not an everyday purchase for most of the people who are visiting the land. I wasn’t overly impressed by a lot of the other merchandise in the Droid Depot, but each store clearly has its own audience.

I wish I could talk more about the food, but unfortunately I was not able to pay for any to do a thorough review. Our team will be at Star Wars: Galaxy’s Edge on Friday for the official opening and we plan to eat our way through it all, but until then, I have to refrain… to an extent. During the grand opening party, there were plenty of samples going around featuring food from Ronto Roasters, Docking Bay 7, and the Blue and Green Milk Stand. I can’t base my opinion on the samples they gave us, but if I could, I would say that everything was really fantastic and the only thing that was disappointing was the Blue and Green Milk. 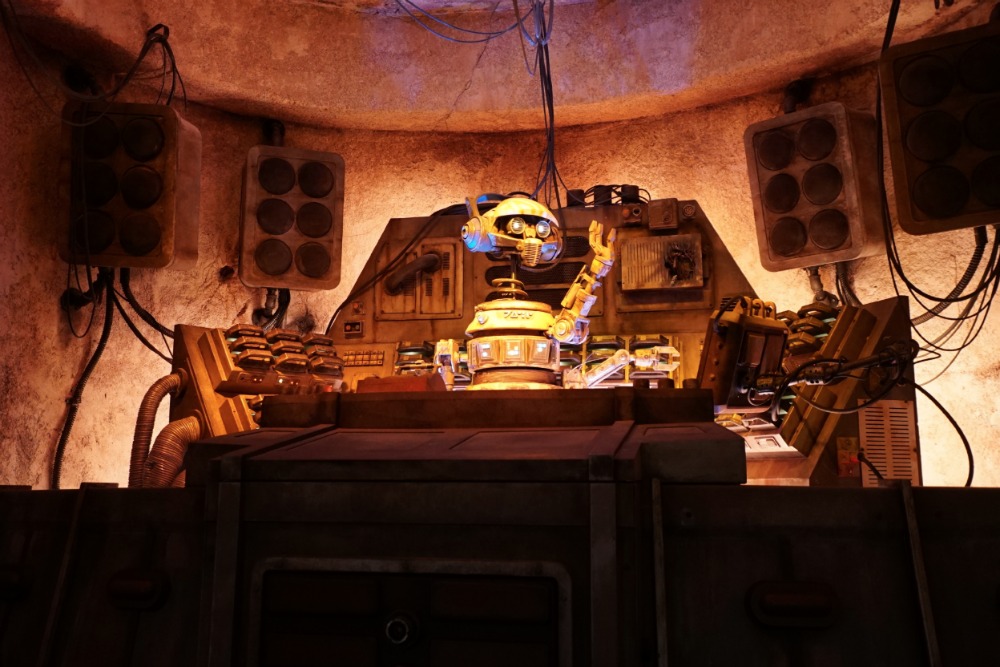 I did have some time in Oga’s Cantina and it is legitimately my favorite part of Black Spire Outpost. A lot of that might have to deal with my love for DJ R3X (who you will remember from the original Star Tours as your pilot), but the place had an energy that clashed with the entire land. It was loud and frantic, but it still had a warmth to it. I lost my mind every time DJ R3X malfunctioned and started back on his Star Tours spiels. As for the drinks, I only was able to sample the Yub Nub and I liked it enough at the time that I will order one for a review, but again, I didn’t pay for it so take that with a grain of salt.

Of course I had to get to Millennium Falcon: Smuggler’s Run. I shared my entire feelings of it in another review and I’d urge you to check that out if you’re interested. Be warned, there are spoilers, but I go as in depth as I can with the experience. For a shortened review, it’s a very fun ride, but it can also be very frustrating if your team is not good at their assigned positions and it can really damage the experience.  There is no way to fix this besides making the ride boring and not being able to control it at all and I’m no suggesting that, but if you have OCD like I do to be the best at everything then you will find yourself frustrated on this attraction when your team doesn’t meet expectations. 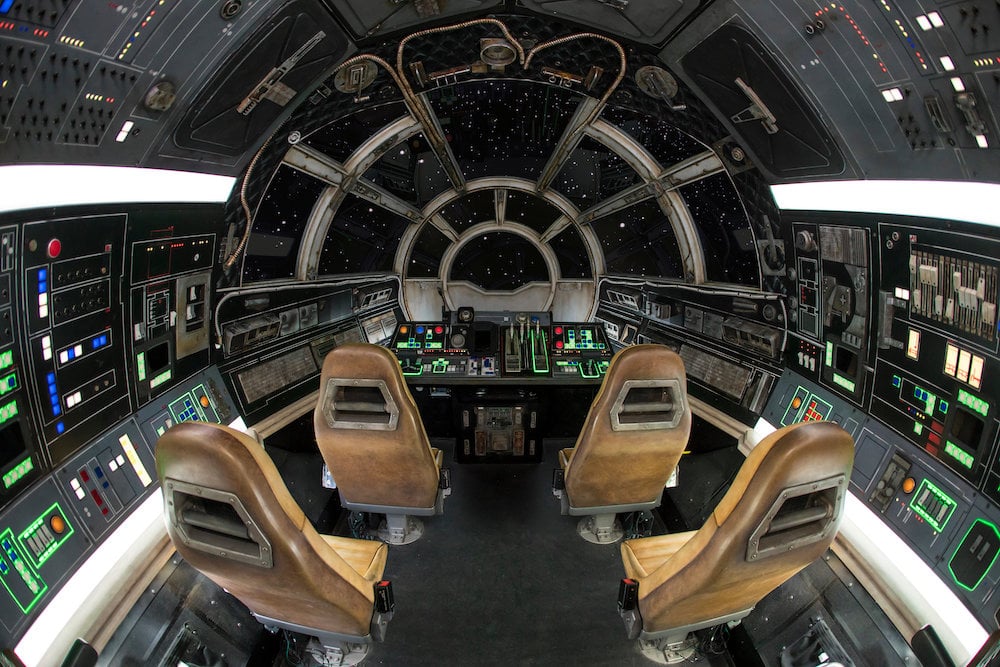 Finally, I don’t have a lot of experience with it, but I feel like I have to mention the interactivity with your phone on the Play Disney Parks app. I have been adamantly against this leading up to the opening of the land, insisting that it was a big misstep in what Disney wanted to accomplish. I can’t say that the general public won’t feel that way, but I think my mind has changed on it. Yes, there are moments where you’re taken out of the zone because you are staring at your phone, but it really does get you to explore and find more locations to interact with. Some tasks utilize augmented reality to help break the barrier between phone and real world, but it’s a pretty neat tool overall.

So, after all this rambling, what do I think of Star Wars: Galaxy’s Edge? It’s unlike anything Disney has created before. I am a huge Star Wars fan, but you won’t have to be in order to love this land. Everything they have done inside is Walt Disney Imagineering working at their very best with big assists from merchandise as well as food and beverage. The Cast Members in the land are staying in character and making the land a truly unique experience and there’s nothing I can really criticize beyond wishing that they would’ve been able to open the entire land at once.

Star Wars: Galaxy’s Edge is a game-changer. Pandora – The World of AVATAR is a huge success, but it is essentially the Diet Coke of Galaxy’s Edge. Everything Disney did with Pandora was just practice to get to this land and they perfected it somewhere along the way. I know there are many out there who are trying to hold off on seeing this land until the crowds are smaller and many are trying to alter last minute trips to get in before the version of the land in Walt Disney World opens, but I say don’t. Star Wars: Galaxy’s Edge changed Disneyland park forever, it will change Walt Disney World, and it’s something that every Disney fan needs to experience as soon as they can.