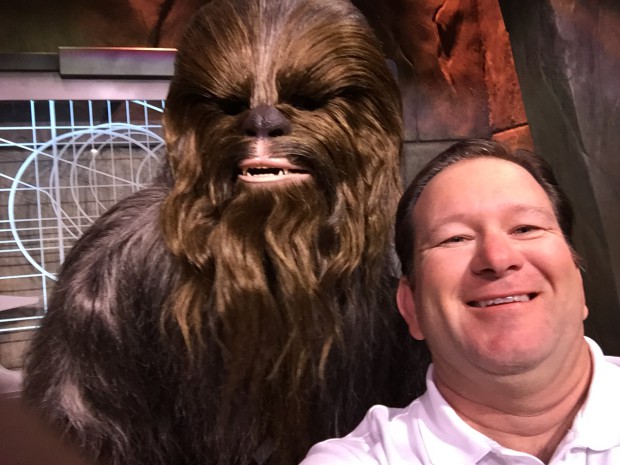 Season of the Force, a celebration of all things Star Wars, takes over much of Tomorrowland at Disneyland Park beginning November 16, 2015. The “home base” for Season of the Force is the new Star Wars Launch Bay that sits in the ground floor of the former Innoventions building, now the Tomorrowland Expo. The Launch Bay features models, costumes and props from across the Star Wars saga, including The Force Awakens.

Inside the Launch Bay, you’ll also find a huge area of Star Wars merchandise large and small, from t-shirts to $6,500 life-size figures.  There’s also a D-Tech On Demand station where you can make a custom Star Wars case for your mobile device.

For the gamers, the Launch Bay features the latest Disney Infinity Star Wars characters, including a special code to open up some exclusive areas when you get home. Finally, the Launch Bay gives you a chance to meet some of your favorite Star Wars characters, currently Darth Vader and Chewbacca.  You know you want that selfie with Chewie….just don’t use a flash. Season of the Force also extends outside the Launch Bay. The Tomorrowland Terrance restaurant has become the Galactic Grill, with food items from the light side and dark side of The Force.   My favorite was The Pastry Menace, an eclair filled with spicy milk chocolate.

You’ll also find some special items over at Pizza Port.

If you need to catch up on your Star Wars lore, you might want to head over to Path of the Jedi playing at the Tomorrowland Theatre for a refresher.  You’ll see clips from both trilogies and glimpse of the new film…along with a few special effects. Season of the Force is also taking over a couple popular Tomorrowland attractions.

At Star Tours: The Adventures Continue, a new scene featuring characters from The Force Awakens has been added.  While Season of the Force is going on, all guests will get to experience the new scene….plus another random scene.

HyperSpace Mountain brings an X-wing and TIE fighter battle to the popular roller coaster, using some of the technology put in place for the Ghost Galaxy overlay, plus some new effects. Finally, in December, Season of the Force adds a new Jedi training experience at the Tomorrowland Terrace stage. At this time, no end date has been announced for Season of the Force.