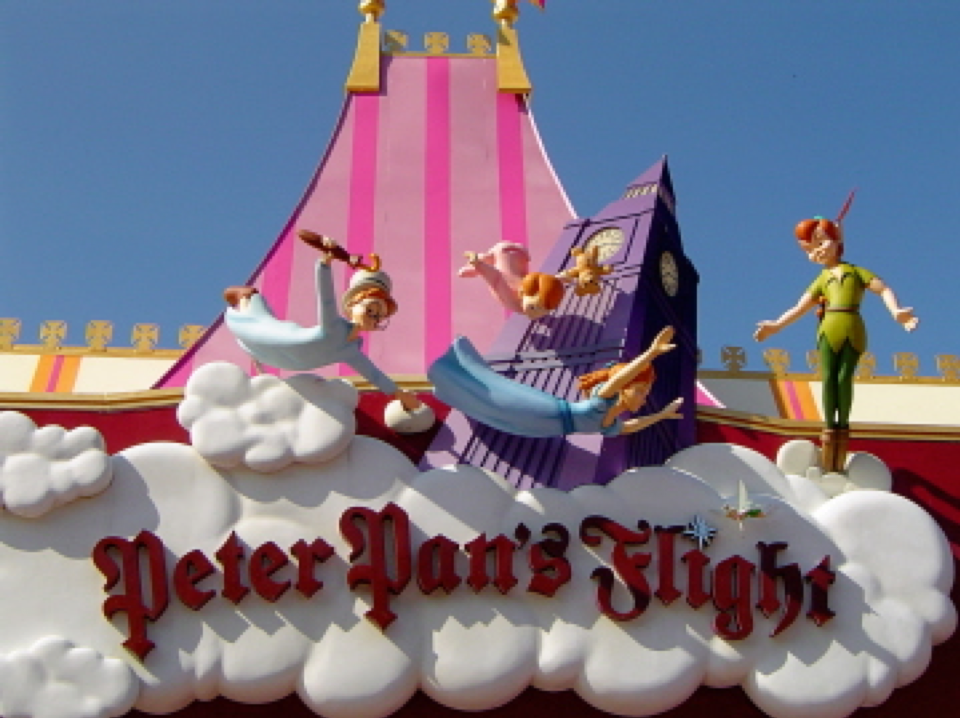 Walt Disney World’s Peter Pan’s Flight is one of Magic Kingdom’s most popular attractions, easily commanding a sixty-minute wait, even on the slowest of days. Located in Fantasyland in both Orlando’s Walt Disney World and Disneyland in California, the attraction frequently requires a concerted strategy in order to avoid a robust queue; even then, a long wait is seen as well worth it.

Why is the attraction so popular? A traditional dark ride, relatively rudimentary technology, and a somewhat brief experience would not normally coalesce into such adoration; however, with a powerful story, movie which is the absolute gem of Disney Animation, and the enduring love of its characters, Peter Pan has clearly found a cozy corner in the hearts of millions of Disney guests around the world.

Peter Pan’s Flight is located in Fantasyland in both Walt Disney World and Disneyland, in which one boards a replica pirate ship and rides above the story of Peter Pan as animated in the 1953 full-length animated feature. As opposed to focusing on a very specific plot point, such as one sees on Mr. Toad’s Wild Ride, this attraction flies guests through a general overview — starting with Wendy’s bedroom, and taking one over London, into Neverland, and showing Pirates, Mermaids, and Native Americans. The technology utilized is undemanding, and primarily consists of either static figures or very simple animatronics with some movement. Peter Pan; or the Boy Who Wouldn’t Grow up (Peter Pan), was written by J. M. Barrie and initially released as a play in 1904. The play and subsequent novelization were unmitigated smash hit sensations which overshadowed Barrie’s other works. The story of Peter Pan was quickly adapted in a variety of forms on the stage and silent film, with the 1924 version in particular praised for its use of special effects. Both film and stage adaptions provided technological challenges, such as how to depict Tinker Bell, which were overcome to the delight of audiences for several decades.

The Disney feature, Peter Pan (released in 1953) epitomizes the unfettered magic churned out in the early days of Disney Animation. Reviews at the time of its release were overwhelmingly positive, with praise directed to the animation. Many, such as the era’s great film critic, Bosley Crowther, did not hesitate to point out the watering down of the story’s grubbier aspects, especially pertaining to issues of maturity and loss. In more recent years, the film has also been subject to peremptory criticism, due to its portrayal of Native Americans. Some of the most iconic aspects of Disney culture have emerged from this film, especially in the form of Tinker Bell and pixie dust. Who amongst us has not extended a humble request for some pixie dust in times of distress and/or anticipated success? Peter Pan’s Flight, with the possible exception of Seven Dwarf’s Mine Train, is one of the most popular attractions in Magic Kingdom. Disneyland California’s Peter Pan’s Flight appears to be of a similar popularity. The Theme Parks Attractions and Strategies forum at Disboards.com is a frequent spot to discuss the availability of FastPass+ and the best area to wait at rope drop (park opening) for this attraction.

So, what about this attraction bestows upon it the venerated status of top billing in some of the world’s busiest theme parks? Simply put, it exemplifies what we all love about Disney Parks, providing an immersive — and now interactive — experience in the queue. Opening in 2014, the queue has been a massive hit with guests. Providing a much-needed respite from the heat, visually stunning imagery of Neverland, portraits of the Darling family, and much more, it is arguably Walt Disney World’s best queue. Also included is a model of the children’s bedroom, and for those unfamiliar with the story, this can remind them of the plot points. There are interactive toys, and guests’ shadows who get sprinkled with pixie dust. And is there anything really more Disney than pixie dust?

This provides an excellent preview for what are also easily some of Disney’s most beautiful ride vehicles: individually colored, ornate pirate ships, through which guests will be transported into the world of the Darling family, London, and finally Neverland. A snap of a cast member’s finger causes the vehicle to seemingly fly up, and oft catches the unsuspecting guest off guard. Peter Pan’s Flight allows guests to fly, with the journey beginning in the Darling’s nursery, traveling over London. Upon arrival in Neverland, we see the mermaids (with a cameo appearance by Ariel), a scene in the Native American village, and finally the climactic battle between Captain Hook and Peter Pan. Music from the beloved film is audible throughout the attraction, from the second your ship begins to fly.

These scenes are either below or adjacent the ship. Technology used is unpretentious and of a seemingly different time. Glow dark paint provides the ability to see the scenes, figures, and animatronics; however, animatronics is probably providing too much credit to figures which have crude and very limited ranges of motion — essentially limited to either moving up and down or from side to side.

This journey into Neverland is dark, simple, and delightful in every way. Simplicity requires one to make use of their imagination, and perhaps this is part of the appeal. Whether you are an adult or child, the music is guaranteed to stir emotion, and in Walt Disney World at least, this attraction is incredibly unique. Exemplifying sound, sight, motion, and sharing in a story from start to finish is what has always set Disney apart, and Peter Pan’s Flight is a faultless example of this. This attraction is short at 2 minutes and 45 seconds, compared to its neighbor “it’s a small world” at 10 minutes and 30 seconds, and Adventureland’s Pirates of the Caribbean at 8 minutes and 30 seconds. Brevity is probably Peter Pan’s Flight’s primary flaw, and considering its popularity, if it were to be re-imagined at some point perhaps this concern will be addressed. One secondary flaw would be the lack of a specific story. While this might seem somewhat silly — the attraction does tell the story of Peter Pan — it is undeviating, and does not provide much in terms of surprise. The strict adherence to the story with no real twist or turn is a pro for many, but to many more, implies a certain lack of imagination.

To some, it is a bit of a head-scratcher as to why this attraction is virtually always subjected to a massive throng. Peter Pan’s Flight tells a story of unbridled gusto, where the imagination of children is allowed to explode forth into the world of Neverland. One of the best queues on Walt Disney World property, a film of the highest esteem, complete theming, and technology which requires one to use ones imagination makes this a truly great attraction.