Three Days in the Life of a D23 Expo Attendee 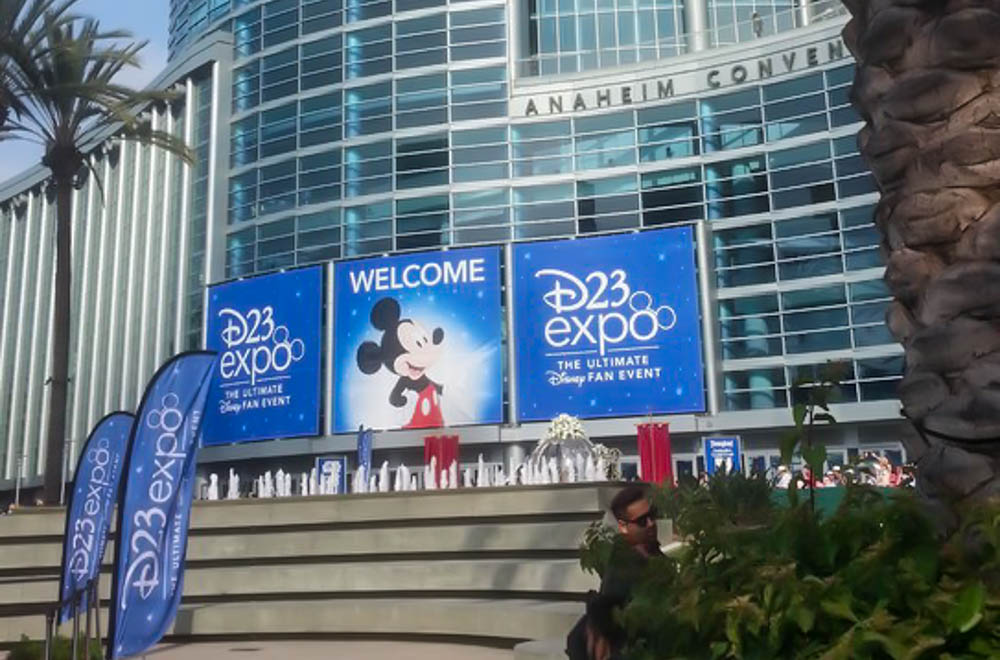 The D23 Expo, regularly subtitled “the ultimate Disney fan event,” attracts hordes of people biennially to the Anaheim Convention Center in California. Many folks are already making travel plans for the next D23 Expo, slated for August 23-25 of 2019. If you are considering attending the D23 Expo for the first time, my goal is not to sway your decision one way or the other. Rather, in this article, I’d like to recount what I was able to accomplish each day of the most recent D23 Expo in 2017.

My hope is to give you an idea of what one person can accomplish over the three-day course of the expo. While the D23 Expo has so many exciting things to experience, one person cannot see and do it all, even with the most carefully drawn out plans. Why? In short, because there is so much going on simultaneously, everything has a line, every line is on a spectrum from long to ridiculous, and the convention staff is not always reliable when you need to ask questions. Having realistic expectations and knowing what bang you can get for your buck is important, in my opinion, because the D23 Expo is not a cheap vacation.

First, I’d like to offer a bit of background information so you can weigh how your experience at a D23 Expo might compare to mine.

My husband and I decided to celebrate our five year wedding anniversary by treating ourselves to a week at Disneyland and the 2017 D23 Expo. Actually, let me be honest with you fine folks. My husband surprised me with a trip to the 2017 D23 Expo as a combined 1st Mother’s Day and 5th Wedding Anniversary gift because the previous Mother’s Day (when I was pregnant with our first child), he decided to gift me a pair of compression socks. Needless to say, he had a lot of making up to do and what better way is there to worm your way back into the favor of your favorite Disney fan? But I digress.

My husband and I were both in our late 20s at the time and have no mobility or major health issues. I mention this because we have traveled with family members who have mobility and health issues, and I do think that our experience would have been very different if we had to take their needs into consideration while attending the expo.

At the time, our only child was 7 months old, and we made the decision to leave her at home with her grandparents. We had decided, although initially wanting to bring her, we would not enjoy ourselves fully and she would be over-stimulated. Looking back, I would have probably lost my mind trying to care for her and experience the things we did.

We had visited the Disneyland Resort previously, but were not familiar with the Anaheim Convention Center or the D23 Expo. I had done some prep before the trip, including printing off the expo schedules, making lists of what we wanted to do, and watching YouTube videos that people had posted from previous expos. For the expo, we purchased 3-day tickets and a gold membership.

We were waiting in the outside line approximately 1 hour before the expo doors opened each day (some people line up much earlier, even camp out overnight, but I need my sleep to be able to tolerate long stints of chaos for three days in a row) and always stayed until the expo closed. We did not leave the convention center to take breaks because we wanted to see as much as we could. The expo ran approximately 9 am to 7 pm each day. We stayed at the Quality Inn and Suites on West Katella Avenue, just down the road from the convention center, and were able to walk to the expo each morning. (I’m very glad we didn’t have to deal with traffic or parking.)

Below you will find descriptions of our daily experiences at the expo. Each evening I recorded our accomplishments in a journal so I could keep track of our trip. I did not record times for everything, but the scheduled times of the panels and shows we attended are listed for reference. 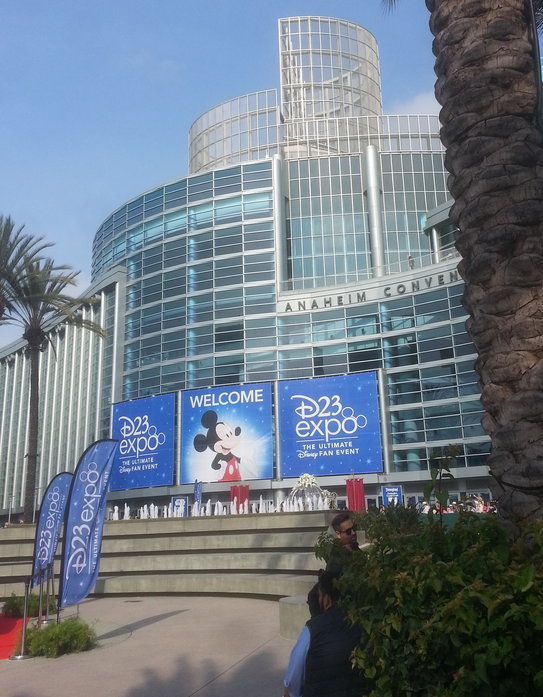 Once inside the convention center, we got into a line for the free D23 gold member gift (I had heard that these might run out early). Unfortunately, we did waste some time because a convention staff member initially directed us into the wrong line. After waiting in the correct line and acquiring our gold member gift, we got into the StagePass line (sort of like a FastPass system for some of the popular panels). After securing a StagePass for an evening panel, we realized we were hungry. We couldn’t believe that we had spent the entire morning in lines: the line to get in the expo center, the incorrect gift line, the correct gift line, and the StagePass line. After waiting in another line for food, we, like many others, found an open section of carpeted floor (every single table was taken), and we ate.

2:00 pm – As fate would have it, our carpet floor picnic was right alongside the route of “The Ultimate Fan Street Party,” which was essentially a mini parade with Disney characters and celebrities (in this case, Stan Lee and Mark Hamill) charioted through the center of the main floor. This was pure dumb luck on our part, but enjoyable nonetheless!

3:00 pm-3:30 pm – We were able to stand around a small stage to view the Voices of Jim Cummings presentation.

After seeing Jim, we immediately got in line for the Disney Legends 30th Anniversary panel (even with a StagePass you are instructed to line up early).

Afterwards, we immediately got into the stand-by line for the Park Stars: Original Characters of the Disney Parks panel, which was supposed to be from 6-7 pm.

After waiting until close to the start time (6 pm), we were informed that the Park Stars panel had reached capacity and we could not view it, so we headed back down to the main floor. 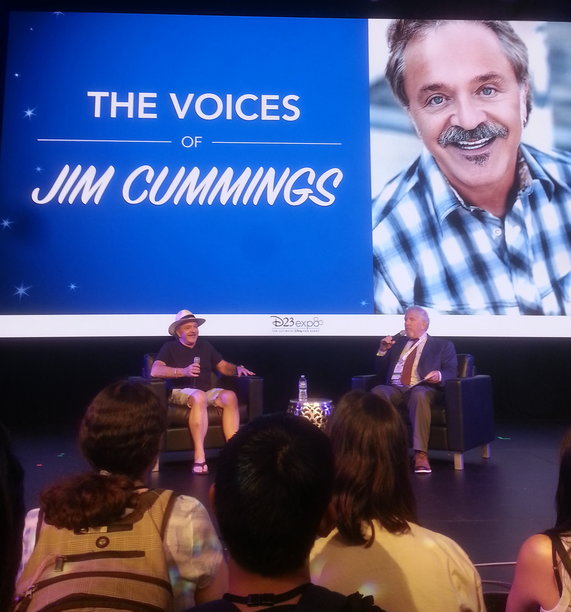 After seeing the crowd mania of the previous day, and knowing how badly I wanted to attend the popular Parks and Resorts panel that afternoon, we headed straight for the queue after getting inside the convention center. We were told that we were not allowed to line up for that panel so early, and yet many other people had already begun to congregate in a line-like form. So, we continued to wait, and thus began our stint in the “unofficial line.” Once it was deemed permissible for the official line to open, we proceeded down an escalator (I’d like to say in an orderly fashion, but a stampede ensued and several people actually got ahead of us) and into a large, for lack of a better term, holding tank where we were given wrist bands and sat on the floor for several hours waiting for the Parks and Resorts panel.

Following the panel, we waited in line for some lunch, then walked around the Show Floor. There are so many booths, demonstrations, performances, and other things to look at on the Show Floor that I won’t describe all of that here.

Last on our list for the day was a wait in line for the Disney Store (approximately 1 hour to get in) and some shopping. 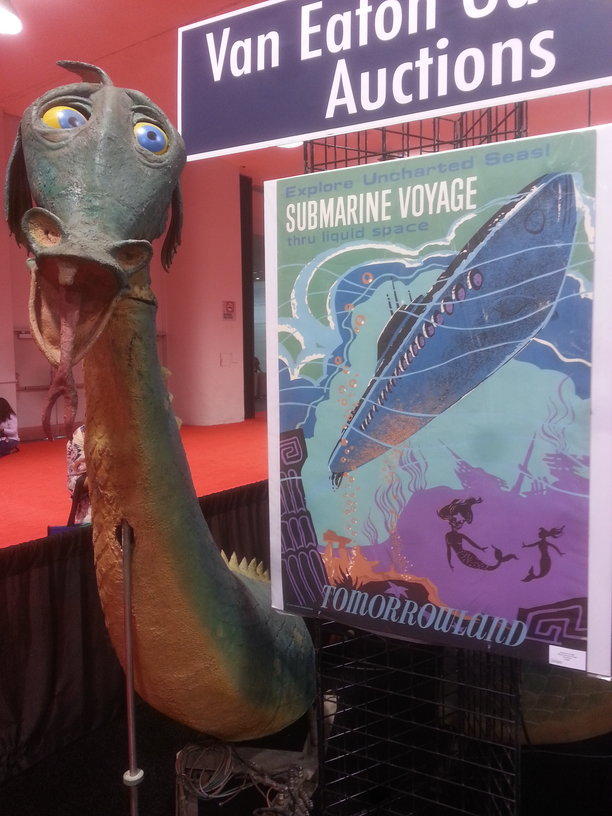 Upon entering the convention center, we immediately got in line for a Lion King panel we were crossing our fingers wouldn’t already be at capacity. We lucked out.

After exiting the Lion King panel, we got right back in line for a Hercules panel which was going to be in the same arena. Luck was on our side again.

After exiting the Hercules panel, we got into the StagePass line and secured passes for an evening panel.

Next, we waited in a line (about 45 minutes) and then perused a Pirates of the Caribbean walk-through exhibit followed by a wait (about 30 minutes) to shop in the Dream Store.

We took a quick break to eat a late lunch, and we actually found seating at a table for the first time!

In the short time we had before the evening panel, we took a final lap around the Show Floor, and I was able to meet Ryno at the DIS booth!

We got in line early for the evening panel (as instructed by our StagePass), and we were fortunate to be waiting alongside and able to chat with Michael Bowling! 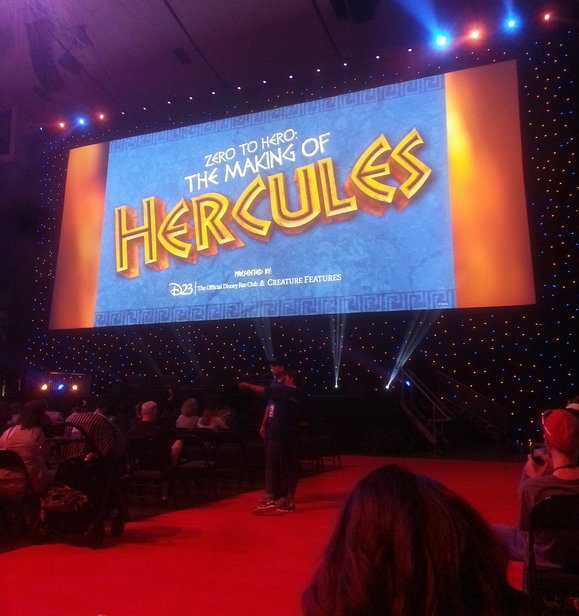 Like any other Disney-centered vacation, the D23 Expo is pricey. While the expo does have many offerings that appear to justify the attendance price tag, keep in mind you will only get to participate in a tiny fraction of those offerings unless you purchase the expensive Sorcerer’s Package (and those are already sold out for the 2019 Expo). Just compare my daily activities to the actual program of events from 2017 (available via a Google search) and keep in mind that we were young and able-bodied, didn’t take breaks, stayed from open to close, and went in with a plan. You just can’t do it all. I will say that I was proud of us for getting as much done as we did, but I still felt disappointed at how much I had to miss.

The crowds and long lines for everything (one day I waited close to twenty minutes just to get into a restroom) are also off-putting; they make Walt Disney World on Christmas Day feel barren. I will say, however, that I am 100% glad that I went. For die-hard Disney fans (I consider myself among you lovely people), you almost definitely will see something (a panel, a presentation, a piece of memorabilia, a celebrity, etc.) that will delight you beyond belief. That being said, I’m not quite ready to go back. While I do consider myself an “ultimate Disney fan” as mentioned in the expo’s subtitle, now that I’ve got that notch in my belt and can say that I’ve done it, I’d much rather spend my money visiting the Disney Parks that I love so dearly.

Although, if my husband is reading this, I would like to let him know that I will still accept D23 Expo tickets as a form of apology for any future trespasses and misjudgments.