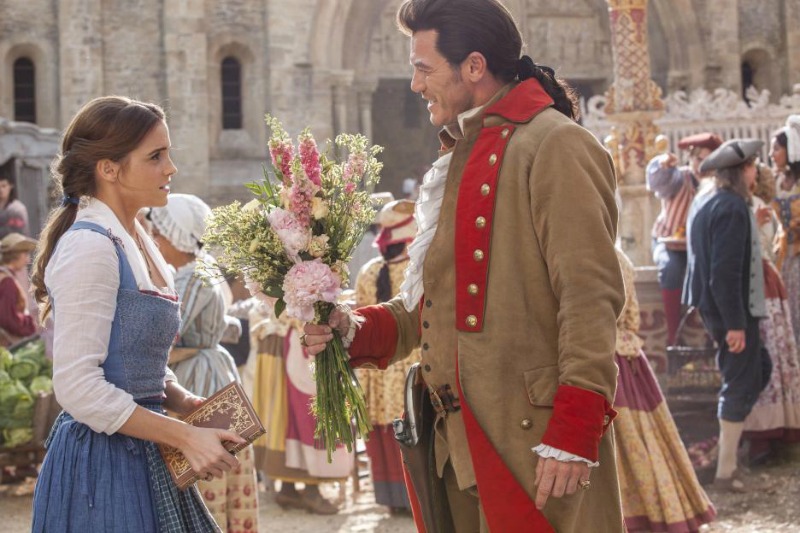 ShareTweetSubscribe
It was only inevitable that the animated classic Beauty and the Beast (1991) would get the live action treatment after previous successes like Maleficent and Alice in Wonderland. Disney made the right call in this case, because the reimagining of Beauty and the Beast is the top domestic film of the year so far bringing in over $500 million, as well as the top worldwide film of the year so far with over $1.2 billion and a solid $10 million more than The Fate of the Furious. I don't think Disney could have predicted Beauty and the Beast would be as huge as it has become. In fact, I believe Disney could've held off awhile longer with this release and milked it for a few more dollars in theaters. Still, if you're a fan of the latest Disney live action reimagining, you'll be very happy to bring it home right now on Blu-ray, DVD, and Digital HD. The movie is presented in three different ways - the original theatrical cut, the theatrical cut with overture, and the sing-along version, with my favorite being the overture that sets the mood for what to expect in the movie like a Broadway play or classic musical from the 1950s. Let's look at the reasons why you should bring home Beauty and the Beast to your collection.

Beauty and the Beast Now many of you who frequent the DIS might remember my somewhat scathing review of Beauty and the Beast back in March when the film hit theaters. While I still wouldn't classify myself as a fan of the movie, I do have to say that I found it to be far more enjoyable when watching it at home on Blu-ray. I won't re-review the movie again, but I will mention several things that helped make the movie better on its home release. First off, I watch and review all of my Blu-rays on a Samsung 55 inch 4K TV. One of my biggest issues from the theater experience was the CGI and character design. Watching at home on a smaller screen took away from some of the great details in the set and costume design, but it did make the mediocre designs of the characters less unpleasant. I was happy that I wasn't nearly as bothered with Lumiere, Mrs. Potts, and of course, the Beast. Also, the inclusion of deleted scenes helped to answer some of the plot holes that left me scratching my head before. The big one involved the entire village forgetting about the castle. In a couple deleted scenes, it is revealed that a ton of the objects in the castle didn't get anamorphic abilities, but are actually humans and that helps to explain why everyone in the town seemed to forget. The prologue explains that they forgot about their loved ones and it didn't make sense to me before that really only Mrs. Potts and Cogsworth had left behind loved ones in the village, but no one knew of the castle. Thanks, deleted scenes. I also had problems with the abilities of some of the cast, and the behind-the-scenes features helped to strengthen my arguments in some cases (cough, Emma Thompson, cough), but surprise me in other ways. Knowing that Dan Stevens (Beast) did all of his acting in a giant body suit and on stilts just to retain that personal connection to Belle left me utterly impressed. Seeing Luke Evans wow the cast by dancing the entire "Gaston" sequence during the table read with only just a few weeks of rehearsal was also a highlight. It was crazy to see which members of the cast were truly the cream of the crop. Despite the issues I have with the film, the world has voted with their money and made Beauty and the Beast a huge success and that is all that matters.

Bonus Features Beauty and the Beast is pretty well packed bonus features and even though some are better than others, most of the features actually enhance the experience of enjoying the movie. Let's take a look at the must watch special features. Another highlight is From Song to Screen: Making the Musical Sequences, which showcases how the filmmakers and cast created "Belle," "Be Our Guest," "Gaston," and "Beauty and the Beast." Making a Moment with Celine Dion is a heartwarming feature where the singer explains the impact that singing "Beauty and the Beast" for the animated featured had on her career and then why it was special for her to be able to sing "How Does a Moment Last Forever" for the end credits. If you're a fan of the updated version of "Beauty and the Beast" with Ariana Grande and John Legend, you can watch a making-of the video as well as the video itself. Finally, if you don't want to watch the full sing-along cut of the movie, you can watch your choice of song as a sing-along music video. I won't beat around the bush. If you were a fan of Beauty and the Beast in theaters, then this Blu-ray is an absolute must-own. If you were on the fence about seeing it, the special features really add to this release and make it worth a blind buy. If you didn't enjoy the film in theaters, but you're a Disney movie collector, then I would still pick this Blu-ray up. Even though I still don't love the film, I am more than happy to have it on my shelf, and I know many people out there will too.