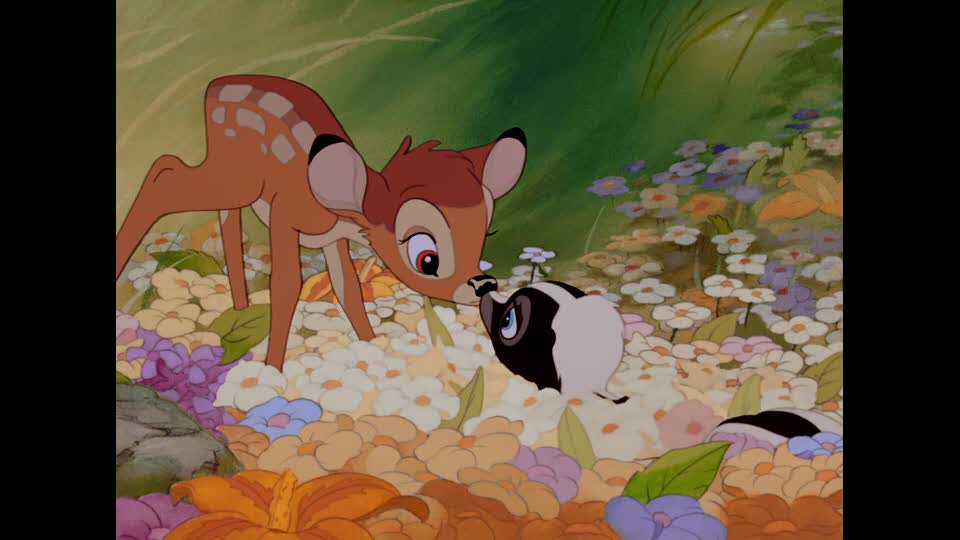 ShareTweetSubscribe
When discussing the greatest Disney films of all-time, no list would be complete without mentioning Bambi. Walt Disney's fifth animated feature is almost a rite of passage and has once again come out of the Disney Vault, but this time as part of the Walt Disney Signature Collection. So far, Snow White and the Seven Dwarfs, Beauty and the Beast, and Pinocchio have all been released as part of the Walt Disney Signature Collection. Bambi has been available once before on Blu-ray as part of the Diamond Edition, but that version did not come with a Digital Copy, unlike the Signature Collection which includes Blu-ray, DVD, and Digital. If you didn't get Bambi the last time it was available to purchase, run out and get this copy right now! If you did pick it up, let's go over what's new to help you decide whether or not you should add this edition to your collection. Bambi What would childhood be without Bambi. I certainly cannot answer that question. I, like many others, was one of the countless individuals who just couldn't understand why Bambi's mother had to die. Beyond that, Bambi is one of the most beautiful Disney animated features to ever be released and a lot of the beauty is in the simplicity. At its roots, Bambi is the story of a young fawn learning his way around the forest, and is one day destined to be the Great Prince of the Forest. Bambi is joined alongside by his pals Thumper and Flower and together they all mature and deal with problems primarily caused by humans. However, as a work of art Bambi is much more complex. The animators spent serious time studying deer and other animals to achieve a realism in the characters unlike anything they worked on previously. The impressionistic, watercolor backgrounds inspired by the late Tyrus Wong set are gorgeous and set each scene perfectly, while keeping the characters at the forefront of the action. The effects used in the film are the culmination of previous efforts to make the animation feel more true to life than ever, and it completely works. Some audiences may find Bambi boring, but as a work of art it is completely stunning.

Bonus Features Like the other Walt Disney Signature Collection releases, Bambi has some brand new content created specifically for this release and the rest of the special features are brought over from the Diamond Edition release. Unless you are a diehard Bambi or Oswald the Lucky Rabbit fan, this new edition might not offer enough to entice an upgrade if you already have the Diamond Edition release. Let's take a look at the new features. Most of the Diamond Edition features are also on this disc, but the highlights are The Making of Bambi: A Prince is Born, which is a six-part making-of the film; Inside the Disney Archives, which takes a look at some of rarely seen artwork of Bambi with Disney Legend Andreas Deja; and The Golden Age. The Old Mill is also featured on the disc, because some of the effects used in the short were a test for Bambi, but it looks rough despite the claim that it was remastered. Finally, the movie can be watched as Inside Walt's Story Meetings: Extended Edition, which is more of a making-of then a way to watch the film, but it is a visual take on commentary tracks and well worth a watch if you're looking for a new way to discover Bambi. There are truly not enough compliments I can give regarding Bambi, but it is 100 percent an absolute must-own for any Disney movie fan. Unless Disney decided to release Bambi in 4K down the road, this is most likely the best copy of the movie you will find and the features are entertaining enough. If you don't already own it or want the digital copy, buy it now, but it is probably unnecessary to double-dip if you already have Bambi in your Blu-ray collection.