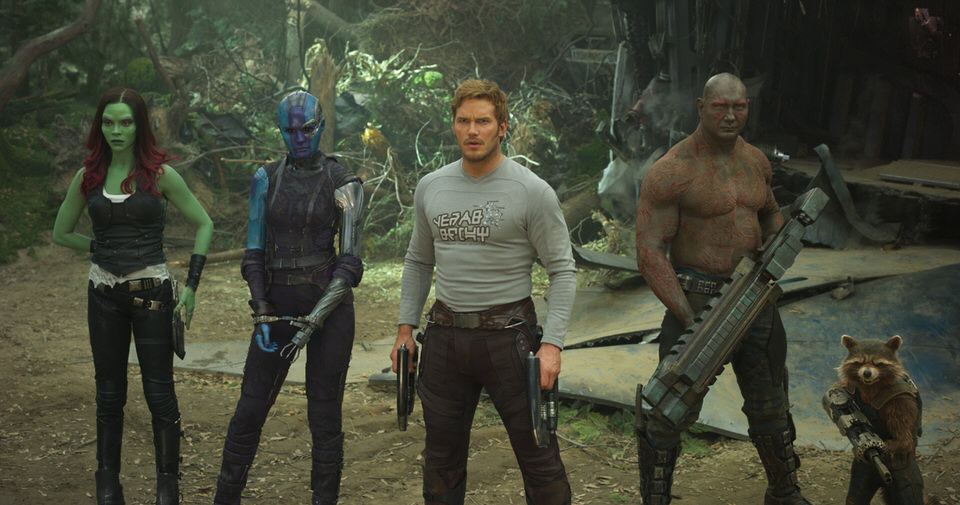 Guardians of the Galaxy Vol. 2

The end of Guardians of the Galaxy was really the beginning of the journey for the newly formed and dysfunctional family consisting of Peter “Star-Lord” Quill (Chris Pratt), Gamora (Zoe Saldana), Drax (Dave Bautista), Rocket Racoon (Bradley Cooper), and Groot (Vin Diesel). Like any family, the Guardians aren’t perfect, and things become complicated when Peter’s estranged father, Ego (Kurt Russell) shows up to reveal the mystery surrounding him. The family theme runs throughout the entire movie, and the Guardians are closer than ever by the end of the movie. I won’t go into the plot anymore for those who haven’t seen the film yet. Writer/Director James Gunn started working on Vol. 2 the day that Guardians of the Galaxy was released, and you can absolutely tell that this movie was a labor of love. Almost the entire cast of characters are fleshed out further than in the original film, with the most development surrounding Drax and perhaps the stand-out character from Vol. 2, Yondu (Michael Rooker). The only reason I can’t give Yondu more credit is the phenomenon of adorableness that is Baby Groot. We knew that a baby version of Groot would be amazing after seeing the dancing Groot at the end of Guardians of the Galaxy, but I don’t think anyone could’ve prepared for how annoyingly cute Baby Groot was in this sequel.

The rest of the cast delivers strong performances and Kurt Russell doesn’t miss a beat with his performance as Ego. Throw in some cameos, including one by Sylvester Stallone, and this is one of the best casts you could ask for outside of an Avengers movie. Add in some of the most visually beautiful environments with a mesmerizing use of color and everything is taken to the next level. Although Gunn believes the soundtrack to the sequel is better than the first, I would disagree. That’s not saying the soundtrack is bad, but it doesn’t have the same impact. A lot of the musical choices in Vol. 2 are specifically serving the plot, whereas the first movie felt more like Gunn chose his favorite songs to make his Awesome Mix Vol. 1. If you haven’t seen Vol. 2 yet, let me reassure you that it absolutely worth a blind buy if you were a fan or own the first in the series. It isn’t better than Guardians of the Galaxy, but it is a great extension of the story.

Guardians of the Galaxy Vol. 2 is somewhat lacking in bonus features, which is disappointing considering that the features available leave a lot to be desired. Nonetheless, there are some gems included that are absolutely worth watching. Now, it should be noted that these are just the features that you’ll find on the physical disc of Guardians of the Galaxy Vol. 2. There are two sets of extras that are available only digitally that add to the collection. The first is a behind-the-scenes of Guardians of the Galaxy – Mission: BREAKOUT! at Disney California Adventure, and if you’re a theme park fan then chances are you’ve already seen everything you need to know about the attraction or you’ve already been on it. The other is a Scene Breakdown that shows the progression from storyboard to raw footage to VFX to the final product of three different scenes in Guardians of the Galaxy Vol. 2. For those of you who are truly interested in how this movie was made, look no further than the scene breakdowns. Over the course of an hour, you’ll learn way more than in the actual making-of featurette. Whether or not you’re a fan of Marvel Studios films, Guardians of the Galaxy and Vol. 2 are both highly entertaining and seem more like Star Wars-inspired stories than comic book movies. So far, the pair of movies is the best origin and sequel that Marvel has created so far and I highly recommend bringing home Vol. 2 if you already own the first, and if you own neither then just splurge for both!