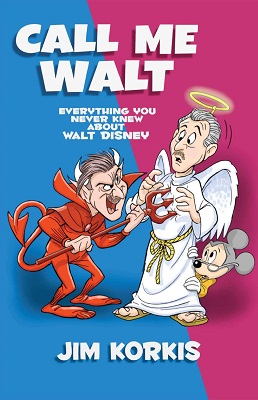 ShareTweetSubscribe
To understand a person's accomplishments, you must understand the person. In his recent book, Call Me Walt: Everything You Never Knew About Walt Disney, Disney historian and author Jim Korkis shares stories about the people and experiences that influenced Walt Disney. This book is not about the animated characters, films, technology, and theme parks Walt created. It is about Walt's character, personality, interests, hobbies, morals, world view, and adventures that guided him towards his accomplishments. Recently, on The DIS Unplugged Connecting with Walt Podcast, Jim took the time to sit down with me and Craig to share some fascinating stories about Walt Disney and a few of the people in his life. Connecting with Walt #43 - Interview with Jim Korkis Part 1 Connecting with Walt #44 - Interview with Jim Korkis Part 2 I've found that many biographies about Walt Disney tend to emphasize his genius by focusing primarily on his accomplishments, speculate on what Walt was thinking without any facts, or demonize him in this age when our society seems to gleefully tear down childhood heroes. In his book, Call Me Walt, Jim shares stories of Walt's youth, his family, and quirkiness. All of Jim's stories come directly from people who knew Walt and worked closely with him. Jim also debunks many myths about Walt Disney that are usually perpetuated by people who never met Walt. Since I was a boy, I've probably read at least a dozen biographies about Walt Disney and countless articles and interviews with people who knew Walt. Yet, there are several facts new to me that I read in Call Me Walt. A rare photo of Walt Disney smoking. Walt did not allow photos to be taken of him smoking. Image provided by Jim Korkis. Walt Disney was the first person to create a brand. When we see "Disney" on an item, whether it's a film, television program, book, video game, what usually comes to mind is that it is wholesome, inclusive, and can be enjoyed by all family members. Walt spent his life ensuring the name Disney represented good family entertainment. When Marty Sklar asked Walt if he could write a brief biography of Walt for the corporate annual report, Walt responded, "Walt Disney is a thing. An image that people have in their minds. And I spent my whole life building it. Walt Disney the person isn't the image, necessarily. I drink and I smoke and there's a whole lot of other things that I do that I don't want to be part of that image. I'm not Walt Disney anymore." Walt never asked people to do something he wasn't willing to do himself. Here's Walt picking up a piece of trash during a walk through Disneyland. Image provided by Jim Korkis. Walt Disney enjoyed a relaxing game of lawn bowling. I've always known Walt's hobbies over the years included polo, miniatures, and trains, but I had no idea he competed in lawn bowling. At his vacation home, Smoke Tree Ranch in Palm Springs, Walt would enter lawn bowling tournaments and even built the Smoke Tree Ranch bowling green. Walt was also a member of the Beverly Hills Lawn Bowling Club. After his passing, Walt's Beverly Hills lawn bowling teammates worked with The Walt Disney Studio to organize an international tournament in Walt's name. Tournaments under Walt's name continue to this day. His hand-tooled lawn bowling bag and lawn bowling balls are on display at The Walt Disney Family Museum in San Francisco. Walt Disney would tease people, but he couldn't take teasing. What's that old saying, "He can dish it out, but he can't take it"? Well, apparently, that applied to Walt. One of Walt's Nine Old Men, Ollie Johnston, said that to improve his employee's work, Walt "was always prodding or needling them." Since Walt was the boss, no one felt comfortable teasing Walt back. Director and Producer Harry Tytle once said, "Walt was a person who could tease, but couldn't be teased. His kidding of a person was often 'on the square,' that is, he meant what he was saying, but passed it off as a joke. When we tried to kid Walt out of good-natured teasing and affection, Walt would look behind the gags wondering what prompted the remark and whether he was being kidded 'on the square,' so it stopped." Walt Disney relaxing with his family in his apartment above the Disneyland Firehouse. Pictured are Sharon Disney, Walt Disney, Ron Miller, Diane Disney-Miller, Lillian Disney. Image provided by Jim Korkis. Walt Disney did not bequest money for the first pregnant man. This is a myth I had never heard before. Reportedly, in recent years the story has circulated that in Walt Disney's last will and testament of March 1966, he stipulated that the first man to get pregnant or give birth would receive millions of dollars, all of Walt Disney World, or the entire Walt Disney Company. Walt Disney's will is a public document and easily accessible. No such statement appears in the document. I can't imagine how this story originated. "Uncle Walt" enjoying a good laugh. Image provided by Jim Korkis. Walt Disney had a witty sense of humor, but did not care to tell jokes nor listening to jokes. Two of Walt's Nine Old Men recalled stories about Walt's humor. Ward Kimball once recalled a party at Walt's home, "At parties at his house, Walt would tell his guests to check their watches because everyday at 7:00 pm, they would be able to hear the coyotes come down and howl. And sure enough, every time at 7:00 pm, the guests would hear howls. Walt had a speaker system set up where he played some of the dog sounds from Lady and the Tramp." Said Frank Thomas of Walt, "He had no equal in acting out a funny piece of business or communicating a humorous idea, but never what might be considered a joke like a stand-up comedian might tell." If you enjoyed these stories, Jim Korkis shares even more with me and Craig on Connecting with Walt and in his book Call Me Walt: Everything You Never Knew About Walt Disney. I am often asked for suggestions on a good biography about Walt Disney. Call Me Walt is a good first book to begin learning about Walt, and it is an excellent book for those who have already read biographies about Walt Disney and want to learn more about the man himself. What is your favorite story about Walt Disney? Is there a story about Walt that is particularly meaningful to you?
ShareTweetSubscribe