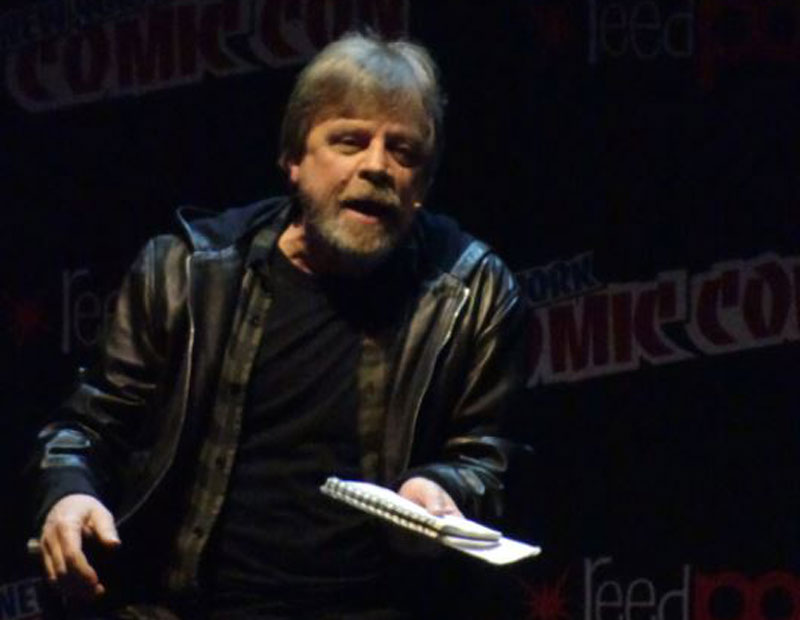 This past weekend, Mark Hamill gave a talk – “An Evening with Mark Hamill” – at the Hammerstein Theatre, as part of this year’s NY Comic Con. Dressed all in black with a hoodie over his head, he came out on stage accompanied by the theme from “Star Wars.”

The evening was billed as “… Mark Hamill talks about his life, his loves, his (Joker) laughs, and about his experiences as two different iconic characters in pop culture history.” He did indeed talk about all of that, but in varying degrees.

As he went from one topic to another, he would say – as different characters – “talk to us about Star Wars.” He’d then say, “Let me get to it in due time. I will get to it.” Although he did “get to it,” the majority of his time was spent on other topics.

The evening was generally good, although the presentation would have been better served by two changes: instead of having the Comic Con logo on the large on-stage video screen, project a live feed of Mark and have a host or moderator guiding the discussion. However, when Hamill did get to the topic of all things “Star Wars,” it was riveting.

GETTING THE ROLE OF LUKE SKYWALKER
“Based on my knowledge of film, Hans Solo would be the lead,” said Hamill. “He was 35 [years old] – he was a leading man. I was sort of like his annoying sidekick – I thought. When I finally got the part and they delivered the script to my one bedroom apartment out there in Malibu … I’ll never forget – I remember the chair I was sitting in looking out at the sunset and the very first page said ‘The Adventures of Luke Starkiller – As Taken from the Journal of the Whills – Saga Number One – The Star Wars. And I said, ‘wait a minute … I thought I was Luke. No, no that must be Harrison.”

Hamill said he didn’t have his original entrance in that film [A New Hope]; the only original entrance in that film or any of the three films was the Empire Strikes Back. “My introductory scene in the first Star Wars was cut,” said Hamill. “And my introduction in Return of the Jedi was cut. By the time I was being described – in the screenplay [it] in the scene that you didn’t see – that was cut.” He goes on to describe the cut scene. “Luke goes from a young cow farm boy. The reason why I liked that cut scene it showed that he wasn’t that popular – he was ridiculed, he wasn’t a popular kid.”

“Anyway, it shows you how clueless Luke is when he tries to rescue a princess [Leia],” continues Hamill. “Which I find hilarious because she obviously didn’t need help from us. She took charge of the entire rescue, which again I think is really very forward thinking in the sense that she had such … organizing skills. She was the leader obviously. I am reading this and thinking ‘wait a minute I must be Luke because Harrison is too old to play it’ so wow what a shock.”

After segueing into talking about his family, being a comic book nerd and giving away some autographed photos, he veered back into Star Wars. He said he purposely made Luke Skywalker as whiny as he possible could. He wanted him to sound like an irritating teenager. “If you don’t immediately establish him as this whiny little guy how can he transition to an expert pilot and potential Jedi,” said Hamill. “I wanted to make that obvious.” Addressing many fans who commented on that, Hamill said, “So it sounded really creepy to me too, but I did it for the part.”

Hamill, like many of his co-stars, didn’t think Star Wars would become this cult phenomenon. Hamill did, however, think Star Wars would be popular – because it was funny. It’s the one thing, he said, was never in any other science fiction movie. “Robots arguing over whose fault it is. They had more depth in their personality than the archetype characters – the farm boy, the princess, the pirate, the wizard and so forth,” said Hamill. “I thought that was a great irony that they gave the droids such neurotic entities.” In addition, even the main characters had their humorous moments. “We risk our lives to save the princess – get her out of the cell, nearly get ourselves killed,” says Hamill. “[and] she looks at the ship we came in and says, ‘You came in that?’”

CARRIE FISHER
While taking questions from the audience, one fan asked him if there was any reason why he should set his DVR on October 9th to tape Monday Night Football on ABC. He was referring to Hamill’s tweet from September 19 when he revealed that there would be a new trailer for Star Wars: The Last Jedi. Hamill tweeted, “Watch Monday Night Football on October 9 – for no reason in particular.” Hamill said he accidentally stumbled into spoiler territory. He then segued into how Carrie Fisher was the queen of giving away spoilers.

“Carrie was the best,” said Hamill. “They make fake chairs [with a pseudonym for the actual film title]. You don’t want to book 50 rooms for ‘Star Wars 7’ right? You wanna book 50 rooms for ‘Blue Harvest’ or ‘Space Bear’ or anything but Star Wars with a number after it. So we got these chairs – Carrie Fisher Space Bear [embroidered on the back] and she plops Gary [her dog] there the first day we’re on set – click – takes a picture and tweets it. I said to her ‘Carrie! You just tweeted the secret title of the movie! And she always does this – ‘Umm … oh … was I not supposed to do that?’ Bless her heart.”

He concluded by saying that Carrie deserves to be here. “I wanted her to go the Emmys … and I wanted her to be there [The Last Jedi premiere in December] because she’s in the movie and her daughter, Billie, is in the movie. She made everything more fun for me. Her timing was exquisite. But in this case, it’s heartbreakingly difficult to even acknowledge the loss. And I’m selfish about it. I talk about, ‘Oh, she would’ve made things so much more fun.’ But think about what Billie’s going through. Not only to lose her mom, but the very next day, her grandmother? It’s just unimaginable. I can’t think of anything quite like it.”

He said he didn’t want to turn it into this perpetual mourning because “Carrie was always about having the most fun all the time,” he said. “Like some latter day Auntie Mame – madcap and crazy. She drove me crazy.”

Before wrapping up an almost two hour talk, he told one final story about he and Carrie. He said they were always in a Twitter war. One day, he asked her – in an email – if she wanted to make Twitter go nuts. He said he found out they were wax figures at Madame Tussauds in London. A friend of his told him the museum would take them through the stage door after hours so they could see their figures.  In the email he wrote, “I’ll pose with Slave Leia and you can pose with me in the black from the last one [The Force Awakens].” He said he hadn’t heard back from her in a while. After a few months had passed, he goes on Twitter and sees pictures that Carrie posted with her posing with the figures at Madame Tussauds. “I went to the studios the next day. I knew she was there for something else. I went right to her trailer.” [Hamill makes a knocking noise]

Carrie: Who is it?

Carrie: Come on in.

Mark: What did you do?

Carrie: What are you talking about?

Mark: Look I wrote you [in an email]. I said it would be so great – we should go visit our wax figures at Madame Tussauds and put it on the internet, people would love it.

Carrie: That’s really a good idea, we should do that.

Mark: You just did it! That was my idea. You didn’t invite me!

Carrie: Oh? Did I? What? Did you say that? Is Mark Hamill in your email address?

Carrie: Oh, that’s probably it. I didn’t recognize your email. Was I not supposed to do that?

“You couldn’t stay mad at her,” said Hamill. “I realized how much like a sister she really is because I love her deeply… You’re going to really love her in this film [The Last Jedi] and I know they’re going to try and find a way to close out her story in 9 that gives her the respect she deserves, because Harrison was more prominent in 7 [The Force Awakens], Luke’s a little more prominent in 8, and certainly Leia was meant to be more prominent in 9… Worldwide, everyone feels that gap she left … Carrie said it’s about family … we all have to hang in there and I think you’re all going to love the movie. And if she’s out there somewhere, we should all give her what she loved best – the one-finger salute. Come on everybody, for Carrie. She. Would. Love. That.” And with that, the entire audience raised their hands in tribute to Carrie.