By Tom Bell - Assistant Editor
www.wdwinfo.com
Posted on May 2, 2019 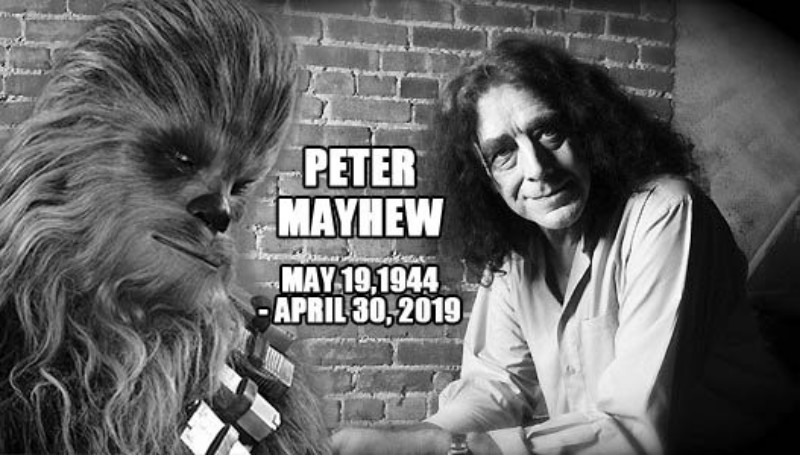 Actor Peter Mayhew, who portrayed Chewbacca in the original Star Wars trilogy, died Tuesday at the age of 74.

Mayhew’s passing was announced by his family in a tweet:

“The family of Peter Mayhew, with deep love and sadness, regrets to share the news that Peter has passed away. He left us the evening of April 30, 2019 with his family by his side in his North Texas home.”

George Lucas brought in 7’3″ Mayhew to play Chewbacca in Star Wars: A New Hope after David Prowse, who Lucas had originally cast for the role, asked to play Darth Vader instead.

He is survived by his wife, Angie, and three children.

Some reactions from social media:

Mark Hamill: He was the gentlest of giants-A big man with an even bigger heart who never failed to make me smile & a loyal friend who I loved dearly-I’m grateful for the memories we shared & I’m a better man for just having known him. Thanks Pete #RIPPeterMayhew #Heartbroken @TheWookieeRoars

Joonas Suatamo: Devastated to hear about the passing of a dear friend and mentor, the great Peter Mayhew. Peter’s warm welcome when I came aboard as his double in The Force Awakens meant so much to me. Studying the character he helped create was always a daunting task, but one that was made easier by his tutelage and kindness as we sought to bring Chewbacca to life for a new generation. He was absolutely one-of-kind gentleman and a legend of unrivaled class and I will miss him. As the entire Star Wars universe grieves over this terrible loss my thoughts and prayers are with his wife Angie and his family and all of the fans whose lives he has impacted. Rest assured his legacy will love on and the spirit that he gave the character when he first donned the suit will never be forgotten. Rest In Peace My Friend.

Billy Dee Williams: Much more than Chewie to me……. My heart hurts….I will miss you my dear friend…..thanks for the great memories!

Bob Iger: The @WaltDisneyCo mourns the loss of our beloved #chewbacca portrayer, #PeterMayhew. Peter was larger than life in so many ways…a gentle giant playing a gentle giant. Rest in peace.

Rian Johnson: RIP Peter Mayhew. To create a beloved character with warmth and humor is a testament to any actor’s spirit. To do it under a half ton of yak hair takes a true legend.

George Lucas: Peter was a wonderful man. He was the closest any human being could be to a Wookiee: big heart, gentle nature…and I learned to always let him win. He was a good friend and I’m saddened by his passing.

Kathleen Kennedy: We are deeply saddened today by the news of Peter Mayhew’s passing. Since 1976, Peter’s iconic portrayal of the loyal, lovable Chewbacca has been absolutely integral to the character’s success, and to the Star Wars saga itself.

JJ Abrams: Peter was the loveliest man…kind and patient, supportive and encouraging. A sweetheart to work with and already deeply missed.