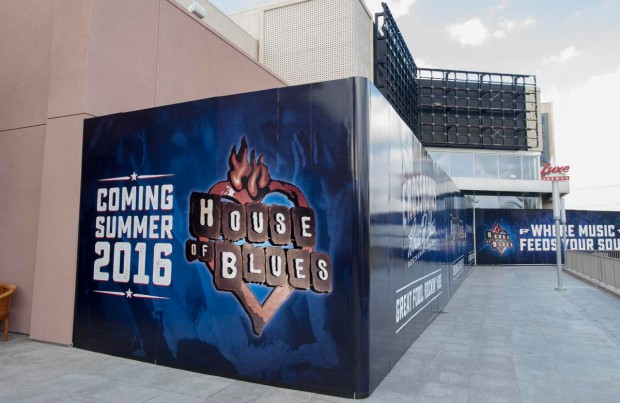 ShareTweetSubscribe
The House of Blues restaurant and entertainment venue at the Disneyland Resort will close on May 31 to begin its move to a larger location at the Anaheim GardenWalk. Live Nation Entertainment, the parent company of House of Blues, confirmed the closing date when it filed a notice with the California Employment Department recently stating that its 300 employees would be laid off until the new location is complete. The new 40,000 square foot venue at GardenWalk will be in part of the building formerly occupied by the UltraLuxe Cinema.  The Downtown Disney space was just 23,000 square feet. Once the new venue opens, all current employees will return along with 100 additional employees. Anaheim GardenWalk, which has struggled with occupancy rates since opening in 2008, is trying to turn itself around by adding the House of Blues, along with a Latin dance club and a Brazilian steakhouse.  A nearby JW Marriott hotel is also being planned. The new House of Blues location is scheduled to open this summer.   Source: Orange County Register
ShareTweetSubscribe