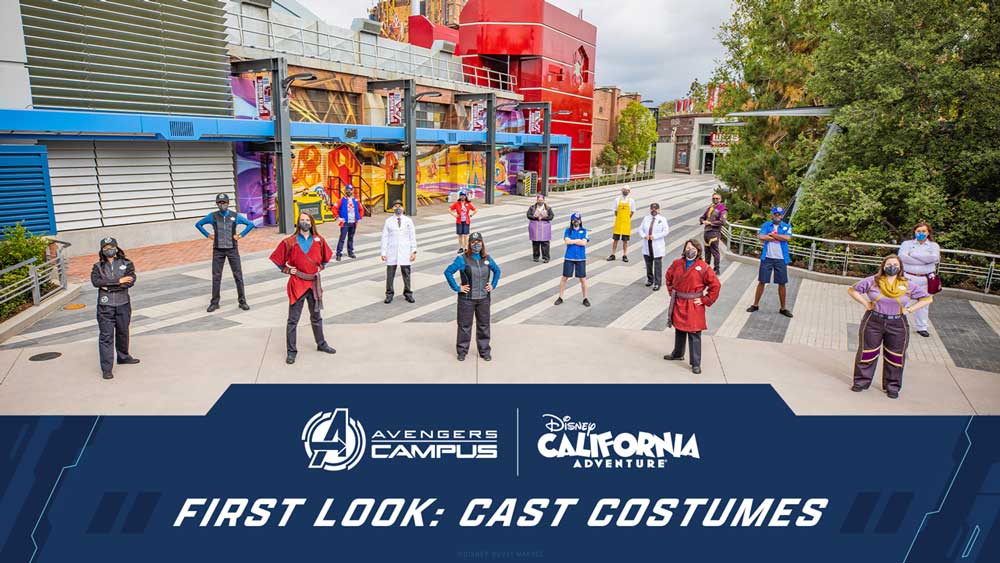 If you are the type of Disney fan who goes crazy for immersive cast member costumes and you also happen to be a fan of the Avengers, today is your lucky day.

The Disney Parks Blog has just shared a first look at the cast member costumes for Avengers Campus opening at Disney California Adventure Park on June 4, 2021.

Inside Avengers Campus, the cast members will be known as campus representatives, and similar to Star Wars: Galaxy’s Edge, the costumes are inspired by each location within the area.

The costumes were designed to be cool and comfortable for the campus representatives and help with the land’s immersive storytelling. Disney’s descriptions follow below with images of the costumes. Let’s take a look!

Campus Representatives at WEB SLINGERS: A Spider-Man Adventure and WEB Suppliers will wear pieces that feature modern, techy emblems and materials made of lightweight, breathable fabrics with stretch for movement and flexibility.

Over at Pym Test Kitchen featuring IMPOSSIBLE, they will take on unique pieces like a Pym pocket protector, lab coat, hat and tie. Giving a nod to the growing and shrinking science used to create shareable bites and sweets at this location, these costumes feature a large “Pym Particle” on the hat and much smaller pattern on the tie.

The campus uniform includes cargo bottoms, a training shirt and a tactical-inspired vest that are comfortable, lightweight and breathable, so cast can be ready to take on any mission that comes their way.

At the Ancient Sanctum, costumes layer unique pieces that cast a dramatic silhouette with rich textures and sewing techniques inspired by the Mystic Arts.

Campus Representatives at both food carts in Avengers Campus will gear up in colorful aprons—one inspired by classic New York City food carts for Shawarma Palace and the other inspired by the second anchor attraction in the land, Guardians of the Galaxy—Mission: BREAKOUT!, for Terran Treats.

Watch the video below for an even closer look at some of the costumes, along with their accessories.