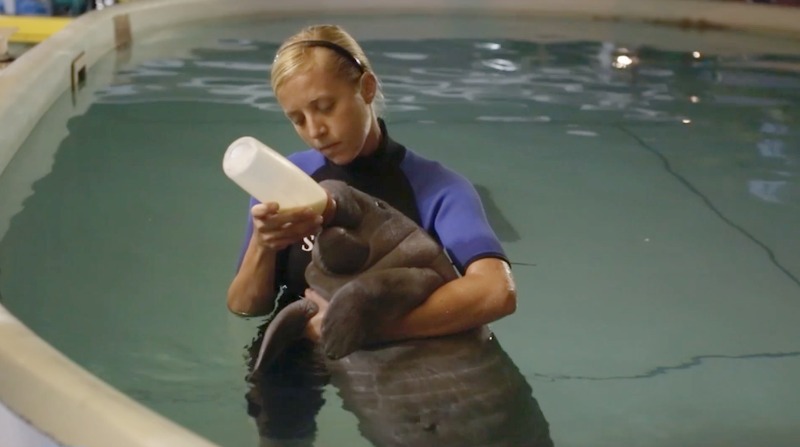 The orphaned manatee calf brought to SeaWorld Orlando during 2017’s Hurricane Irma has officially been named Jose after SeaWorld staff cast their votes.

When Jose first arrived at SeaWorld, he had to be coaxed into his bottle feedings. Animal-Care Specialist Jennifer Parnell played a big part in getting the calf to eat and now says, “He’s been doing really, really well.”

Jose is estimated to be around 5 months old and he now waits by the side of the pool to be fed. Parnell says Jose is the leader in the tank and their two other orphaned baby manatees follow his lead.

Several milestones have been reached by the calf since he was found abandoned and scraped up. He’s tipped the 100-pound mark on the scale and he’s able to digest the oil-filled formula which gives him the nutrition he needs to grow. The calf eats seven times a day, drinking 195 milliliters which is nearly double his consumption from when he first arrived.

The rescue team at SeaWorld is hoping to see Jose continue to gain weight and that he will eventually wean off of the bottle and eat more lettuce.

“Animal rescue at the Orlando park, which includes a team of 14 staffers, cost $10 million in 2016 — an amount no other organization spent, CEO Joel Manby said in May. Since 1974, the Orlando park has rescued 10,094 animals — which includes 597 manatees and 7,316 birds. SeaWorld said last year that its financial goals include $40 million in net cost savings by late 2018. A company spokeswoman said in September that those cuts will not affect the parks’ animal-rescue capacity.”

The orphaned manatee has a while to go before SeaWorld will release him back into the wild. He must weigh 600 pounds and SeaWorld says that this could take approximately two to three years.

“We’re always cautiously optimistic,” Parnell said. “You have good periods and then you might have a few setbacks. That’s why we watch them so closely.”