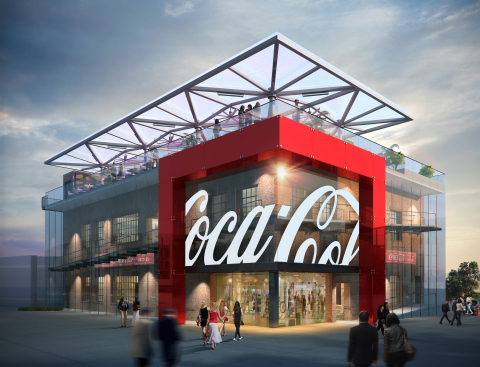 The new Coca-Cola Store and Rooftop Beverage Bar is now open at Disney Springs. This immersive retail store is modeled after a 1920s bottling plant, with a brick exterior and a glass-accented entryway inspired by an iconic green glass Coca-Cola bottle. A 30-foot-wide blown-glass chandelier made of repurposed bottles hangs from the ceiling inside.  A variety of Coca-Cola merchandise is available for sale here, including the 5by20 collection, which are items made by women artisans around the world.

The rooftop beverage bar offers Coca-Cola brands from around the world, frozen drinks, and Coca-Cola Freestyle machines.  Adult beverages are available in the evenings.

Russell Jacobs, General Manager of Retail and Attractions at The Coca-Cola Company, said, “Coca-Cola shares much in common with Disney, including our ability to inspire unique moments of optimism and happiness for our fans.”

Stefanie Miller, Senior Vice President of Strategic Partnership Marketing, said, “We’ve been a proud partner of The Walt Disney Company since 1942, and both brands hold a special place in people’s hearts and minds. Now we’re raising a glass to Coca-Cola Store Orlando, where Disney and Coca-Cola fans alike can truly ‘Taste the Feeling.’”