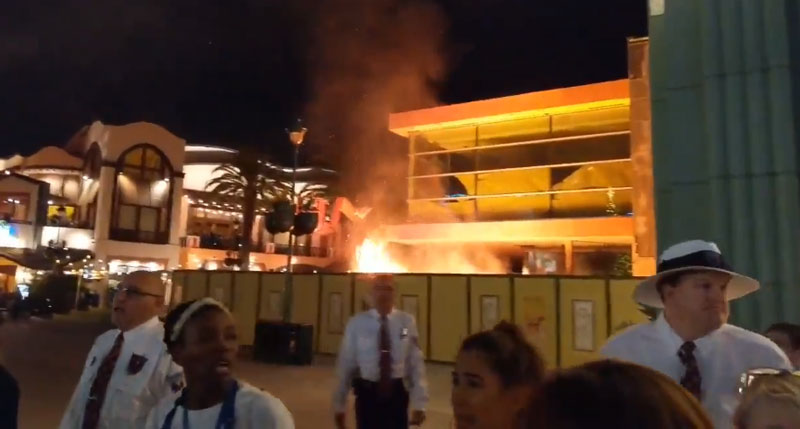 A fire erupted at Anaheim’s Downtown Disney last night and was quickly shared on social media by numerous guests. The blaze appears to have been isolated to the construction site for the upcoming Splitsville Luxury Lanes bowling alley.

Just witness a fire at the old House of Blues in Downtown Disney. It got pretty big and they evacuated everyone. #DowntownDisney #DisneyFire #DowntownDisney

Eating dinner at a Downtown Disney restaurant. There’s a fire outside and the crew is handling it so well I’m pretty sure 90% of the restaurant has no idea. pic.twitter.com/DVRKmRmtvN

According to Patch.com, guests at the district smelled smoke around 9:30 pm. By 9:40 pm, Disneyland Fire Department and Anaheim Fire and Rescue had responded to a 911 call regarding the fire. Anaheim Fire and Rescue Sgt. Darren Wyatt stated, “It was a small dumpster fire in a construction zone near Downtown Disney. The fire was quickly extinguished and operations were back to normal within about 10 minutes. No guests were in danger.”

Although Downtown Disney was evacuated during the blaze, no information is available on the extent of the damage or its cause. Wyatt said, “The cause is under investigation.”