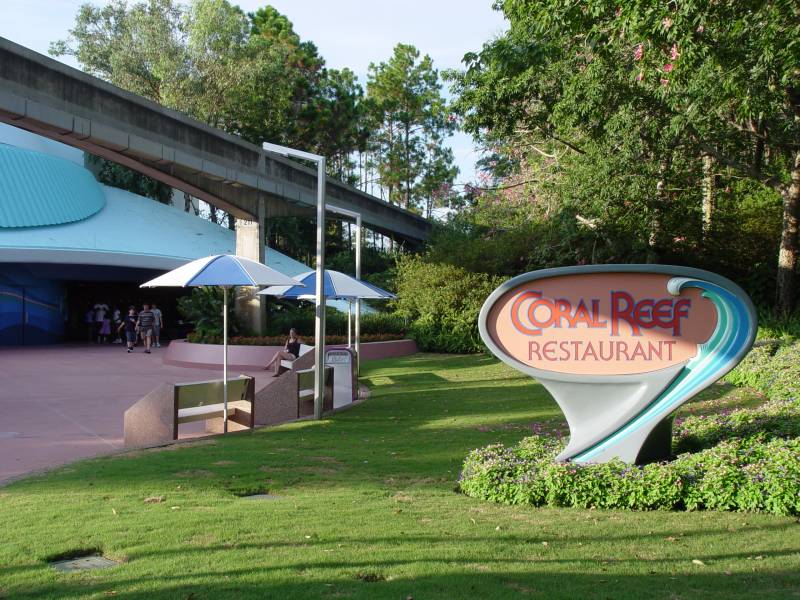 Somewhat hidden next to The Seas with Nemo & Friends attraction in Epcot’s Future World, Coral Reef Restaurant gives guests a break from the heat with its panoramic backdrop of the largest inland saltwater habitat ever built holding enough water to fill 54 Olympic-sized swimming pools! Every table in the restaurant has a great view of the aquarium allowing guests to watch more than 4,000 sea creatures including sharks, sea turtles, rays, and 85 species of tropical fish while they’re dining. You might even see a scuba-diving Mickey Mouse or a guest participating in one of the backstage tours.

Coral Reef Restaurant’s Chef, Keith Schockling, has shared details on a few of his new creations with us today. There are a few new salads such as “a lump crab cake with watercress-citrus salad and a classic remoulade; a seafood salad with Gulf Shrimp and mahi mahi in a citrus marinade with a little kick from serrano peppers, a little sweetness from mango sorbet and crisp plantain chip, and a seasonal house salad – for summer it’s mixed greens, raspberry vinaigrette, fresh berries, feta cheese and sunflower brittle.” The dessert menu even has a new arrival! The citrus bread pudding with whiskey sauce, candied pecans, and salted caramel gelato has been added for a sweet finish. Some of the recipes are a little bit different as well, so you may want to add this restaurant to your list to try on your next visit! Fear not though, the fan-favorite Lobster Bisque remains on the menu.