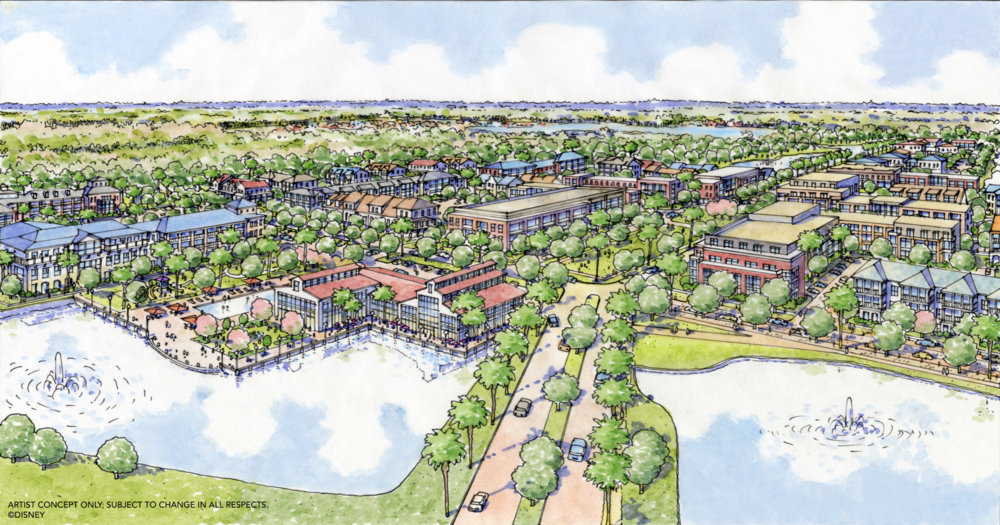 It’s just been announced that Disney is setting aside close to 80 acres of land on which to establish a brand-new affordable housing development.

The development, which will be located in southwest Orange County near the Flamingo Crossings retail and services area, as well as nearby schools, will be available to “qualifying members of the general public,” including cast members. The goal at this time is for the neighborhood to consist of over 1,300 housing units.

The community will be brought to life by a noted affordable housing developer, and additional details will be released in the days ahead.

In many instances in the Central Florida area, private companies, non-profits, and community groups play the largest role in caring for those who are experiencing housing insecurity. Orange County Mayor Jerry Demings had this to say of Disney’s efforts with the new development: “I am very excited that Walt Disney World is stepping up to the plate to help set the standard for corporate engagement in this community by building workforce housing. This is something that we certainly know is a dire need in this community. So, we look forward to working with other businesses to do the same as we endeavor to close the gap between the housing crisis and the lack of affordable housing to having an abundance of workforce housing…”

You can read all of the details from Disney regarding the new community and their efforts to help the Central Florida community, as well as watch as video about the efforts, below.

The new affordable housing development in Central Florida is expected to include more than 1,300 units.  Disney will work with developer to add creative and innovative touches to make it a special place to live.

Walt Disney World Resort will earmark nearly 80 acres of land to bring a new affordable housing development to life in southwest Orange County, Florida. This initiative has been in the works for quite some time and builds on The Walt Disney Company’s long legacy of bringing positive, lasting change to the communities it calls home – making an important difference locally to address one of the nation’s greatest challenges.

This new development, which is still in the early planning stages and subject to appropriate approvals, is expected to include more than 1,300 units and will be constructed by a third-party affordable housing developer on Disney’s land near its Central Florida theme parks. The development will offer residents a variety of home choices that are affordable and attainable, located in close proximity to schools and the new and expanding Flamingo Crossings Town Center retail and dining complex. It will offer a variety of amenities to foster a strong community.

Known for building industry-leading theme parks and resort hotels around the world, Disney will engage the developer to bring  that same innovation, expertise and attention to detail to this initiative. The development will be available for qualifying applicants from the general public, including Disney cast members.

“We are invested in working together with our community to solve complex issues,” said Jeff Vahle, president of Walt Disney World Resort. “The lack of affordable housing is affecting many people across our country, including right here in Central Florida. With this initiative, we’re lending a hand to make a real and meaningful impact in our community by tapping into the best of our company’s strengths. This is the right opportunity and the right time to take action.”

More details about this initiative will be released at a later date as the company continues due diligence work with a prominent affordable housing developer. Disney’s initiative will play an important role as leaders in the community – including Orange County Mayor Jerry L. Demings – continue to prioritize finding lasting solutions to affordable housing in Central Florida.

This new initiative in Central Florida will join additional investments Disney is making in affordable housing. Several years ago, Disneyland Resort led an effort to revitalize the Orange County Housing Trust that provides “last mile” funding for affordable housing projects in Anaheim. This made the Buena Esperanza project — a converted studio apartment community for veterans and homeless individuals with mental illness — a reality. In addition to providing them a place to live, the community offers job placement and mental health and wellness support to residents. As a result of Disney’s investment a second project, Finamore Place, in Anaheim is under construction with an expected completion date of early summer 2022. It will provide over 100 additional housing units. Disneyland Resort will continue to show support for these and other such worthy endeavors.

These initiatives are among the many ways Disney is strengthening its communities, including hundreds of millions of dollars provided in philanthropic donations to local nonprofits, the Disney VoluntEARS program, contributions to local foodbanks and more. Walt Disney World Resort also recently donated $3 million to important causes in the community, including organizations on the front lines of the affordable housing issue.