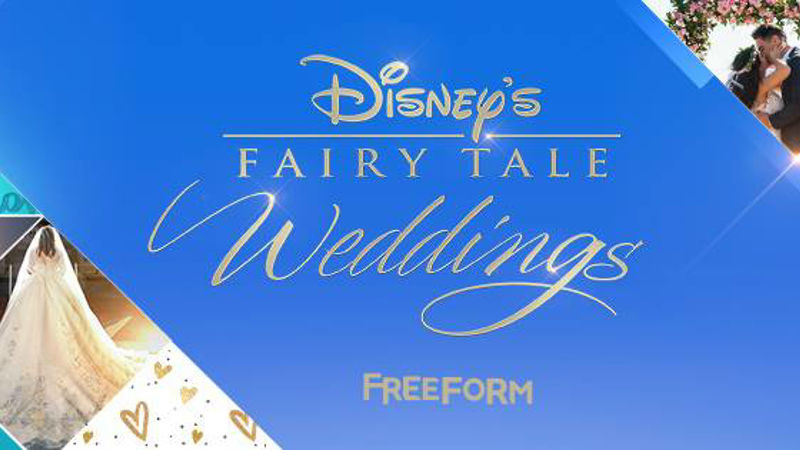 Disney’s Fairy Tale Weddings is set to return to Freeform for a six-episode series beginning Monday, June 11 at 8:00 p.m. Eastern.

Eleven new couples will be featured and the shows will include surprise musical performances, unexpected appearances, captivating celebrations, and lots of Disney magic. From epic hidden camera engagements to romantic fairytale weddings, each episode will showcase enchanting stories and spectacular settings from Disney destinations around the globe. Hosted by real-life couple Stephen “tWitch” Boss (The Ellen Show) and Allison Holker (Dancing with the Stars), the series will show viewers an inside look at the intimate plans of each couple as they celebrate their personal love stories with the assistance of Disney’s Fairy Tale Weddings & Honeymoons.

With stunning venues at the Walt Disney World Resort; Disneyland Resort; Aulani, a Disney Resort & Spa; on Disney Cruise Line ships and more hosting these momentous occasions, each celebration is meticulously planned with heartfelt detail and unforgettable moments for each couple. Two special couples have stories that tie them to stunning musical performances by superstar Olivia Newton-John and country music sensation Hunter Hayes. And, a sports-obsessed couple gets the opportunity of a lifetime when the NHL’s Stanley Cup, one of the most iconic and oldest trophies in professional sports, makes a rare appearance at their reception.

Emily & John
Emily and John are a hockey-loving duo from Chicago that has been on the same team since Emily scored the game-winning goal on John in her pink gloves. Now on John’s 30th trip to Walt Disney World, they are planning an epic wedding that incorporates his Chinese heritage, their mutual love of hockey, and one huge surprise from the Disney’s Fairy Tale Weddings team.

Chelsea & Spencer
Spencer caught Chelsea’s attention by passing her hand-written notes in their first-period class freshman year of high school, and the rest is history. The Orlando pair has always dreamed of getting married at Walt Disney World in front of Cinderella Castle, but they never imagined they would have the whole park to themselves for their heartfelt ceremony and an exclusive viewing of the Happily Ever After projection show for their guests.

Danielle & Nick
Danielle & Nick first said their vows during a humble ceremony in the living room of their Baltimore home. But now this couple, who have always dreamed of a beautiful, country–chic wedding is finally getting a chance to have the celebration they deserve at Disney’s Fort Wilderness Resort complete with a first dance performance they will never forget.

Nicole & David
David first saw Nicole at the gym in their hometown on Long Island, NY and quickly realized that she could be the one. Now, he’s taking Nicole and her daughter Kali on Disney Cruise Line, where Allison & tWitch help him pull off a surprise proposal on the beautiful beaches of Disney’s private island, Castaway Cay.

Gabriela & Tanner
After their engagement at Disneyland Resort, our California-based couple Gabriela and Tanner had an emergency set back, during which all their wedding funds went toward medical expenses. One courthouse wedding, a happy marriage, and two children later, this family is heading to Walt Disney World Resort to give hardworking mom Gabriela the royal treatment in an English country garden wedding fit for a queen.

Britney & Hans
Britney and Hans are the classic story of a lifelong friendship that later blossomed into a fairy tale love. She’s been planning her whole life for this special day and now that she’s finally found her prince charming, this Beverly Hills hairdresser is ready to throw the absolutely fabulous wedding of her dreams, starting with turning Sleeping Beauty Castle … pink!

Lorina & Greg
Lorina and Greg met on an Air Force base in Jacksonville, Arkansas, where he is stationed, and quickly realized they were meant to be. Now, these two are going to be the first couple ever to get married in front of the Tree of Life at Disney’s Animal Kingdom, complete with the iconic evening projection show exclusively playing for their family and friends.

Kelley & Eric
Eric is certain that he has found the love of his life in girlfriend Kelley, whose big heart and passion for helping babies as a neonatal nurse really won him over. Now, the Los Angles couple is taking a dream vacation to Kelley’s favorite resort, Aulani, a Disney Resort and Spa, where Eric is planning the ultimate scavenger hunt proposal and a heartfelt family surprise for his future bride.

Jessica & Myke
These Florida natives had their first date at Walt Disney World Resort, where they spent the entire day kindling a romance that would lead to forever. After the birth of their daughter Kyndal, a new house and a whole lot of love, these three are heading on a Disney cruise to finally become an official family.

Nate & Brian
Nate & Brian, from Dallas, threw a massive fairytale wedding one year ago at Walt Disney World Resort with 200 of their closest family and friends. It’s now time for the newlyweds to return to Walt Disney World to celebrate their anniversary! With the help of Disney’s Fairy Tale Weddings and the cast from Frozen on Broadway, it turns into a truly magical trip they will never forget!

Christina & Jarrod
Pennsylvania couple and childhood sweethearts, Christina and Jarrod, are tying the knot in a gorgeous ceremony at Walt Disney World Resort.  It hasn’t always been the glamorous road for this pair. Christina battled cancer at a young age, during which she took a trip to Disney’s Hollywood Studios and took her wig off in public for the first time ever. Now, she’s making her triumphant return as a survivor to walk down the aisle to marry the man of her dreams.