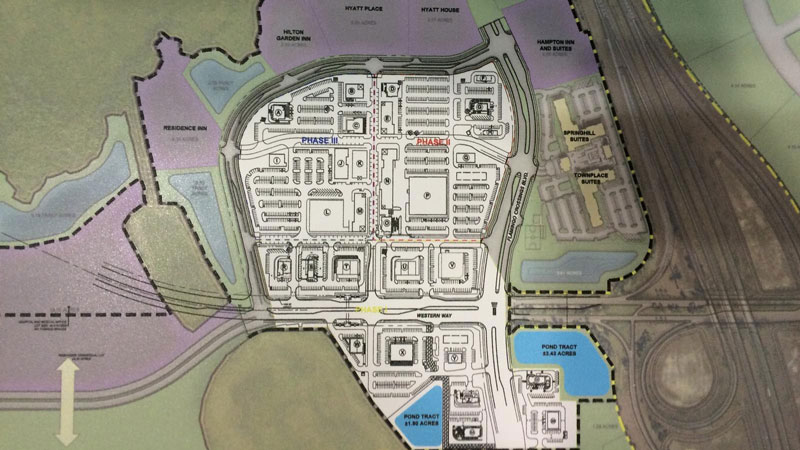 The Walt Disney Company is set to begin work on a project that has been delayed since 2007; retail and restaurant space will be developed in Flamingo Crossings starting in 2018. Disney has plans to build and retain ownership of roughly 237,000 square feet of space located in the area west of S.R. 429.

The project will take place in three phases. Concept art shows the final product to be home to 29 retail and restaurant structures spread over an area of 45 acres.

Development plans for the retail space haven’t been created yet. Disney could lease the land directly or build structures on the property and then lease that space to retailers, according to Henry Thrash, Disney’s senior real estate manager. Any forthcoming development plans would be reviewed by the Reedy Creek Development District rather than Orange County.

At the ICSC Florida Conference & Deal Making Thrash commented on the project; he stated that the first phase should be underway at this time next year.

Flamingo Crossings is expected to support potential business from surrounding hotels, with two currently operational hotels in the area and five more planned for the near future. The existing hotels sites were both purchased by JL Properties, who opened SpringHill Suites by Marriott at the tail end of 2013 and TownPlace Suites by Marriott in the beginning of 2016. JL Properties has also purchased a third site, with plans underway for a Hampton Inn and Suites. According to Thrash, four additional hotel sites have been purchased by Orlando Hotel Group LLC with plans to develop select-service Marriott and Hilton establishments.

Although the four future Orlando Hotel Group LLC hotels had previously been flagged as Hyatt House, Hyatt Place, Residence Inn by Marriott, and Hilton Garden Inn, Thrash said that information may be outdated and those hotels are not confirmed. These project will begin after the retail space is developed or staggered between phases.

Disney has unrelated plans to construct 1,300 intern-housing apartments for its college program and 150,000 square feet of commercial property, both on their 154 acres south of Western Way. Western Way itself is currently undergoing a four-lane extension by the Reedy Creek Improvement District covering the 1.6 miles from the Flamingo Crossings area to Avalon Road.