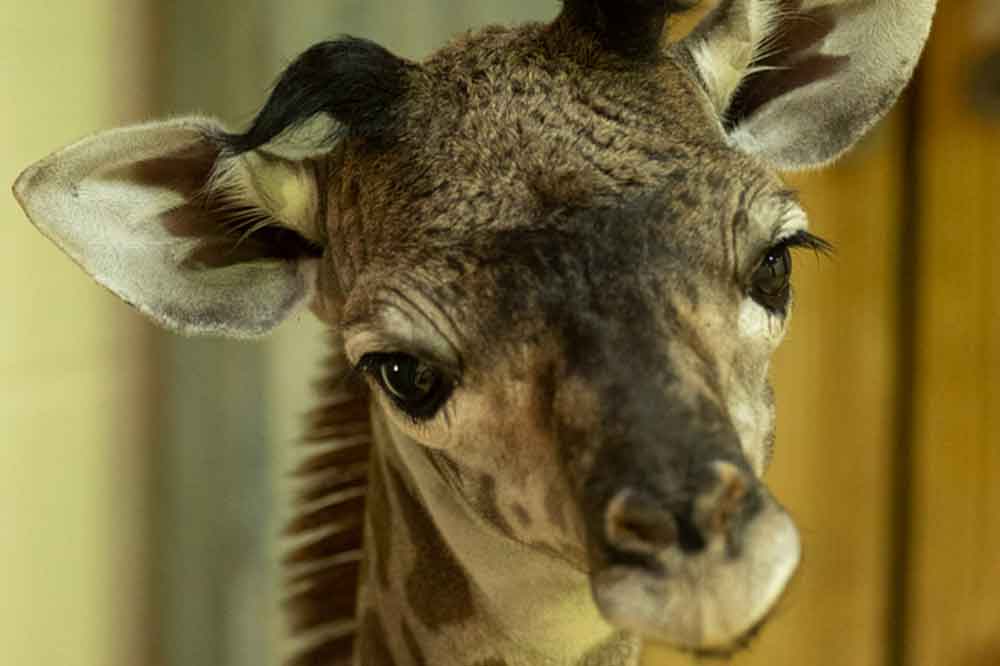 The Disney Parks Blog has shared that on Tuesday, September 22nd, a baby female Masai giraffe was born backstage at Disney’s Animal Kingdom.

The new arrival weighed in at 156 pounds and is healthy and actively nursing. The animal caregivers have reported that the baby was strong and feisty during her neonatal exam. She has not been given a name just yet but will continue to stay backstage with her mom until she meets her expected developmental milestones. She’ll be joining the rest of the herd on the savanna in the coming weeks.

Episode One – Kenya, the Gutsy Giraffe
On the Harambe Wildlife Reserve, Kenya, a Masai giraffe, steps up for a pedicure that could make Disney history as animal keeper Rory and the team attempt to provide unique hoof health by training her to undergo a “nail” trim, voluntarily. Kenya proves to be a very apprehensive patient, but the team perseveres knowing one small step for her is one giant leap for the park’s giraffes. Meanwhile, out on the savanna, African elephant Mac, — the park’s biggest resident — has a routine checkup that reveals a mouthful of mystery. Over in the Affection Section at Rafiki’s Planet Watch, it’s make or break for a much smaller resident, Popcorn, a rescued chicken with an egg problem who requires surgery. Behind the scenes, Disney Imagineers, including the visionary Joe Rohde, dream up a magical palm tree that illuminates the elephants during the park’s evening safari.

Episode Two – Happy Birthday, Gino!
Gino, the most admired western lowland gorilla at Disney’s Animal Kingdom, celebrates his 39th birthday with animal manager Rachel, who’s known Gino since he was a teen. Gino’s presented with a storybook-worthy cake, but festivities are stalled when he struggles to overcome a chest infection. Meanwhile, animal keeper Lori notices a lump on beloved alpha lioness Kinsey, which requires urgent medical attention, but transporting the 300-pound cat to the Veterinary Treatment Room poses a challenge. Over at The Seas with Nemo & Friends at EPCOT, aquarist Amanda, who’s expecting her first child, prepares to welcome another little ray of sunshine into the world: a spotted eagle ray pup. At Discovery Island, trainer Katelyn teaches two newly arrived macaws, Santiago and Emmett, the navigation skills needed to become members of the Winged Encounters flight team.

Episode Three – Betty and the Beast
For the first time in the park’s history, Hartmann’s mountain zebras arrive on the savanna at Disney’s Animal Kingdom! Keeper Meaghan and the team do their best to acclimate the mischievous herd and prepare the other animals to meet their new neighbors, including a curious young Hartmann’s mountain zebra, Clementine, and mom-to-be Prima. Meanwhile, babirusa pig Betty is introduced to a bachelor babirusa, Mentari, with the hope that the plucky pigs hit it off and give the park its first-ever babirusa piglet. At The Seas with Nemo & Friends at EPCOT, an 1,800-pound rescued manatee, Lou, has a potentially infected tail, so keepers must use a crane to lift him out of the aquarium to transport him to the Veterinary Treatment Room for a high-def CT scan.

Episode Four – Meet the Mandrills
Meet the lady mandrills of the Harambe Wildlife Reserve! They’re part of a family known to squabble. To stop the infighting, animal manager Beth and keepers Erin and Kerri decide to throw some testosterone into the mix. They introduce Linus, a hunky new monkey who puts the ‘man’ in mandrill and manages to charm the all-female squad. On the other side of the reserve, animal keeper Nicole has a soft spot for Scooter and Zawadi, a stinky hyena pair with a spotty reputation. She helps them clean up with a spa day that includes tasty treats, a back scratch and a relaxing bubble bath. Over on Maharajah Jungle Trek, animal keeper Susan helps Sohni, an eight-year-old Sumatran tiger, face a tough challenge — undergoing a voluntary blood test. Cassanova, an Abyssinian ground hornbill and a fan-favorite resident of Disney’s Animal Kingdom Lodge, receives a new diet and feather makeover to strut his stuff again. Later, engineers must perform an overnight operation to inspect an underwater fence within the black rhino habitat.

Episode Five – Aardvark Love!
Love is in the air at Disney’s Animal Kingdom as aardvarks Willie and Peanut go on a blind date that could ultimately produce the park’s first-ever aardvark babies. While the lovers prepare for their date, one of the savanna’s resident black rhinos — Badru — works with his beloved keeper, Katie, to undergo a blood draw. At The Seas with Nemo & Friends at EPCOT, rescued manatee Lil Joe has an inflamed lump that needs an extra-special squeeze from Dr. Dan who attempts to drain it; and in the waters of the Safi River on Kilimanjaro Safaris, Mr. Campbell, a massive Nile crocodile, comes in for a checkup for his injured tail, a result of a dust-up with another croc.

Episode Six – Peri’s Prickly Pregnancy
Peri the porcupine is about to give birth to a fuzzy new baby, but following Peri’s persistent sneezing, Dr. Dan and the team step in to help her breathe with greater ease. On the Maharajah Jungle Trek, Anala, a super-smart Sumatran tiger, faces a series of challenging tests to keep her mentally and physically stimulated, earning herself a meaty reward. Over at the Veterinary Treatment Room, Dr. Natalie and specialist Dr. Andrew perform surgery on Stark, a darling newborn steenbok, to straighten up his legs. Dugan, a southern white rhino, enjoys a birthday party and receives a surprise from the local fire department.

Episode Seven – The Big Egg Switcheroo
Big sisters reign supreme in Disney’s Animal Kingdom! On the savanna, teenage African elephant Nadirah is a great babysitter for her little sister, Stella, but her skittishness remains a major growing pain. Animal care experts Erin and Elizabeth must get creative to help Nadirah face her fear and cross a bridge that connects two parts of the elephant habitat. At The Seas with Nemo & Friends at EPCOT, Harry, a rescued green sea turtle, must swim to a specific target for his leafy dinner — a skill he needs in order to graduate to the main tank. At Gorilla Falls Exploration Trail, Alika, a little colobus monkey with a penchant for creating chaos, becomes a big sister — a first for the park! Meanwhile, endangered vultures Carri and Bones try to fill their nest, but when the lovebirds can’t agree on the best way to build a home, animal keeper Tricia steps in to assist.

Episode Eight – Baby Gorilla Grace
Flash, a mature, whitespotted bamboo shark with a plucky streak, bites off more than she can chew and winds up in the emergency room under the care of Dr. Deidre when she swallows an item that’s not on the menu. Meanwhile, baby Grace, a western lowland gorilla, reaches new heights as animal keeper Courtney works with child-development experts to test her motor coordination. At Kilimanjaro Safaris, Gus the hippo makes a ‘frenemy’ out of an older hippo at the river playground; and on the savanna, Dugan, a southern white rhino, learns that love hurts when the female rhinos greet him a bit too enthusiastically.