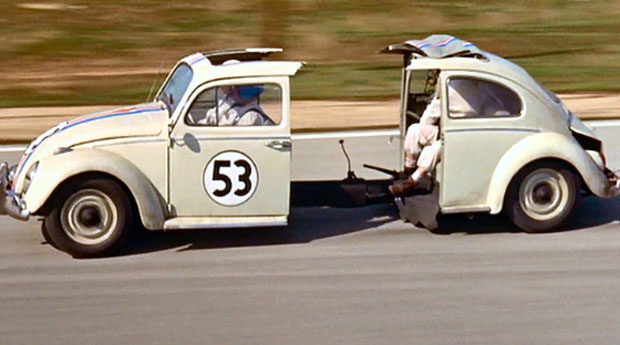 Viewers of Disney XD have a few more things to look forward to, on both sides of the Atlantic. Plans for a remake of the beloved family-friendly Volkswagen Beetle, Herbie, are currently in development. Not just that, but leading up to the release of Spider-Man: Homecoming, Disney XD is going to flood their channels in the U.K. and Ireland with web-slinger content.

TVLine reported that a representative for Disney XD confirmed a potential reboot series is underway based around Herbie. Herbie, the talking VW Bug, has been the centerpiece of numerous projects: The Love Bug (the 1968 film, and his first appearance); Herbie, The Love Bug (a 1982 television series); and Herbie: Fully Loaded (the 2005 film starring Lindsay Lohan).

The new series will be written by Travis Braun (Criminal Minds: Beyond Borders) and Tom Burkhard and Matt Dearborn (Zeke and Luther, Even Stevens) will serve as executive producers. As far the cast is concerned, TVLine states that Disney XD is currently on the lookout for a boy or girl to cast as the lead role.

Here is their description of the possible lead: “Lili/Landon is ‘part scientist, part entrepreneur, part daredevil’ and realizes, when her/his parents go missing, that they’ve secretly been working on a government project: a talking car named Herbie. Herbie is key to helping the kid reunite with her/his parents, but a gang of criminals also wants to get its paws on the state-of-the-art vehicle.” Reboots are something Spider-Man fans are more than familiar with by now, but for the run-up to the newest version of Spidey, Disney XD has something special in mind. On July 3rd, Disney XD’s channels in the United Kingdom and Ireland will begin a month long celebration of the wall-crawler in promotion for the release of Spider-Man: Homecoming.

Sky and Virgin Disney Xd + 1 will be playing the entire run of Ultimate Spider-Man, which features Drake Bell (Drake & Josh) as the voice of Peter Parker. Disney XD will premiere a 15-minute behind-the-scenes special for Spider-Man: Homecoming, as well as six shorts about the web-head’s origin.

“This is the first time that we have created a takeover dedicated to Spider-Man, arguably one of the most popular characters from the Marvel universe and one of Stan Lee’s most venerated creations,” Disney Channel UK’s David Levine said today,”The wall-crawler continues to draw kids to Disney XD so what better way to pay tribute to his genius than by giving him his own channel throughout the month of July when the whole world will be going Spidey crazy.”

Spider-Man: Homecoming opens in U.K. theaters on July 5th and opens in the U.S. on July 7th.