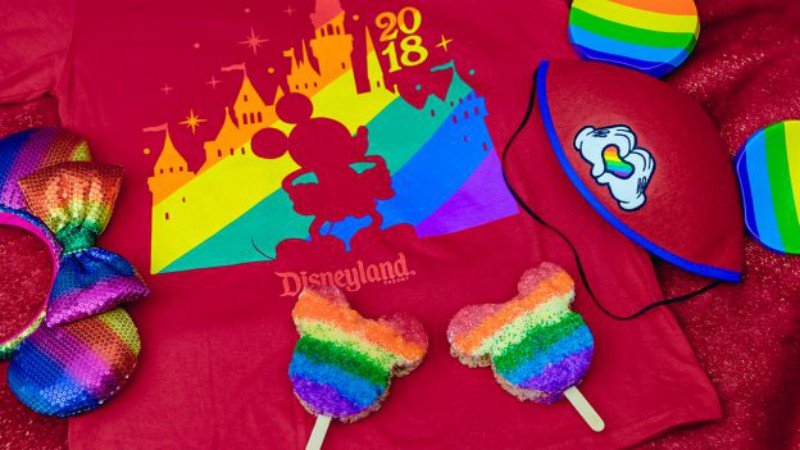 Although Gay Days in an unofficial event, every year the Disneyland Resort features a menu of special rainbow colored treats and highlights their rainbow merchandise, and this year is no exception.

While some of the merchandise is around all year long, many of these treats are only available this weekend! Look for the the rainbow colored World of Color Crispy Treat in candy shops around the resort, including Candy Palace, Trolley Treats, and Marceline’s Confectionery. The Rainbow Cake is back and can be found at Plaza Inn, Pacific Wharf Cafe, Flo’s V8 Cafe, and Paradise Garden Grill. Schmoozies will have a Rainbow Rock Shake made with rainbow cereal, and nearby Award Wieners will be frying up Rainbow Funnel Cake Fries. Another limited-time offering is the Rainbow Tumbler, which can be found filled with soda or a slushy at kiosks and quick service restaurants around the parks.

Finally, if you’ve forgotten to pack your Rainbow Ear Hat, red shirt, or Rainbow Mickey Pin, the Disneyland Resort has you covered with a large selection of rainbow merchandise. Again, much of the merchandise can be found all year long, but many of the treats…including that incredible Rainbow Cake…can only be found this weekend!