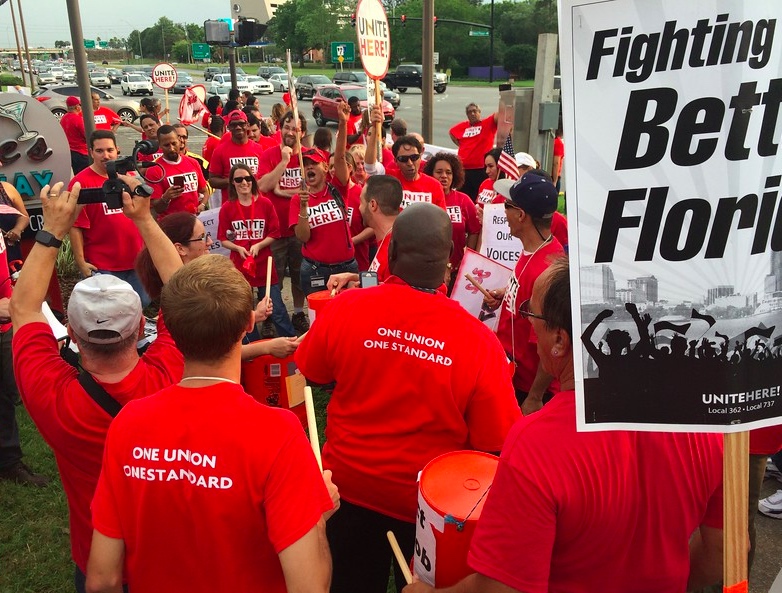 These cafeteria workers are the ones who work backstage, serving meals to the park’s cast members while on duty. The workers say their lack of representation leads to “erratic scheduling, short-notice relocation, and retaliatory action if they complain about their situation.”

Sammy Torres, a chef at Sodexo, says, “I talk to people who deal with last-minute schedule changes, switched shifts. I know workers who are living in their cars. We’re trying to get better benefits and show we’re not paid enough. I’m 46. There’s no retirement plans. I’ve been fighting this for a while now. We’re going to keep fighting.”

In These Times states, “UNITE HERE has had success winning unions for other Sodexo workers throughout the country. Sodexo claims hundreds of collective bargaining agreements, but Disney insists they can’t force an outside company to change its policies.”

William Lawson, a field representative at the Central Florida AFL-CIO, said in a blog post, “Disney is already a hotbed for organized labor but you can’t get your one gold star and then stop there. There is absolutely no earthly reason why the largest employer in Central Florida, one of the most profitable entities on the face of this planet, and a household name in supposed moral virtuousness should have workers living in cars or on the street. It’s unconscionable and ‘We can’t tell another company what to do’ is not a valid excuse.”

News source/photo credit: In These Times