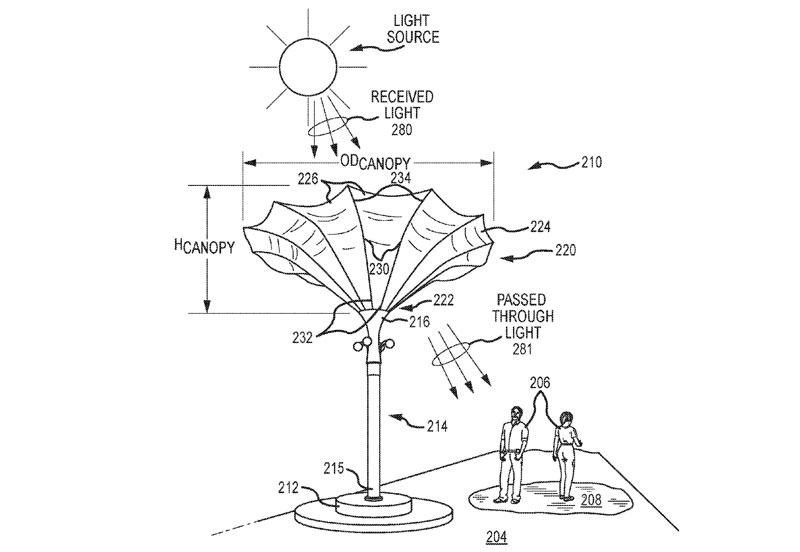 If a new patent is put into use, guests at Disney parks may soon get a reprieve from the harsh weather conditions they are accustomed to.

A patent under the title “Deployable Shading Structure” outlines the use of canopies that could be deployed and retracted dependent on when Disney feels they are needed, allowing unobstructed views when not in use, and able to be themed as the parks see fit.

Basically, a canopy is housed in a pole-like structure and could be deployed with either a manual trigger or by using automated sensors that would factor in the number of guests in an area and current weather conditions (amount of sunlight/rain). Here is the patent’s description of the canopy itself:

“The canopy, in some embodiments, is formed of a material with pores or mesh-like openings sized and shaped so that the canopy is at least partially air and water permeable so that the canopy does not behave like a sail or kite. The canopy may be circular, square, or some other shape, and, when deployed, may generally be shaped as an upward facing cup or saucer (or upward facing flower) with each of its web segments (e.g., portions of the canopy extending between support ribs or arms) having an arched or arcuate shape when viewed from the side from the center of the canopy to the outer edges.”

The structures would also have the option of full or partial deployment, depending on need.

As must be mentioned any time a patent is reported on, not all patents end up seeing use. Given the oftentimes chaotic weather that guests experience in Disney parks, specifically the frequent periods of intense sun and rain at Walt Disney World, it would not be surprising to see this technology makes its way onto Disney property. At the very least, we know the problem is being worked on.

Below are more images from the patent that give an idea on what it would look like during implementation.