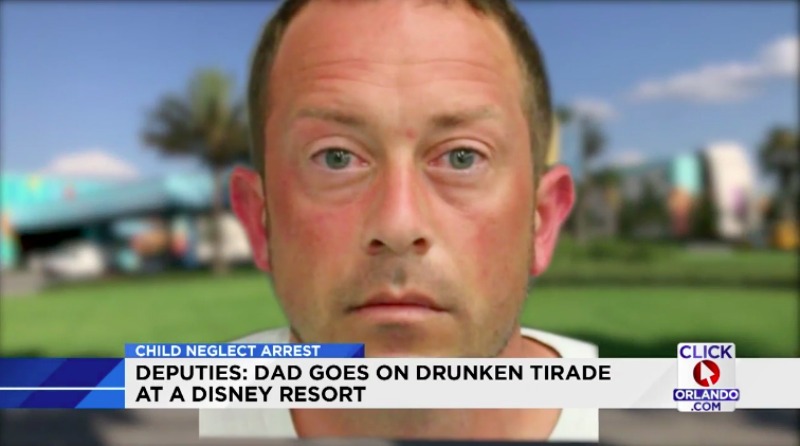 UPDATE 5/18/17: WKMG has reported that Olmstead’s wife, Destiny, told WKYC-TV that “their son’s redness was caused by eczema and he only suffered a small, mild burn. She also said her husband disputes accusations that he charged at people with a stroller and used racial slurs. He did become angry with a couple who accused him of being an unfit father, she said.”

Thirty-five-year-old Brian Keith Olmstead, of Brunswick, Ohio, was arrested at Disney’s Art of Animation Resort Monday night and remains in jail on a $2,200 bond.

News 6 reports that there were at least 11 complaints to resort management about Olmstead over the course of four hours. Guests stated that he had obviously had too much to drink, was using racial slurs, and was pushing his child’s stroller through the crowds at the resort. The authorities were called in to handle the situation after “Olmstead was escorted back to his room, only to return to the food court area, where several people complained he was threatening them with violence.”

Olmstead’s wife told the Orange County sheriff’s investigators that they began their day at ESPN’s Wide World of Sports for a cheerleading competition. She stated that he left with their son at around 3:30 p.m. and returned to the resort to allow the child to nap.

Witnesses reportedly told deputies that “Olmstead sat at the poolside bar with his child in the stroller next to him and drank himself into ‘a state of intoxication.'”

When deputies arrived, they said they “found Olmstead’s son had been sitting in a dirty diaper for hours, and his legs and feet were badly sunburned.”

The deputies removed Olmstead from Walt Disney World property and put him inside an Orange County Sheriff’s Office patrol car. One deputy stated that Olmstead “called him names repeatedly on his way to jail, and he told the deputy Donald Trump was going to kill him.”

“News 6 found out this wasn’t Olmstead’s first brush with law enforcement. According to court records, Olmstead has been arrested for DUI, resisting arrest, and disorderly conduct in Ohio. Reedy Creek paramedics told deputies his son suffered first-degree burns, which they believe will turn into second-degree burns because they were turning purple.”