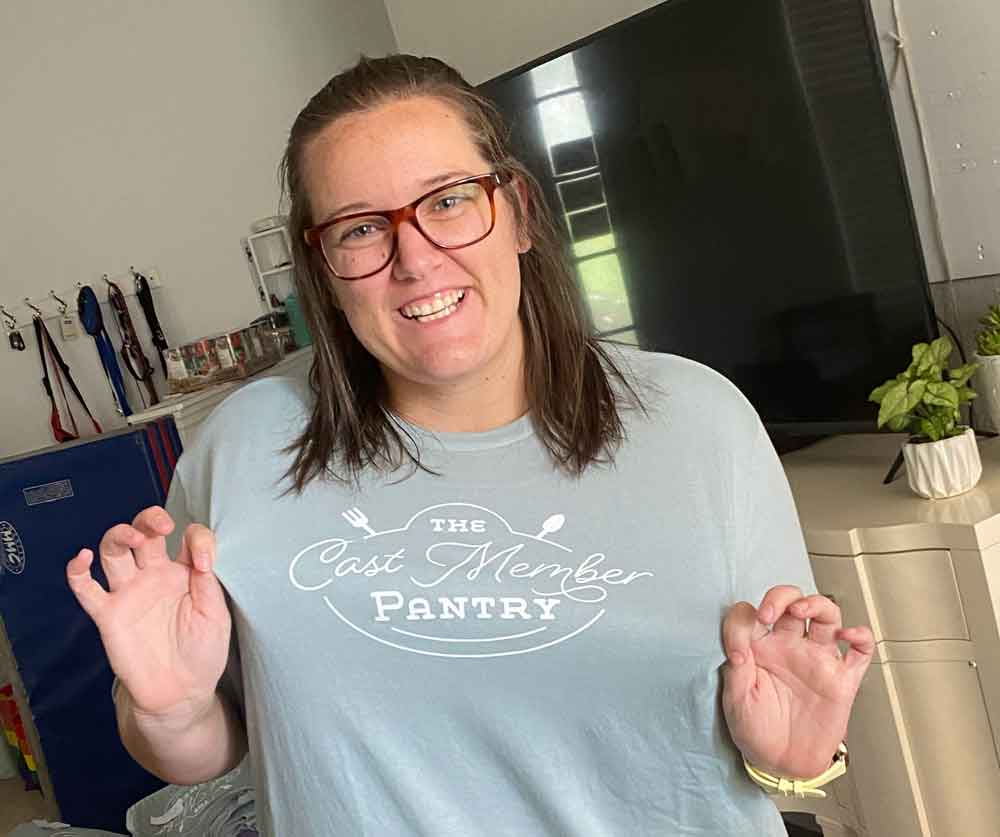 There’s a saying that I love – not all heroes wear capes – and today, we’re shining our spotlight on a hero in the Walt Disney World community.

It all started back when the Disney College Program was shut down due to COVID-19. Emily was assisting folks with packing up their things as they prepared to head back home when she realized that many of them had so many groceries that they could not take with them. Sadly, this happened to be taking place around the same time that people were stocking up on groceries in the earlier stages of the COVID-19 pandemic.

Emily knew right away that she had to make something good happen with all of the food that was being left behind. She wanted to help her fellow cast members who were being furloughed at the same time. So, she started the endeavor on her own, having no idea of how everything would all fall into place. She began collecting the extra stockpile of groceries in her own home and as it grew, she quickly started reaching out to local storage facilities to see if she could afford the monthly rent payment until one generous company learned of what she was doing and offered her the first two months rent-free. “It’s crazy how things come together when you’re doing a good thing,” she said.

Thus, The Cast Member Pantry officially opened on March 6, 2020, before the furloughs actually began taking place. She started out by setting up appointments with cast members who then came to the storage unit and did their own shopping from the available items. Emily says that once the furloughs started rolling out, the need [for appointments] tripled. She said at one time, they had 1,500 people on their waiting list just to set up an appointment with them. As of the date of this post, Emily was thrilled to share that The Cast Member Pantry has been able to fulfill over 7,000 appointments!

I have the most amazing team now that supports this crazy endeavor who are devoted to our mission of feeding our fellow cast members, Emily said.

The more popular grocery items such as pasta and sauce, cereal, grab & go snacks, canned tuna, canned chicken, canned vegetables, canned beans, and soups were flying off the shelves quickly as they started to see a huge increase in their waitlist. With their top priority being getting more cast members and their families fed, they knew they had to change things up a bit to keep up with the high demand, so they created their own “Fast Pass System.”

Emily’s team now puts together “Fast Pass” bags of groceries each week for cast members to come to pick up at their scheduled appointment times. Each bag has a set number of items in it including approximately $40-$50 worth of non-perishable food and should feed a family of four for 4-5 days. Cast members can come and get groceries every 30 days as long as they are still furloughed.

The Cast Member Pantry has accepted single donations from people as well as local businesses who have graciously helped them out. Emily says, “Sweetwater CarWash in Windermere gave us 100% of their proceeds for a Saturday. That fundraiser alone raised $6,200!”

Emily says they spend an average of about $4-5k a week on groceries during their busier weeks and that every contribution has truly made a difference.

For locals who are interested in lending a helping hand, volunteer shifts are available every week Wednesday through Friday; the days where bags are being packed. Bags are handed out on Saturdays to those with appointments. The way it works is the cars drive up, they pop their trunk and the bag is placed inside. Then they are good to go – all contact-free.

I’m happy it’s grown into what it is and still kinda shocked!! I love being able to do this though. It’s a win for everyone involved.

When I asked Emily what their biggest need is right now, she said, “our biggest needs tend to be our canned items (such as tuna, chicken, veggies, beans, and soups). But this changes every two weeks or so!” She also says that donations via Venmo are most helpful as it enables their shopping team to purchase the items that are most needed for any given week.

If you’d like to donate to The Cast Member Pantry via Venmo, their account for monetary gifting is @castmemberpantry.

They also have an Amazon Wish List with their most-needed groceries on it which, according to Emily, is the quickest way to get food to them.

The Cast Member Pantry is currently open to all furloughed cast members. All you need to do is send an email to [email protected] and you will receive an auto-reply email [with info in Spanish too!!] with a link that will take you to a site to register. Once you’re registered, an appointment time will be generated for you to go pick up your bag.

You can also join their Facebook group to interact with them and to stay up-to-date on any changes and updates.