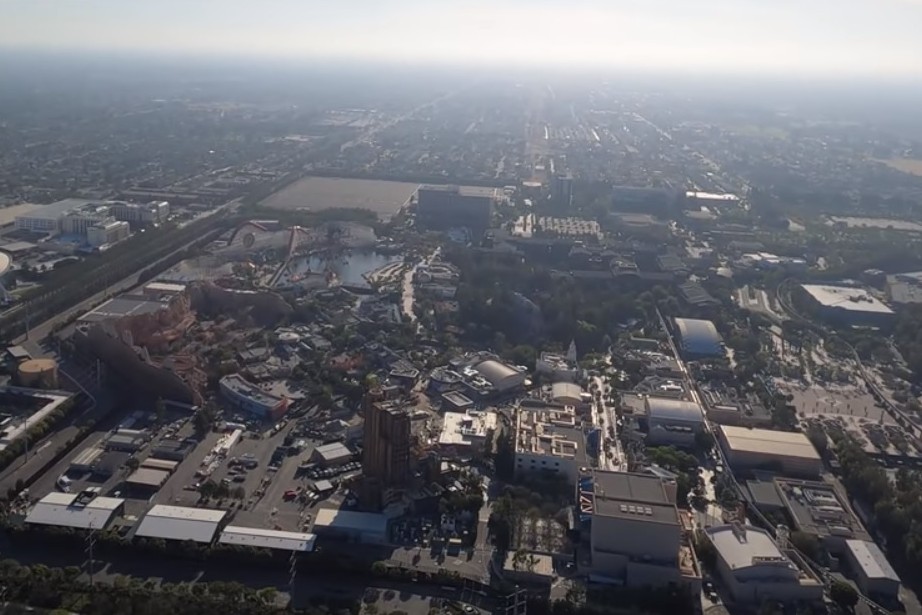 Recently, helicopter pilot Micah Muzio, who last month did a flyover of Disneyland Park, got a chance to fly over a closed Disney California Adventure and the hotels of the Disneyland Resort.

Muzio started with a pass over the Honda Center, which plays home to the Anaheim Ducks, then headed west over California Adventure (starting at about 4:00 on the video).

In the center of the screenshot above, you can see the unfinished Avengers Campus. The new land was set to open July 18th, but will likely miss it’s target. At the bottom is Guardians of the Galaxy – Mission: BREAKOUT! and on the left is Cars Land.

Next up [above] is a pass over Pixar Pier on the left and Grizzly River Run on the right.

Above is a beautiful overhead view of Disney’s Grand Californian Hotel, with a peek of the not-as-beautiful Goofy’s Sky School on the left.

One of my favorite shots [above] is next as Muzio flies over the Paradise Pier Hotel on the left and the west end of Downtown Disney on the right, where you can almost make out the baseball field painted on top of the former ESPN Zone building.

Here’s the complete video for your enjoyment:

Share your thoughts about Muzio’s flight on the thread Helicopter Flyer of Disney’s California Adventure over at DISboards.com.