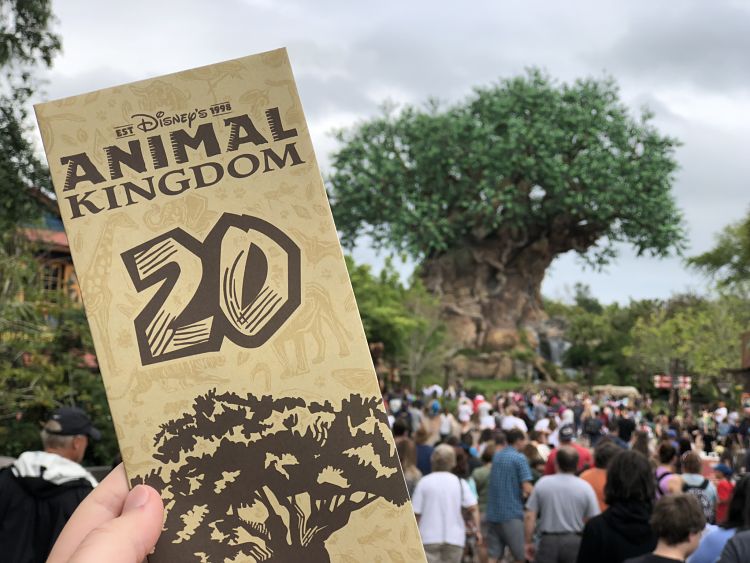 On April 22, 1998, Disney’s Animal Kingdom opened on Earth Day! It has been twenty years to the day since the park’s opening, and to commemorate the park’s growth and success Disney threw a massive celebration! With so much excitement surrounding the parks 20th anniversary, the park was extremely crowded. To kick off the festivities there was a welcoming celebration! Unfortunately, due to weather concerns, the presentation was moved from in front of the Tree of Life to the Festival of the Lion King theater. Sadly because the theater had limited seating, not all the guests wanting to see the special presentation made it inside.

The show started with the Tam Tam Drummers pumping up the crowd with lively music and dancing. After that, several Disney characters including Mickey, Minnie, Goofy, Pluto, Donald, Daisy, and more entered the theater, which prompted cheers from the crowd. Soon after, vice president of Disney’s Animal Kingdom Djuan Rivers walked up on stage. Rivers proudly announced that the Disney Conservation Fund has raised more than $70 million for ‘Reverse the Decline, Increase the Time’, which through scientific research and work with local communities is trying to protect the decline of 10 threatened species. Djuan Rivers was followed by senior vice president of Walt Disney World Parks Maribeth Bisienere, who praised the hard-working cast members and Imagineers who make Disney’s Animal Kingdom what it is. Finally, the celebration was concluded with the legendary Imagineer Joe Rohde who talked about the growth the park has made since 1998. Rohde also stated that the parks magic comes from the beauty of the creatures that inhabit it. The 20th Anniversary merchandise has been previously available for a couple weeks, but today there was limited edition “Day-Of” merchandise. The lines for this special merchandise was out of control! Waits for the special shirts stretched from the Discovery Trading Post Company back into Dinoland U.S.A. There was also special Joe Rohde print that sold out within the first 30 or 40 minutes of the park’s opening. The special merchandise included men’s and women’s t-shirts, a tank-top, a tote bag, a hat, and of course a couple limited release pins. There were also special Alex and Ani bracelets to celebrate the parks anniversary! There was also special Party for the Planet and Tree of Life cupcakes for $5.99. The cupcakes were found throughout the park at Flame Tree Barbecue, Pizzafari, Creature Comforts and Restaurantosaurus. UP! A Great Bird Adventure

Timed up perfectly with the parks 20th anniversary was the opening day of the reimagined UP! A Great Bird Adventure, which was formerly the Flights of Wonder show. UP! A Great Bird Adventure featured Wilderness Explorer Russell and his canine companion Dug as they discovered species of birds from around the world in their newest adventure at the Caravan Theater. There were some opening show hiccups like microphone issues and the birds not responding to certain cues, but overall it was cute. Really anything would have been an improvement from Flights of Wonder show, and integrating the Up characters helped move the show along.

Running through mid-May guests, ages 4 and up, can travel backstage at Rafiki’s Planet Watch for free to get an up-close look at two of the four following locations: Veterinary Hospital, Animal Nutrition Center, Science Center, or the Invertebrate Building Stops. Groups will be limited to about 14 people. Due to the tours being located backstage pictures and videos were prohibited.