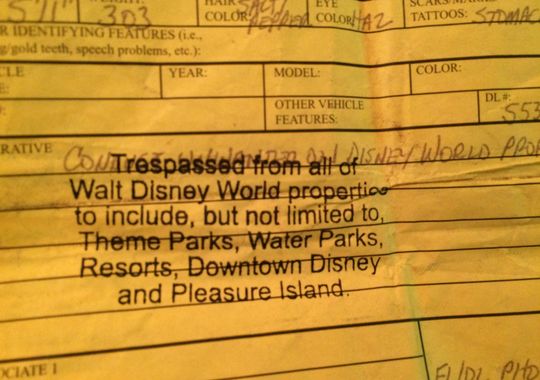 Walt Disney World has banned a Florida man from their theme parks for what he says was just a bad joke. David Swindler, of St. Augustine, said he and his family were staying at Pop Century over the Labor Day holiday. He was hoping to extend their two-night stay and said when trying to do so, he got impatient with the cast member, joking that “he could build a meth lab in his room by the time he could finally get some service.”

Disney security and Orange County Sheriff’s deputies later arrived at his room to investigate. Nothing was found, but he was still evicted from the resort and was issued a trespass warning, banning him from stepping foot on Disney property indefinitely. His wife and kids were not included in the trespass warning.

Swindler said, “I accept responsibility for saying that, don’t know where it came from. Don’t know why I said meth lab, I should have said, ‘I was going to build an atomic bomb,’ or something else. I didn’t think anyone would take me seriously. It was a figure of speech. I wish I could take it back.”

He continued, “This has not taken away my love for Disney. I will not let them take that away.”

Swindler can file an appeal with Disney security that will be reviewed.