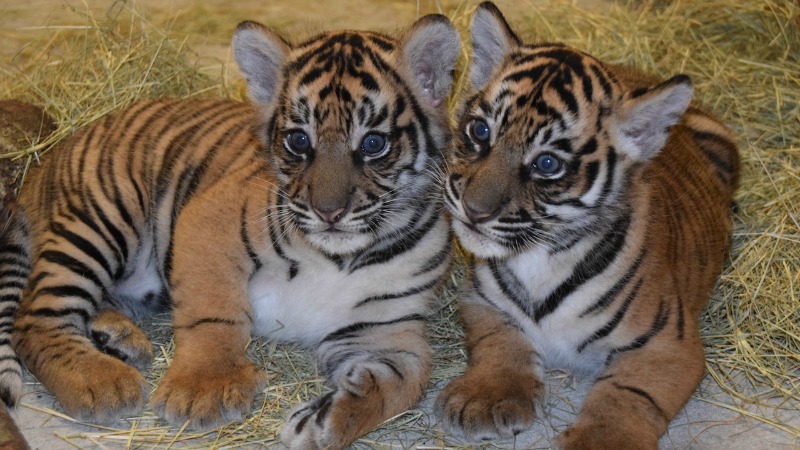 The two Sumatran tiger cubs that were born back in August at Disney’s Animal Kingdom now have names! The Disney Parks Blog has shared that Jeda (above left) is the male cub’s name and Anala is the name of the female cub.

The cubs are said to be bonding well with their mother, Sohni, and that they’re very busy showing their personalities which in turn inspired their names. Jeda, like his father Malosi, is the laid-back one, so it’s fitting that his name actually means “pause” in Malay. If you look closely, you may notice that “Jeda has two parallel lines inside a stripe on his head that resemble a pause button.”

Anala is the independent-spirited cub she’s quick to explore everything. Her name, appropriately enough, means “fiery, sizzling” in Hindi.

“The cubs wrestle with each other constantly and love jumping on plants and logs,” said Erin Heavey, an animal care specialist who cares for the tigers. “Jeda, in particular, loves ripping the bark off the logs and playing with all the pieces that come off. Anala is becoming more adept at sneaking and pouncing and loves hiding behind things (even when she isn’t entirely hidden) and trying to surprise attack Sohni or her brother. This is actually something she gets from Sohni, who loves to ‘hide and sneak’ even though she isn’t always very covert about it.”

More information about when Jeda and Anala will be viewable by guests in their habitat on Maharajah Jungle Trek is not available yet, but we’ll let you know as soon as we hear anything.

Take a look at the video below to see how Disney supports the Wildlife Conservation Society with helping the critically endangered Sumatran Tigers.