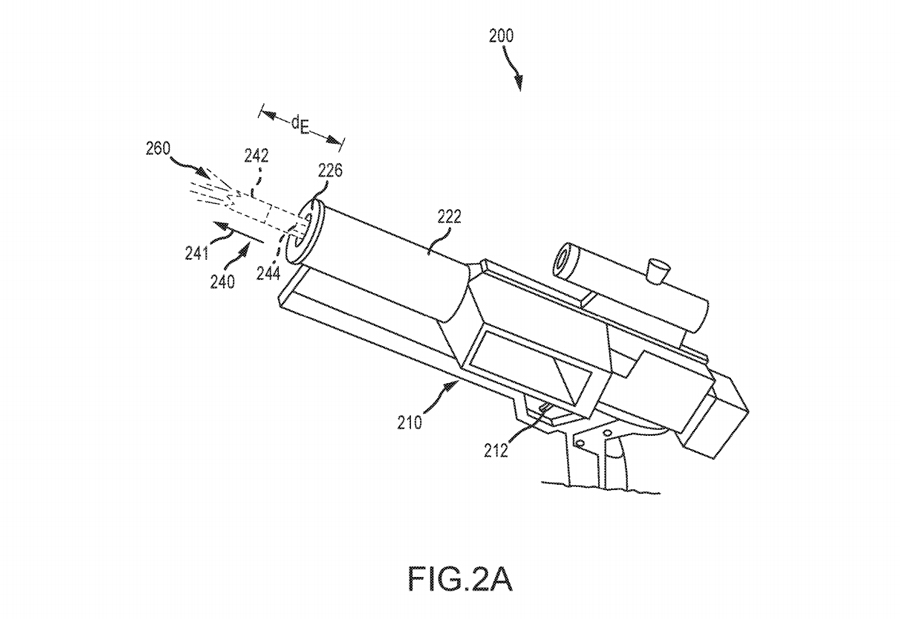 A certain amount of speculation can be involved when determining the in-park applications of new technology from Disney Enterprises Inc., but two patent applications published today are very clear-cut in their use. Disney is seeking patents for new daytime show systems that involve set changes and effects as well as muzzle flashes for battle simulations; both deal with the ever-present problem of creating entertaining and believable visual effects in areas where intense sunlight is present.

Disney has shown both an increased creativity and increased reliance on projection technology for many of their in-park shows and performances. These projections tend to work optimally in low-lit or dark environments, and are far less useful for daytime presentations. The first application is titled “Display System for Transforming Sunlit Surfaces,” and it aims to add a daytime replacement to projections that will allow quick adjustments to sets, including scene changes and special effects. The patent first defines the problems with projections,

A major problem with projection in outdoor environments is that the projector has to combat and overcome the brightness of the Sun. In other cases, projection-based solutions to surface transformation are problematic because viewers (e.g., park visitors or guests) are allowed to be in contact or in close proximity with the surface that is to be transformed, and this nearby positioning of the viewers of the display often will result in the viewers shadowing or blocking the projected light such that the transformation effect is diminished or even ruined.

Disney has proposed a system in which a liquid crystal (or LC) film or pane may instantly alternate between transparent and opaque as electrical current is run through it. Behind this film would be a background image, and in front of it would be a foreground image created with transparent ink to display a desired texture.

An example of how this would operate could be: During a battle staged between the Rebel Alliance and the Empire, a Stormtrooper might fire his blaster at one of our heroes. The blaster misses its mark and evidence of its lethal nature is made on the wall behind him. Before the blast, the front image shows the texture of a pristine wall due to the front image and an opaque middle element. Once the shot has been fired, the middle element turns transparent and viewers can now see the background image of a blaster-scar in the wall.

As the patent describes,

In this second operating state, the surface of the wall or structure provided by the display element is magically transformed (right in front of a viewer’s eyes) to have a new texture or finish provided by the imagery printed upon or provided by the first image element (e.g., to have its normal texture or surface scarred by a laser blast, to show painting or writing by a character, to change colors, and so on).

Briefly, a special effects device (or theatrical prop or theatrical prop lighting assembly) is provided that includes a flash delivery assembly supported within or on a housing (or carrier). Specifically, the flash delivery assembly includes a barrel housing a flash or light element and a light positioning assembly or device that, in response to a trigger (e.g., a control signal from an on/off switch or triggering element), acts quickly (e.g., a number of milliseconds or a fraction of a second) to move the flash/light element from a retracted position within an interior space of the barrel to a position outside the barrel (e.g., an exposed position outside the muzzle of the barrel)…Operation of the special effects device or theatrical prop provides a light-based effect that provides the illusion that a physical thing or object is ejected or shot of the end of the barrel’s muzzle and that a real explosion has occurred. The special effects device or theatrical prop can be controlled or triggered by the operator to “fire” or be shot off repeatedly without maintenance or “reloading” as may be required for a pyrotechnic-type device and without any possible danger as would be the case with pyrotechnics. Basically, a lighting element would rest inside the barrel of a prop gun. Once the trigger has been pulled, the element turns on and extends slightly out of the barrel, within milliseconds retracting back inside and turning off — simulating gun or laser fire.

As far as in-park application is concerned, an obvious choice for implementation would be in Star Wars-themed shows or events, most likely the new Star Wars: Galaxy’s Edge lands approaching completion in Disneyland Park and Disney’s Hollywood Studios. The likelihood of Disney adding realistic modern day firearms to park entertainment seems minimal, and it could be debated whether that would be inappropriate for The Walt Disney Company’s business model, but antiquated firearms like those use by characters from Pirates of the Caribbean and its associated franchise films is not beyond consideration.

As always, an application for a patent doesn’t confirm its approval, and an existing patent doesn’t guarantee its use. What we can gain from these multiple patent applications is that Disney is obviously looking for ways to step up their daytime shows and performances.