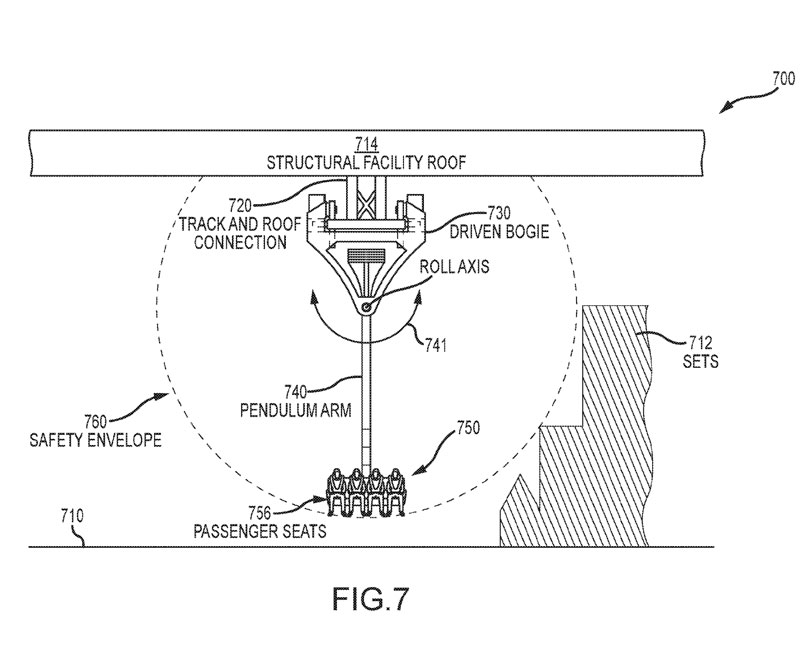 A patent filed yesterday by Disney could pave the way for future park attractions, with the most likely appearing to be a Spider-Man themed web-slinging ride. The patent, titled Track-based Swing Ride with Long Arm Pendulum, involves guests on a bench affixed to the bottom of a swinging pendulum; the pendulum is attached to a track that would move guests from one setting to another. Here is the patent’s description of the ride’s operation:

“One goal in designing the ride system was to deliver an experience similar to what it would feel like to be with Tarzan or a similar character swinging between trees of a jungle on a vine or with Spider-Man or a similar character swinging on webs between buildings as you move down streets of a city. [The ride is] intended to have swinging sensation provided while also having forward travel along a ride path in a direction of travel and for the swinging sensation to feel thrilling and fun.”

The arm of the ride could be timed with movements on the track to mimic natural motions, such as slowing or stopping at the top of a roll or building speed and momentum towards the bottom.

While the patent gives both Tarzan and Spider-Man as examples, it is possible that neither will be featured in the actual attraction this technology will play a role in, assuming it is used at all. Given the D23 Expo‘s announcement of a new Marvel-themed land to be constructed in Disney California Adventure, though, and the current popularity of Spider-Man, it seems as if the wall-crawler is the most likely subject for this type of attraction.

Although the patent’s description of the tech seems uniquely suited to Spider-Man, it doesn’t have to be restricted to just one ride. If successfully implemented, we could see this type of ride have a strong presence in future park development.