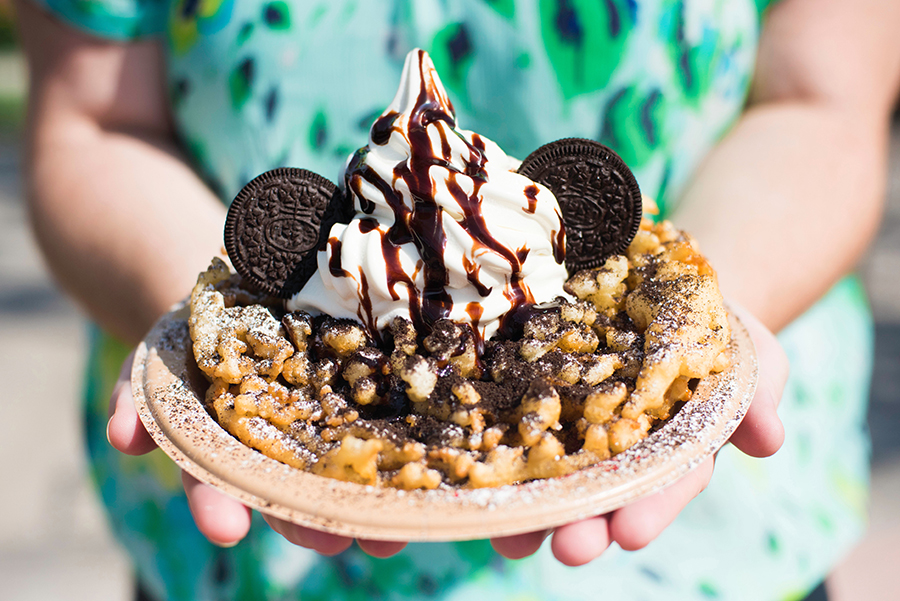 The Food & Beverage Team at Walt Disney World is continuously changing up their menus and adding new sweet and savory items. Today, we’re sharing a whole slew of new items that guests can find at the various eateries inside Disney’s Hollywood Studios.

First, the new Cookies and Cream Funnel Cake at Oasis Canteen is big enough to be a meal on its own. This treat is a classic funnel cake that’s topped with powdered sugar, crushed cookies and cream pieces, chocolate sauce, and your choice of vanilla or chocolate soft-serve. Also, there is a S’mores Brownie at Dockside Diner that has fudge, graham cracker crumbs, and marshmallows. There are quite a few new menu items at the Sci-Fi Dine-In Theater Restaurant such as the Sci-Fi Appetizer Sampler that comes with boneless buffalo tenders, shrimp and crab fondue, house-made tortilla chips, and fried dill pickles and served with blue cheese and horseradish. If Shrimp and Crab Fondue is your thing, you can now get it as a full-sized appetizer. The dish is a blend of shrimp, crab, and cheeses with roasted red peppers, fresh dill, and corn tortilla chips. Another new appetizer is the Sci-Fi Wedge Salad with crispy iceberg wedge, grape tomato, bacon, red onions, blue cheese crumbles, radish, balsamic glaze, and blue cheese dressing. Over at ABC Commissary, there are lots of new dinner entrées to choose from. Some of the new items include the Shrimp Teriyaki Bowl with stir-fried Napa cabbage, snap peas, red peppers, carrots, onions, edamame, shitake mushrooms, and broccoli tossed in a house-made teriyaki sauce over brown rice. Available for both lunch and dinner, guest will find a couple of healthier options as well. The Mediterranean Salad comes with grilled chicken breast on a bed of fresh mixed greens with cherry tomatoes, red onions, pepperoncini, kalamata olives, and feta cheese tossed in a Mediterranean vinaigrette and served with hummus and flatbread. The Vegan Burger is topped with lettuce, tomato, sautéed peppers and onions in a balsamic glaze, vegan mayonnaise ketchup, and sriracha mustard and served on a brioche bun with french fries. New desserts include a Chocolate Banana Cream Almond Crisp as well as the Toy Story Land Cupcake (which can also be found at The Trolley Car Café). Celebrating the grand opening of Toy Story Land this summer, this chocolate cupcake is topped with vanilla buttercream and a white chocolate piece.