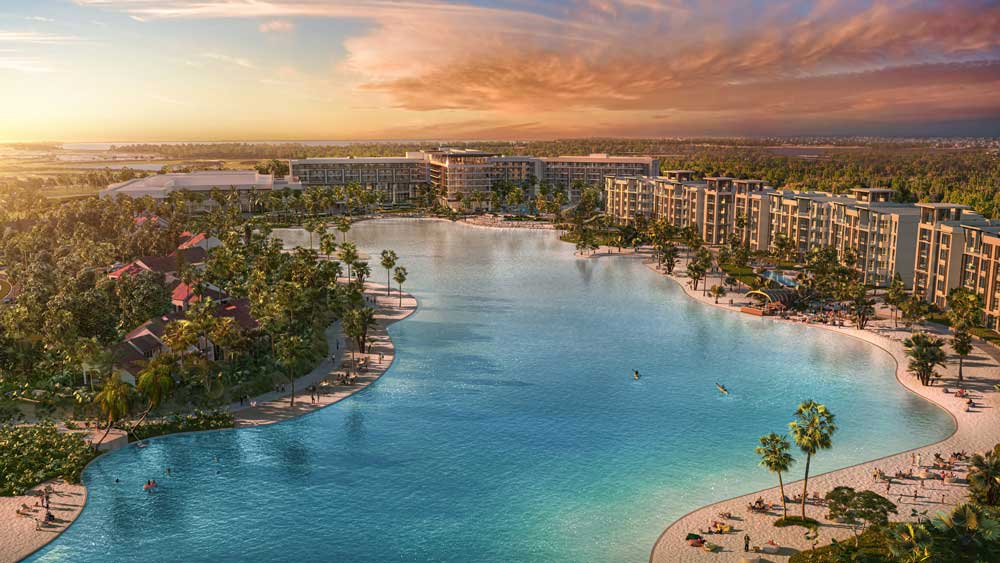 Named Evermore Orlando Resort, the first phase will open in 2023 and will offer a new approach to vacationing according to the developer Dart Interests Florida.

Evermore Orlando will feature a large-scale community of homes solely built for the purpose of vacation renting and operate with hotel-quality standards. The resort will offer flats and homes ranging from 2 to 11 bedrooms and will also debut Orlando’s first Conrad Hotel, Hilton’s luxury brand.

Evermore’s first phase will open with nearly 1,500 bedrooms spread among an array of stay experiences, from single homes to villas, flats, and hotel guestrooms.

The plans include 69 houses ranging in size from five to eleven bedrooms. Beyond vacation homes, the resort complex will also offer 76 four-bedroom flats, 41 two and four-bedroom villas, and a luxury Conrad hotel which will offer a sophisticated design, best-in-class amenities, and intuitive service to provide an exceptional travel experience in Orlando.

Conrad Orlando at Evermore will debut with 433 rooms, including 51 impeccably designed suites and 10 spacious family suites offering oversized accommodations that deliver all the comforts of home. Other features include 40,000 sq. ft. of indoor meeting space, a tranquil spa and numerous dining options including a signature rooftop experience.

“We are incredibly excited to expand on our strong presence in the Orlando market and introduce the Conrad brand to a new city,” said Danny Hughes, Executive Vice President and President, Americas, Hilton. “Conrad Orlando at Evermore will undoubtedly be a sought-after destination for Orlando travelers and will provide guests with outstanding service and impactful experiences when they visit the city.”

Bordering Walt Disney World just minutes from Magic Kingdom and Disney Springs, the project is a redevelopment of the Villas at Grand Cypress, and will offer a convenient option for groups looking to enjoy Orlando theme parks.