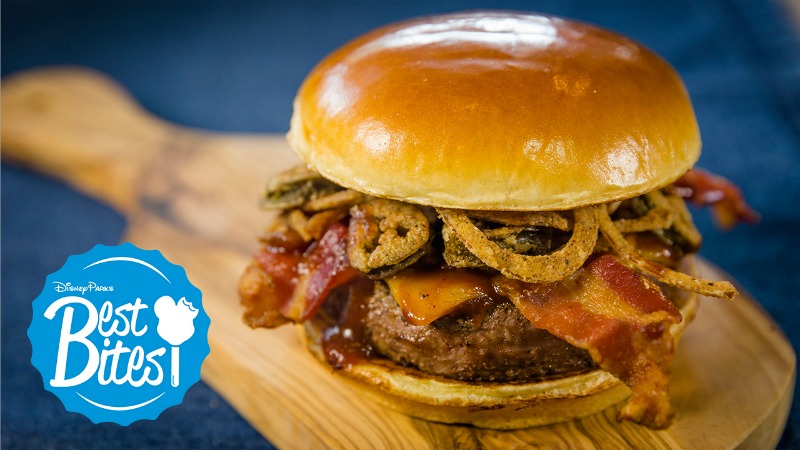 At the Sci-Fi Dine-In Theater Restaurant at Disney’s Hollywood Studios, new menu items including new burgers starring a signature blend of beef have made their debut. The “Drive-In BBQ Burger” has house-made barbecue sauce, bacon, cheddar, crispy, fried jalapeño, and onion straws on a brioche bun. The new “Falafel Burger” with a crispy chickpea falafel patty, arugula, tomato, Tzatziki sauce, and red pepper aioli on a brioche bun will surely tantalize the taste buds of the vegetarians in your family. After it disappeared from the menu about a year ago, guests will be thrilled to hear that the “Surf and Turf” has returned to the menu at Narcoossee’s at Disney’s Grand Floridian Resort & Spa! This popular dinner includes a six-ounce lobster tail with a six-ounce sirloin served with Yukon gold rustic mashed potatoes and roasted spring vegetables.

Pizza lovers will be happy to hear that “Frusta” has landed at Cool Ship in Magic Kingdom Park. “Pizza Frusta” is a pizza-like snack that’s great for guests on-the-go! You can choose from tomato and cheese or pepperoni and sausage.

The new open-faced BLT Sandwiches at The Smiling Crocodile at Disney’s Animal Kingdom count as one snack entitlement on the Disney Dining Plan. Guests can choose between turkey, salmon, or pimento cheese on toasted ciabatta with lettuce, tomato, and thick-cut smoked, house-roasted bacon.