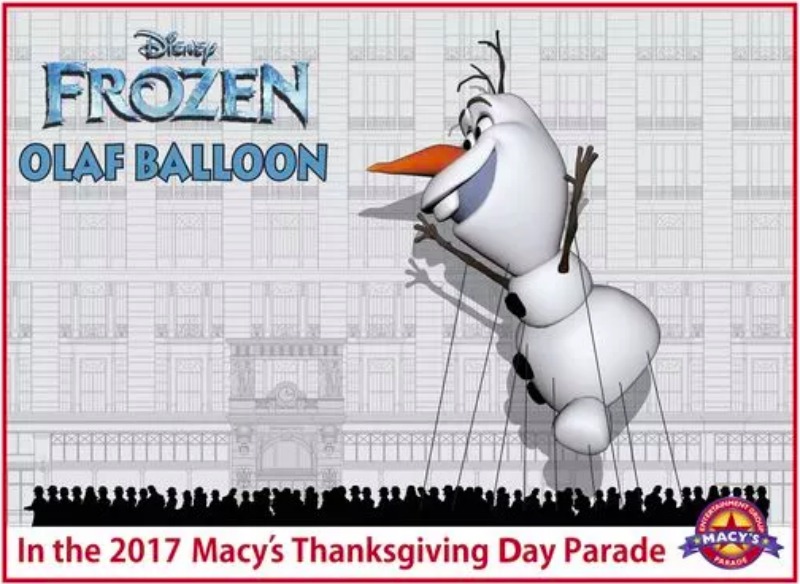 Olaf’s Frozen Adventure, the new short that’s set to air in theatres ahead of Disney Pixar’s Coco on November 22, 2017, will be continuing its kick-off of the holiday season with a giant Olaf balloon debuting in the 91st Annual Macy’s Thanksgiving Day Parade in New York City (broadcasting on NBC at 9 a.m. ET/PT)!

“Having an Olaf balloon alongside Mickey, Elmo and Big Bird is a dream come true and something that, because (the parade’s) so storied and has such a long tradition, I now get to share with my own kids,” says Josh Gad who voiced the beloved character.

According to USA Today, “Chris Buck, who directed the first Frozen movie in 2013, drew a sketch for the balloon that was used as inspiration for the Macy’s Parade Studio design team.” Gad is admittedly biased as Olaf has now reached the “rarified air of such pop-culture icons as Spider-Man and Spongebob Squarepants and says it’s ‘a very humbling honor’ and one that speaks to the way Frozen’s snowman has struck a chord with kids, which the actor sees on a daily basis. ‘Whether it’s his purity, innocence or naivete, there’s something they all can relate to or have some sort of entertaining response to,’ Gad says. ‘I absolutely treasure that.’”