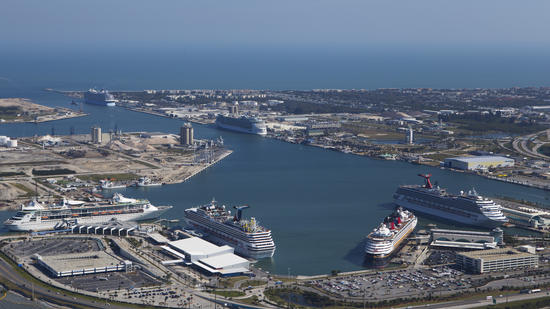 Royal Caribbean has announced that their ship, Oasis of the Seas, will be moving from Port Everglades to Port Canaveral in 2016. This will also cause some other changes to which Royal Caribbean ships are docked at the ports. Oasis and its sister ship, Allure of the Seas, have used the Fort Lauderdale port since their debut, in 2008 and 2009 respectively. The Oasis-class ships are the largest in the world; two more ships of this size will be built in the next few years. One of these new ships, the Harmony of the Seas, will replace the Oasis at Port Everglades.

Freedom of the Seas is currently at Port Canaveral, but will head to Port Everglades next summer and will continue its schedule of Eastern and Western Caribbean itineraries. Enchantment of the Seas will be replaced with the Rhapsody of the Seas, which will begin sailing on 3- and 4-night Bahamas itineraries.

Port CEO John E. Walsh, said, “We are thrilled that Oasis and Rhapsody will be deployed from Port Canaveral. We enjoy a fantastic relationship with Royal Caribbean and the announcement of these two wonderful ships shows commitment that our partnership will continue to grow.”

Port Everglades, Port Canaveral and Port Miami are the only three Eastern seaboard ports large enough to handle the Oasis-class ships. Walsh continued, “This definitely is the payoff to hard work, longtime partnership and providing excellent customer service and facilities that reflect Royal Caribbean’s commitment to innovation. This was anticipated when Royal Caribbean agreed to partner with Port Canaveral on the construction of new Cruise Terminal 1 that opened in December 2014. Cruise Terminal 1 was built to handle Oasis-class ships. The performance of Freedom of the Seas led to this increased capacity in Central Florida.”

Stewart Chiron, known as The Cruise Guy, says that it will be interesting to see how these changes affect the Disney Fantasy, also sailing out of Port Canaveral. “Disney Fantasy has been the premium price cruise ship in the market and there has been no competition up until now.” He thinks that having the Oasis-class ships in Central Florida will be a challenge because so many of the area’s cruisers are in the area to split time and money between Disney World and the Disney ships. “As nice as these (Royal Caribbean) ships are, it’s still not Disney. If they can’t get the premium prices, they will move it.”