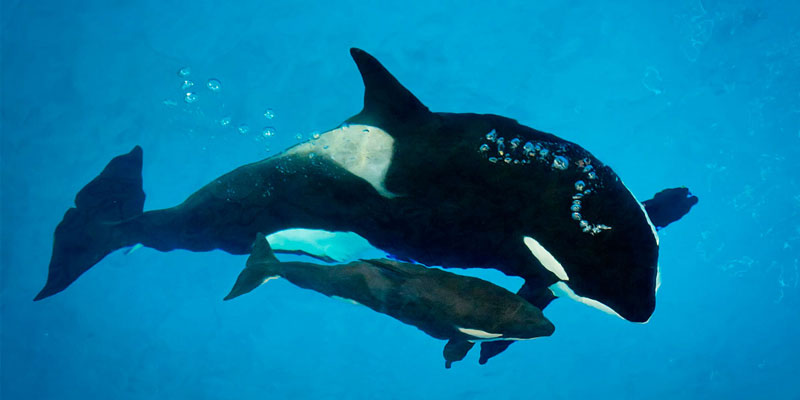 Kyara, a 3-month-old killer whale calf born into captivity at SeaWorld San Antonio, passed away on July 24th. The park had ended its orca breeding program in March of 2016, and Kyara was conceived before that announcement; she was the last calf born as a result of SeaWorld’s orca breeding.

SeaWorld released an announcement explaining the circumstances behind Kyara’s untimely passing. The park’s veterinary staff administered critical care to the calf over the last three days. As for the cause of death, SeaWorld wrote,

“Kyara had faced some very serious and progressive health issues over the last week that the animal care and veterinary teams had been aggressively treating. While the official cause of death will not be determined until the post-mortem exam is complete, we know that Kyara had an infection, likely pneumonia, and that her health continued to decline.”

As far as Kyara’s emergency veterinary care is concerned, the park said,

“Kyara was under 24-hr care and watch at the animal hospital at SeaWorld San Antonio. In addition to monitoring her 24/7, the expert veterinary staff was treating her with antimicrobials, including antibiotics, for any infections she was fighting. Additionally, the team was hand-feeding her in an effort to ensure she received the nutrition she needed.”

SeaWorld is now transferring their focus to the rest of the orca pod, including Kyara’s mother Takara. The staff claims that the other killer whales are behaving normally and show no signs of the deceased whale’s illness.

Since severe backlash following the release of the 2013 film Blackfish, which heavily criticized treatment of SeaWorld’s orca Tilikum, the company has not only cancelled its breeding program but also plans to phase out its killer whale performances by 2019. It has been nearly 40 years since SeaWorld has collected a wild orca, and most orcas currently in its care were born in captivity.

SeaWorld claims Kyara’s illness was not related to her captivity, stating,

“Kyara’s pneumonia has been identified as the most common cause of mortality and illness in whales in dolphins, both in the wild and in zoological facilities.”

After the death of Tilikum in January of this year, SeaWorld faced scrutiny for not making the controversial whale’s necropsy details public. The park’s statement addresses the question of whether Kyara’s necropsy will also be kept from the public by saying,

“Post mortem exams are detailed clinical investigations that include a good deal of laboratory testing. We will provide an update on SeaWorldCares.com as soon as the full results have come back.”

While it may be easy to think of the passing as yet another example of bad press for a company already under intense scrutiny, the calf’s death does have a personal affect on the trainers and veterinary staff who worked with her. SeaWorld quotes one of her trainers, July, who said of Kyara,

“Kyara had a tremendous impact on each of her care staff, not to mention all of the guests that had the chance to see her. From late nights to early morning, rain or shine, we dedicate our lives to these animals, and this loss will be felt throughout the entire SeaWorld family.”