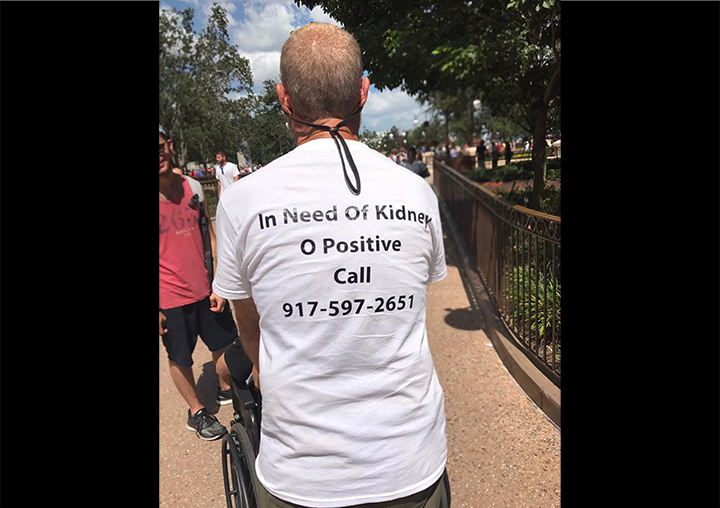 Robert Leibowitz, a New Jersey man in search of a new kidney, wore a shirt in the Magic Kingdom on August 22 that read, “In need of a kidney. O positive. Call 917-597-2651.” His plea touched the hearts of many guests, but it was the actions of fellow guest Rocio Sandoval who may have had the greatest impact of all.

She kindly asked Mr. Leibowitz if she could take a picture of his shirt and post it on social media. That was exactly the response that Robert Leibowitz was looking for. According to WFTV, he replied to Sandoval with a big hug saying, “Yes, please! Thank you. Please share this with the world.”

Since Sandoval posted the picture last Tuesday on Facebook it has been shared more than 64,000 times, and Robert Leibowitz is extremely happy with the response.

Leibowitz has had kidney problems since he was 12-years-old, and now he unfortunately must undergo dialysis three times a week for four hours a day, and will need a transplant as soon as possible.

Robert Leibowitz is fighting for his health, and as a 60-year-old single father he was willing to do everything he could for his family.

The magic of Walt Disney World and its community of guests has already helped this story gain a lot of traction; now he is hoping there is a little more magic left, and that a kidney can be found for him. Stories like these are crucial in reminding us that organ donors are extremely important to saving lives.

On the Donate Life America website you can join your state’s online registry for donation. Your driver’s license can also be a declaration of your intentions.