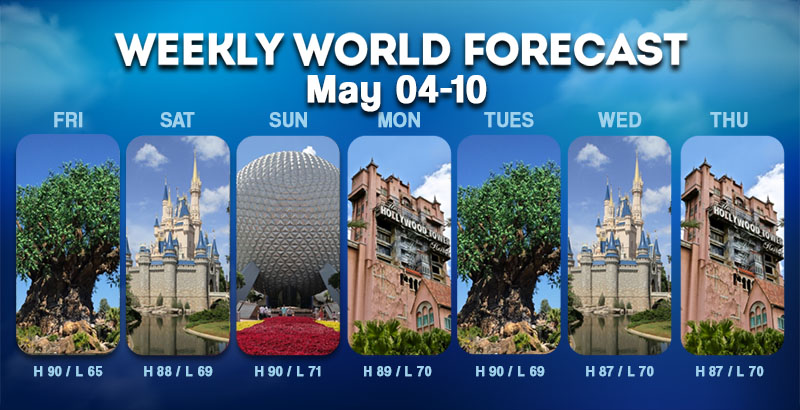 Friday May 4 – Today is a very big day at Hollywood Studios. In case you haven’t heard, there’s a play on words called “May the 4th be with you” (May the force be with you) and this day brings hoards of Star Wars fans to Hollywood Studios! I will not be here and unless you’re a big Star Wars fan, I’d suggest you don’t go here either. Also, Hollywood Studios will fill up in parking and Epcot is the overflow parking lot that Hollywood Studios uses. So I would also avoid Epcot for that reason. So, I will say go to Animal Kingdom today because most of the people coming in just for May the 4th weekend, will probably try to hit up Pandora: the World of Avatar on Saturday, before going home on Sunday.

Saturday May 5 – Now, you would think that because Hollywood Studios was so crowded yesterday that it would be my suggestion for today……but it’s not. The people who avoided Hollywood Studios yesterday will go today, so another big crowd will be there. I would recommend Magic Kingdom because it’s going to rain off and on. Kids get fussy and parents want to just get them out of the rain and take them back to the resort. Magic Kingdom does have enough indoor activities for the rain to not be a huge deal here.

Sunday May 6 – Sunday is a great day to do Epcot. It’s going to be 90 degrees but it will be really cloudy and a lower humidity than the other days. Epcot is so large and open that it makes for a really hot day when it’s too hot outside and no cloud cover, so Sunday seems ideal.

Monday May 7 – This is your best day to do Hollywood Studios! It doesn’t have early extra magic hours and with how busy the weekend would have been here, it should be calmer than usual on Monday. I checked and there are a lot of FastPass options still available for Monday.

Tuesday May 8 – Animal Kingdom is my pick for Tuesday and I have 1 main reason for this. The Festival of the Lion King (the best show at Disney World) will be closed for refurbishment on the 9th for “one day.” I do believe Disney with this, however, sometimes one day turns into 2 and 3 and then 4. So if you put off doing Animal Kingdom until the 10th and think ‘I’ll do it after Festival of the Lion King reopens,’ you might end up with it being closed an extra day.

Wednesday May 9 – For Wednesday, I would suggest Magic Kingdom. Its supposed to be storming the next two days, but Magic Kingdom statistically has lower crowd numbers on Wednesdays by comparison to other days of the week. So, those 2 factors together could make for shorter lines here.

Thursday May 10 – Thursday we’re heading back over to Hollywood Studios. Just like Wednesday, it is supposed to rain and storm all day on Thursday. You want to go somewhere that has indoor activities because of the rain obviously, but also because of ride closures that come with rain. Indoor rides aren’t affected by the weather, so play the odds and go to Hollywood Studios!