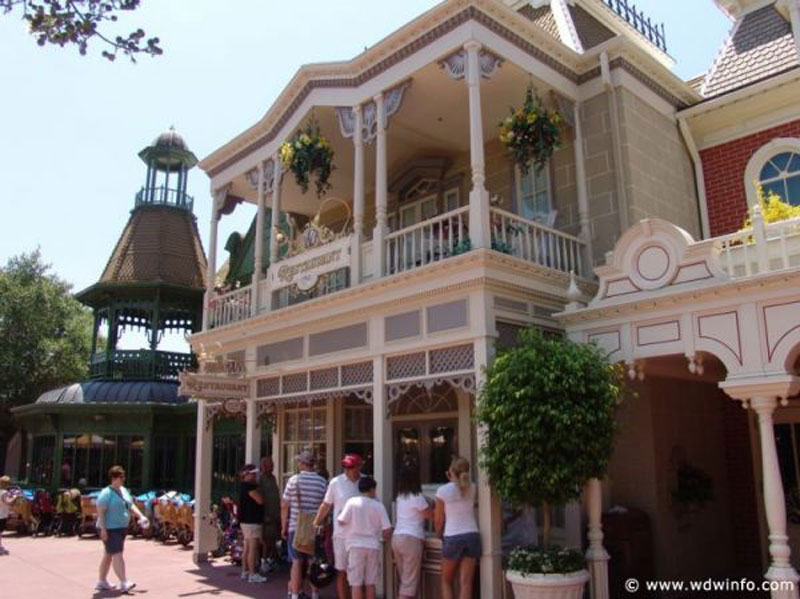 I’ve been to Magic Kingdom many times — more times than I can count — and yet, I’ve always passed over The Plaza Restaurant, which is tucked into a quiet corner on Main Street, U.S.A. Even after I had learned of its existence, it wasn’t until a few weeks ago, on an unusually busy night in February, that I ate there and had one of the most pleasant dining experiences in the Magic Kingdom.

Prior to eating at The Plaza, my favorite restaurant at Magic Kingdom was Skipper Canteen. I find most of the table service restaurants in Magic Kingdom lacking in quality, no matter how beautiful they are (I’m looking at you, Be Our Guest), so I usually opt for a quick service meal (Columbia Harbor House is my go-to). However, on February 3rd my party and I were looking for a nice, sit-down meal and stumbled upon The Plaza as we were herded up with the crowd to get a viewing spot for the Happily Ever After fireworks.

When I say this night was busy, I’m making an understatement. It was CRAZY busy. We got to the park more than an hour prior to the fireworks start time, and still had to stand all the way at the back of Main Street (off to the side, near the Tomorrowland Terrace restrooms) to see the show.

It was a terrible view, and the music could barely be heard from where we stood. Cast members kept yelling at guests to not block the walkway. I was disappointed, because this was not expected to be a busy weekend; no marathons or special events were occurring, and this less-than-magical experience caught me off-guard. However, we decided to console ourselves with some good food and saw that The Plaza was nearby. Could we get in for dinner with no reservations?

We checked in with the hostess before Happily Ever After, and she said the wait was about an hour. It was 7:00 pm, and the show started at 7:55 pm. We still wanted to try seeing the show and didn’t want to risk being called right before it began, so we decided to come by again once the fireworks ended (and avoid the mass of crowds headed for the exit). It seemed like a good plan.

Nevertheless, once we were in our fireworks viewing location, we gave it up as a bad job, and decided to head back to The Plaza right as the villain’s section of the show was starting. The music was the perfect backdrop to our mischievous weaving in and out of the crowds, trying to get to the entrance of The Plaza without the cast members re-routing us. Luckily, once we explained to the few that did try to stop us that we were merely trying to get to the restaurant, they let us through the walkways. We checked back in with the hostess and she gave us a pager, telling us it would be five minutes. This was perfect; it was just enough time to finish watching the fireworks from the front of the restaurant while we waited. Again, not the best view, but it was better than the human sandwich we were stuck in before.

Finally, after Tinkerbell flew and the last “boom” rang out, our pager went off and we were led blissfully into the immediate tranquility of the small restaurant. This was such a change of pace from the usual post-fireworks crowd that I immediately felt at ease. So, I don’t know if this advice will work for anyone else, but if you don’t mind missing the last half of Happily Ever After — and don’t have a reservation — try checking in to The Plaza Restaurant then!

The cast member who seated us was very nice. I told her I had never eaten there before, and she confessed that she had never even known The Plaza existed until she started work there. Once we were seated, we got our menus and drink orders right away. The service was incredible, especially for it being such a busy (and cold) night. The décor, in my opinion, had the classy feel of a very posh restaurant, but still felt casual and comfortable. Intricate wallpaper and bouquets covered the walls, with beautiful light fixtures and mirrors giving the small restaurant a sense that it was bigger than it was. It felt very Victorian, and fit in perfectly with the theming of Main Street U.S.A. Everything was bright, cheerful, and charming.

Our server was very kind and patient, and talked us though the menu, as it was the first time for all of us. I wish I had had the sense to jot down her name, but I had no idea I’d end up writing a dining review! She told us about the bottomless milkshakes The Plaza had, and they looked delicious, but since it was a cold night we opted for tea. I’ll definitely be back for those milkshakes in the summer, though!

I noticed from the menu that The Plaza was big on sandwiches, but since we were all a bit chilly, we were looking for something heartier. As a starter, we got The Plaza Loaded Fries, which are French fries topped with cheese, bacon, lettuce, tomatoes and ranch dressing. They lasted about five minutes before our party devoured them, and reminded me of the Figaro Fries that they used to serve at the Pinocchio Village Haus restaurant in Fantasyland. For the entrees, my sister and I both got the Home-Style Meatloaf, and my husband got the Baked Honey-Barbecued Brisket Mac & Cheese. Both were delicious, and came in decent-sized portions. The meatloaf came with garlic mashed potatoes, gravy, and corn. The only comment I have is that mine was a little dry, but I always could have asked for more gravy. My sister had no complaints.

I don’t usually eat anything together with mac & cheese, and thought the barbecue brisket was an odd combination. However, after helping myself to a few bites, I almost regretted not ordering this myself. The mac & cheese alone was great, topped with bread crumbs, fried onions, and scallions, but the barbecued beef brisket was so sweet and tender. They went great together, and again, the portion-size didn’t disappoint. At the end of the meal, we were all too full for desert, but I certainly have my eye on their signature chocolate cake for when I return. The food was on the pricier side, but the quality and the great service made up for it — this wasn’t Cosmic Ray’s after all (not that I don’t love Sonny Eclipse, but, you know). The Loaded Fries were $8.00, and both entrees were $21.00. The Plaza also takes Passholder discounts.

I’m so glad I have a new favorite place to eat at Magic Kingdom. It turned our sour fireworks experience into a brilliant evening meal, and I will absolutely return with a reservation next time. Although, it is good to know that they may have slots available while everyone else is viewing the fireworks; the restaurant itself, while on Main Street, does not offer a good view of Happily Ever After.

What does everyone else think of The Plaza, and does anyone have recommendations on what to order for next time?