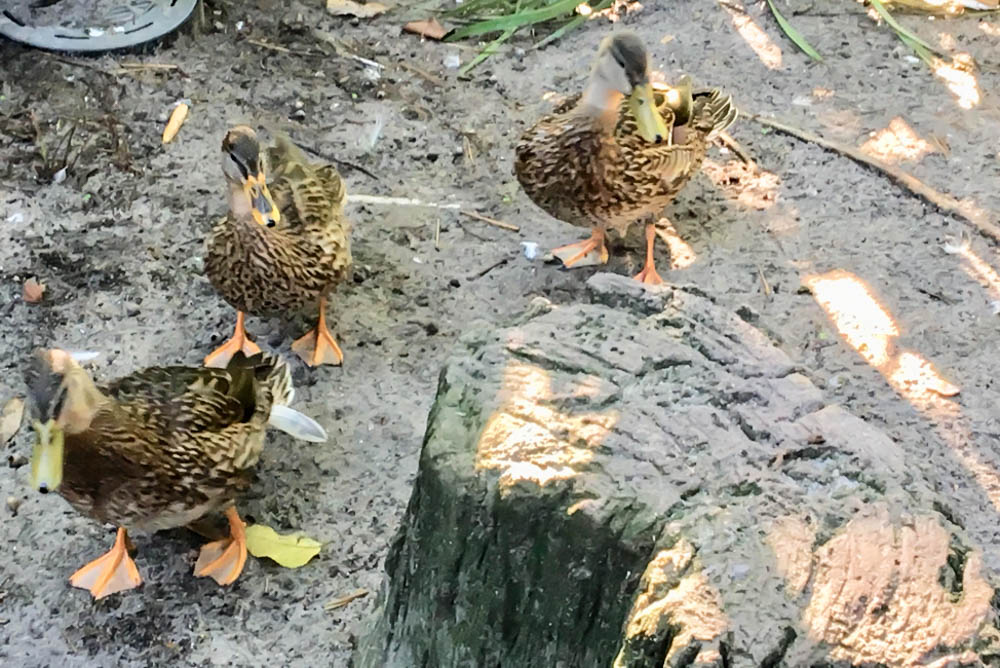 There are many things which make Walt Disney World a magical place, beloved by generations. Many are obvious, ranging from Cinderella Castle, to the monorail, and much, much more. But some touches occur either underfoot or are such an integral part of the Walt Disney World experience that they may get taken for granted. There are details which have been maintained for decades and make the parks and resorts all-encompassing and truly magical. Below are four, which are touches that make Disney a complete and beloved experience.

Ducks are seemingly everywhere in Walt Disney World, from the hub in Magic Kingdom to Kilimanjaro Safaris. They have gorgeous, shiny coats and often stunning colors. What is not to love?

They add life to all aspects of already verdant parks. From Liberty Square in the Magic Kingdom to Illuminations, their sweet, innocent quacks and a simple presence permeates Walt Disney World. The ducks add life to the parks, and in fact have evolved to become quite media savvy, having an Instagram account. The parks, which operate with the goal of being pristinely maintained, might run the risk of looking sterile or lifeless, but these, as well as other animals, ensure that the parks always have a sense of life and comfort.

Many members of all generations love the ducks, and lamentably some do not. They take full advantage of the water ways and foliage in the parks without making a scene and causing destruction. They are wonderful delightful animals, and hopefully their presence will not diminish over time.

Music is everywhere in Walt Disney World, from resorts, to attractions and modes of transport. From queues to the WDW Today channel, hearing it upon one’s return home has an immediate transformative effect, and one can feel themselves walking up Main Street U.S.A. or riding Spaceship Earth. Music has been updated as attractions have been reimagined, and new loops have been composed as new lands open, such as in Pandora: World of Avatar. The Minnie Van Service also includes music corresponding to every park and resort on property.

Park music is usually at a volume such that it is easily noticed without being obtrusive. It straddles the line between being a subtle touch and an integral part of the experience. Upon one’s return home, loops and soundtracks are easily available on Youtube.com. For a faster pace, the Soarin’ soundtrack might scratch your itch; the Splash Mountain soundtrack can provide a folksy feeling.

What are your favorite Disney Park loops?  What do you listen to when you are in desperate need of a park fix?

Mickey Mouse is probably the epitome of Disney, and Hidden Mickeys — outlines of Mickey’s head — permeate every aspect of Disney parks, from attractions to utilities, and much more. Guidebooks exist on where to find them throughout Walt Disney World and Disneyland, and Hidden Mickey Scavenger Hunts are a common activity for seasoned park visitors looking to try something different.

Venturing forth and finding Hidden Mickeys are a great way to really appreciate one’s surroundings and be able to really appreciate the remarkable details these parks contain. No official list has been compiled and due to the ever-shifting nature of the parks, this would probably not be possible. Also, some Hidden Mickeys may exist due to cast member intervention, such as stones in The Seas with Nemo & Friends, or the hoses used in Living with the Land. Some of course, are more obvious than others, but all are a reminder that Mickey is always ever present in the parks.

At the time of Disneyland’s conception, Walt Disney had in part (amongst countless other ideas) the intention of making a clean and wholesome place for families of all ages to enjoy together. Walt Disney felt that the parks should be clean enough on their own merits that there is an inherent shame in leaving trash around. He began the tradition which cast members and many guests continue, where if you see trash, you pick it up. We have all seen the corporate suits with their picker-uppers, and even during the busiest times of year, the parks overall remain pristine.

Above, I added the “hopefully” notation, as there have been unfortunate exceptions to the cleanliness of the parks. Guests have reported a decline in cleanliness during busier times of year and special events. From my experience, the parks and resorts are overall expertly maintained and if there is any kind of filth, it is due to negligent guests. An example of this would be throwing candy wrappers on the ground during Mickey’s Not-So-Scary Halloween Party.

Cleanliness of the parks is a crucial part of the experience as envisioned by Walt Disney himself. The parks provide an abundance of trash cans which are designed to fit the theming of their respective areas, while also being reasonably visible. At Walt Disney World (or really anywhere) there is no excuse whatsoever to simply throw trash on the ground. It’s slimy, grimy behavior which degrades the park experience for everyone else. 99% of guests are clean and respectful, and actively contribute to keeping the parks immaculate.

Many things have historically set Disney Parks apart from the competition and put them above the rest in terms of providing an all-encompassing experience — making the parks a living space by allowing nature to remain, providing music to provide a complete atmosphere, Hidden Mickeys to set forth and find, and maintaining a clean and wholesome environment. Guests certainly appreciate these touches, and hopefully will continue to do so.

There are many other little touches which make these parks beloved by millions.  What are some of your favorites?