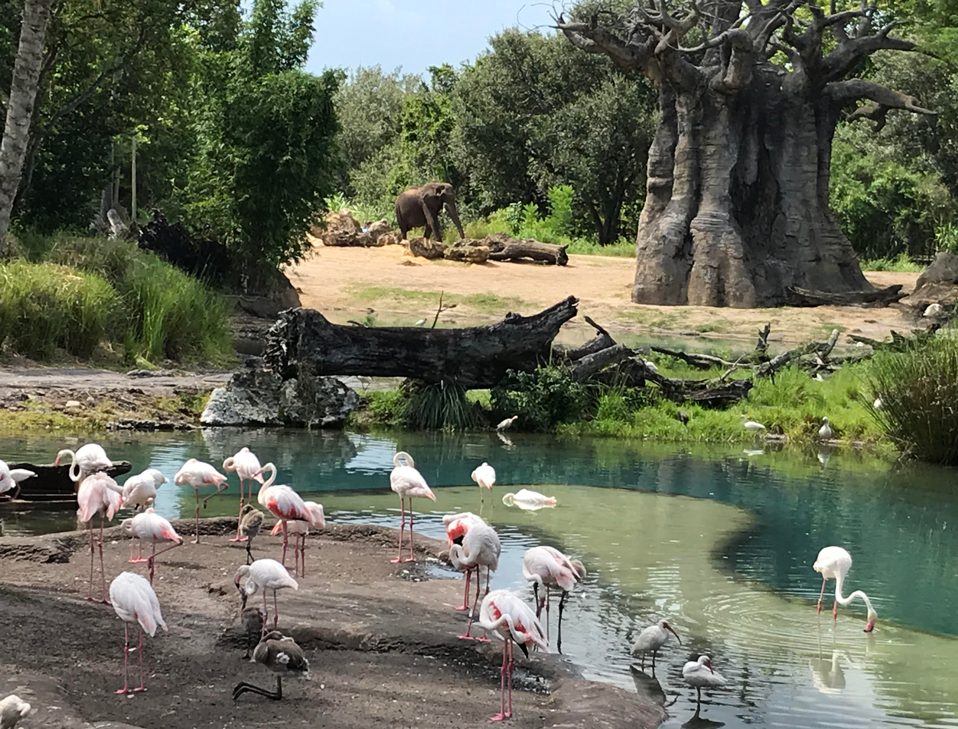 If you have followed along so far, we have been exploring the Harambe Wildlife Reserve on Kilimanjaro Safaris in Animal Kingdom’s Africa. Our journey through the reserve continues into elephant country and the mud pits.

As we exit the savanna, we first see African elephants on the right side and mandrills on the left.

Mandrills are the world’s largest monkeys that live in the Equatorial rainforests of Africa. Baring their enormous canines is a friendly gesture between monkeys, but they are also used for defense. A troop of mandrill can include up to 200 individuals. Adult male mandrill has huge noses and behinds, which attract mates and allow the group to see each other in dense rainforests. Females are about half the size of males and have duller colors. They use pouches in their mouths to transport food and save it for later. Due to deforestation and poaching, they are a venerable species. Mandrills at Animal Kingdom are bred responsibly as part of the Species Survival Plan (SSP). Participants in the Association of Zoos and Aquariums (AZA) SSP program oversee the breeding of endangered species ensuring the population is healthy and genetically diverse.

African elephants initially appear on the right side of the Safari vehicle. They are the largest land mammal weighing between 2.5 and 7 tons. Elephants are keystone species, meaning there are crucial to their ecosystem. They dig up dry riverbeds using their trunks, creating watering holes for other animals. Seeds in their dung spread plant life across the savanna and forest, creating a habitat for dung beetles. In forests and savannas, elephants knock over trees creating pathways and open spaces from which various animals benefit.

Elephants love water and are strong swimmers. Many sources strongly encourage riding Kilimanjaro Safaris early in the day to see as many active animals as possible. However, there are several benefits to riding the attraction in the afternoon. One of those benefits is to see elephants in their pools, splashing themselves with their trunk and looking quite happy!

On the Harambe Wildlife Reserve, guests have ample opportunity to see elephants in their 7-acre habitat (about half the size of Star Wars: Galaxy’s Edge). Mud pools, rocks, baobab trees, plants, and three deep pools provide a rich and winding habitat. Their backstage pen is visible on the train to Rafiki’s Planet Watch, along with that of the rhinoceros and hoofed stock.

While meandering through elephant country, we see a flamingo pool with a raised area in the shape of Mickey Mouse. Greater flamingos reside on the reserve, while lesser flamingos are in front of the Tree of Life. With a bent bill, flamingos eat tiny organisms like fish and plankton. Using long legs and webbed feet, flamingos stir up mud and stick their bill into the water, sucking up water and mud, and pumping out the fluid through the sides. Flamingos stay in large groups called flocks or colonies for protection. They are chatty animals, and one can hear their honking, grunting, and growling near their habitat at Animal Kingdom Lodge’s Uzima Springs Pool.

After we leave elephant country, we enter the mud pits where white rhinoceros love to wallow and cool off. Weighing about three to five thousand pounds, these animals are listed as a near-threatened species and are heavily protected and managed. Similar to the elephant, they have a large amount of space to meander through the reserve and are generally highly visible to guests. From my experience, “giraffic jams” and rhinos blocking the road are the main reasons for vehicles being stopped on the path.

Rhinos are social and enjoy watching and learning from others’ behavior. Some animals are seen wearing activity trackers around an ankle. These are used to track distances rhinos run and walk, monitor sleep and nap schedules, and calculate where the animals spend their time. Other zoos and wildlife centers engage in similar research, and the results help animal care experts understand the relationship between a rhino’s health and different habitats. Baby rhinos visible to guests have been relatively common in the past few years. Rhino calves weigh up to 140 pounds at birth, and they nurse, stand, and walk within an hour of being born.

As we continue, a cheetah can be spotted on a shaded hill. Of the big cats, cheetahs are relatively small (75 to 125 pounds), allowing them to accelerate from zero to 60 mph in three seconds, running up to 70 mph over short distances. Cheetahs do not meow, but they purr and chirp. Black stripes running from their eyes to mouth block out the sun’s glare so cheetahs can focus on their prey.

Cast Members are very creative in thinking of ways to enrich an animal’s environment. One of them is using perfume or cologne sprayed on logs, which large cats like to roll on and scratch. They are curious about a new scent and playfully assert their territory after smelling something different. Tigers, lions, and cheetahs revel in this activity. Hard plastic balls used for play are enhanced even further by drilling holes and stuffing them with treats that are hard to get. Rich habitats with tall grasses, rocks, branches, stumps, and views keep cheetahs active and agile both mentally and physically.

There ate two tours that provide the opportunity to see elephant and rhinoceros habitats up close. Caring for Giants is $35 and allows guests to see elephants for a greater length of time than the attraction permits. Visitors also learn more about their care while on the tour. That experience generally receives positive reviews. Up Close with Rhinos is $45 and takes you up close to the animals. Both tours require a valid theme park ticket and reservation for Animal Kingdom. To my endless frustration, I have never been able to do either!

Disney+ abounds with options if you wish to learn more about the animals seen on this portion of the attraction. The Crimson Wing: Mystery of the Flamingos (2008) was the first feature released under the Disneynature label and is a fantastic and calming journey into the world of flamingos in East Africa. My favorite feature about elephants is Disneynature’s In the Footsteps of Elephants (2020) which goes behind the filming of 2020’s Elephant. Cheetahs, challenging to see while on Safari, are on full display in The Way of the Cheetah, Man Among Cheetahs, and Growing Up Wild. The Flood (2018), narrated by Angela Bassett, takes us to the Okavango Delta in Botswana, where we see wildlife and how they interact with each other and their environment. Elephants, cheetahs, lions, hippos, and much more are seen migrating, hunting, and surviving.

We will conclude our journey through the Harambe Wildlife Reserve by venturing into lion country and back to the ranger station.

Have you ever completed the tours offered at Animal Kingdom? Did you feel the experience was worth it? Do you have a favorite nature-related viewing option on Disney+? Please feel free to leave a comment!