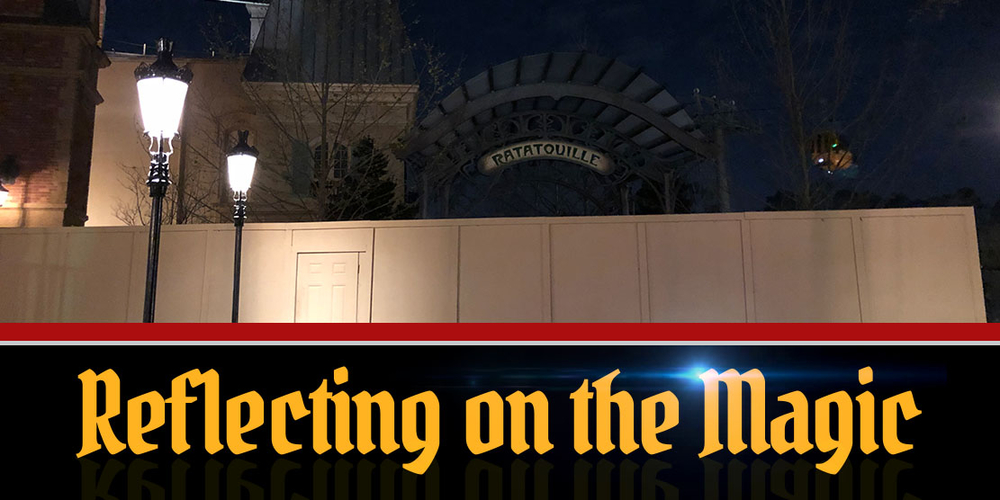 My last time in a Walt Disney World park with family and friends before the temporary closure was Monday, March 9th. It was a lovely evening, and my hubby and I spent hours enjoying Epcot with two dear friends and their amazing six year old, Asher. Asher and I had an adventure with Dory and her friends that evening, but that’s a story for another day.

Near the end of the evening, we found ourselves at the France pavilion, and I had my first chance to really stop and see the new Remy topiary. The Remy topiary is absolutely adorable, and highlights Little Chef as he holds a wooden spoon and stands on a wheel of cheese. He’s surrounded by pots filled with culinary herbs. I loved the addition of Remy, especially due to the fact that a new headliner attraction based on his adventures is slated to open this summer in the pavilion.

As I’ve mentioned before, getting to Paris is on my bucket list. In a utopian world, I’d be there for a month, shopping and cooking for the day, exploring all of the locations that I’ve studied over the years. And I’d visit Disneyland Paris. And, of course, I’d ride Ratatouille: L’Aventure Totalement Toquée de Rémy and dine at Bistrot Chez Rémy over and over again. While I’d love to ride Remy’s Disneyland Paris attraction, I guess I never really thought that I would get there (at least any time soon), so I watched ride-through footage of Remy’s attraction years ago. Fast-forward just a few years, and imagine my surprise and excitement when it was announced that Remy’s Ratatouille Adventure would be coming to Epcot. Be still my heart.

As we were standing there admiring the Remy topiary, my friend Kate and my hubby almost simultaneously mentioned that they had heard that a new sign had been installed that day at what will be the entrance to the new addition to the France pavilion.

Following all of the Disney happenings on social media is part of my job, but somehow in the flurry of daily things, the Ratatouille sign being installed had been missed. I gasped and scooted over to where the new area is, and there it was in all of its glory.

The sign itself takes its design from the verdigris cast iron and Art Nouveau styling and lettering found on the signs that stand at the entrances of the Métropolitain (the Paris Métro) stations. If you’ve had the chance to ride the Disney Skyliner either to or from the International Gateway station, you’ve likely slobbered all over the glass (maybe that was just me) as you’ve flown past the construction happening backstage at the France pavilion. The new sign stands at the entrance of the walkway that will lead guests to the new courtyard area that will house the Crêperie (both counter and table service), Remy’s attraction, merchandise locations, and most likely, additional restrooms.

The sign is located near the gazebo where Princess Aurora meets and greets, and beside the perfume shops.

Are you excited about the additions coming to the France pavilion? What future attraction that’s coming to WDW are you most excited about? What attraction do you hope to see added to Walt Disney World in the years to come? Please let me know in the comments section below. Au revoir!