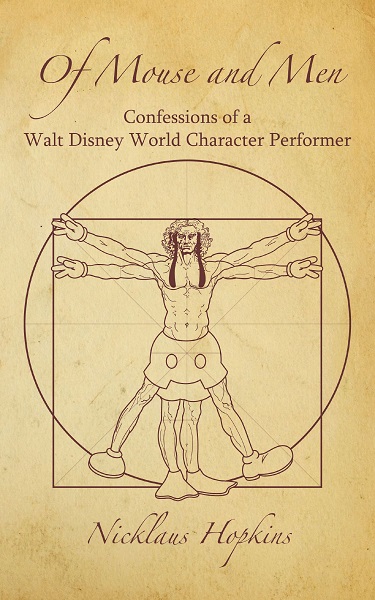 As guests arrive at Disneyland or Walt Disney World, they pass under an archway before heading onto Main Street U.S.A. Above the archway is a plaque that reads, “Here You Leave Today and Enter the World of Yesterday, Tomorrow and Fantasy.” And that is exactly why people love going to a Disney Park. It’s fun. It’s pleasant. They can leave all their everyday lives behind and just enjoy everything Disney has to offer. For some, the passion is so deep they would love to work at one of the Disney Parks. Nicklaus Hopkins was one of those people.

After reluctantly succumbing to a bear hug from Goofy, four and a half year old Hopkins was hooked on Disney. Years later, he and his wife moved to Florida and he started working at Walt Disney World. Hopkins worked for the company for three years before moving on. He currently is a professional writer and college professor.

Those that work and have worked at a Disney Park always say they love(ed) their time there. The guests they meet, the magical memories and experiences they create virtually cannot be replicated anywhere else. However, like any other workplace, Hopkins describes in “Of Mouse and Men,” the magical and not-so magical aspects of working for the Mouse.

After his first experience with Goofy, Hopkins was obsessed with him. He watched every Goofy cartoon and worked on perfecting every Goofy mannerism. “… the two of us shared a special bond,” said Hopkins. “He was my absolute favorite growing up.”

Hopkins’s book reads almost like a diary. It starts with character training and ends with his last day working for the Walt Disney Company. Along the way, he recalls the ups and downs of his training, first day in the park, and experiences as each of the Disney character that he played.

Hopkins said that when he received his offer letter as a Cast Member in the Entertainment Division, your position in that department was determined by your height.  “… the position was listed on the form simply as Goofy character,” writes Hopkins. “Naturally, I thought I would be exclusively ‘playing’ Goofy…”

During his training, Hopkins quickly discovered for some characters, such as Goofy, signing an autograph book isn’t as easy as he thought. He practiced and perfected Goofy’s signature for weeks prior to training. After donning the costume for the first time, his trainer asked him to sign a book. He held the book up to where he could see (out of the mouth) and signed Goofy’s name perfectly. However, Goofy could not have possibly have seen the book because his eyes were higher up.  It was then that Hopkins learned he would have to sign Goofy’s name perfectly without looking at what he was signing.

Other things that character performers learn during their training is how to act as their Disney counterpart, what Disney ‘basics’ are, how to pack your black duffle bag, drink plenty of Powerade, how and when to use the “SOS” signal, and what is and how to avoid “character glove.”

Each chapter in “Of Mouse and Men – Confessions of a Walt Disney Character Performer” is dedicated to a different character that Hopkins played and his interactions with guests, Cast Members, and Disney Management.

Hopkins most memorable guest interaction was when he was Goofy in Disney’s Animal Kingdom’s DinoLand section. Guests are almost always overjoyed to meet their favorite characters, but for two Japanese girls meeting Goofy (in this case Hopkins) exceeded their wildest expectations.

I had the chance to speak with Hopkins about this, “The whole thing had the vibe of an early Beatles show,” he said. “The continuous shouting of Goofy’s name, the jumping up and down, the hanging on for dear life to my gloves and shirt. If you could ever feel like a rock star, while wearing suspenders and clown shoes, that was the moment.”

Even though he writes about some incredibly outrageous, inappropriate guest behavior, Hopkins says that generally the “outrageous guest stories were fairly uncommon.”

Annie Salisbury, who has written three books for Theme Park Press, previously talked about her good and not-so-good experiences working with other Cast Members.  Hopkins does as well, but from the character perspective. Working at Disney is not really any different than working for any large or small company. There are those that are a pleasure to work with and for and then there are those who are not.

In the past, when guests yelled, “Andy’s coming!” the “Toy Story” characters would supposedly go lifeless and drop to the ground. When asked about this, Hopkins said “We would joke about it off-set… in training they were adamant about us never going down to the ground in costume when onstage. So, even if a guest ha d done it, we probably wouldn’t have played along. Plus, if Buzz had gone down, he’d have a heck of a time getting back up in that costume.”