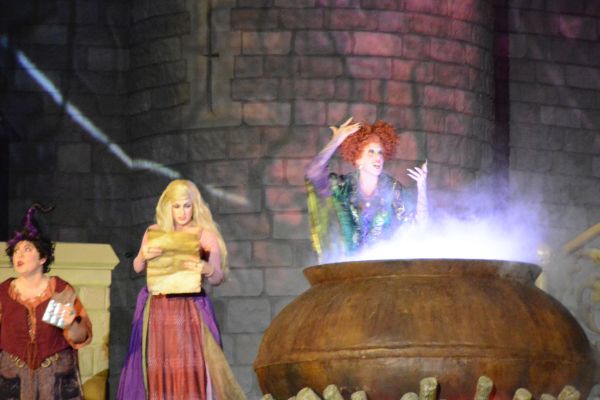 This was my first year attending Mickey’s Not So Scary Halloween Party. The event was super fun and the special entertainment like the Hocus Pocus Villian Spelltacular, HalloWishes Firework Display, and so much more made this event a truly magical time. That being said, the event wasn’t perfect. Being that it was the first night of the event, and sold out, the park seemed packed. Lines for candy looked to be 15 to 20 minutes long. The only decent place to get candy without a long line was the small pathway behind the Tomorrowland Speedway. With special character meet and greets many guests spent most of their night meeting with these limited time characters because these lines were just as long as the lines for the candy. Watching the Mickey’s “Boo-to-You” Halloween Parade and the Hocus Pocus Villian Spelltacular I had to be shoulder to shoulder with the guests surrounding me. Because this is a special ticketed event I thought for sure that the park would have been a lot less crowded. Considering it was a Tuesday night in September, making it a school night, I was surprised how many families were there. No one was enticed to get on any of the attractions

One thing that wasn’t as crowded was the lines for the attractions. Most lines were only 10 to 15 minutes, and no longer than 30 minutes. In some ways this was great, but the problem is that in normal park hours the rides absorb a larger number of the guests in the park, but that wasn’t the case for Mickey’s Not So Scary Halloween Party. Most guests were taking advantage of the special entertainment, free candy, and meet and greets, which left the park feeling cramped.

I suggest that Disney puts some of the Trick-or-Treat Candy locations at the ride exits. This way it will entice guests to get on the attractions in order to get their candy. By pulling more guests into the attractions it will free up the rest of the park. For the first night of a special event, you’d think Walt Disney World would supply enough merchandise. Well you’d be wrong in that assumption. Shirts like the limited edition Sanderson Sisters shirt were all quickly sold out. Considering most guests won’t be returning for another Mickey’s Not So Scary Halloween Party until next year or later it is unfortunate that they might have had to pick something that they considered second rate compared to the thing they really wanted. If this had been the last Mickey’s Not So Scary Halloween Party I would have understood that Disney didn’t want to overbuy something they wouldn’t sell after the Halloween season is over, but this was the first night of the event!