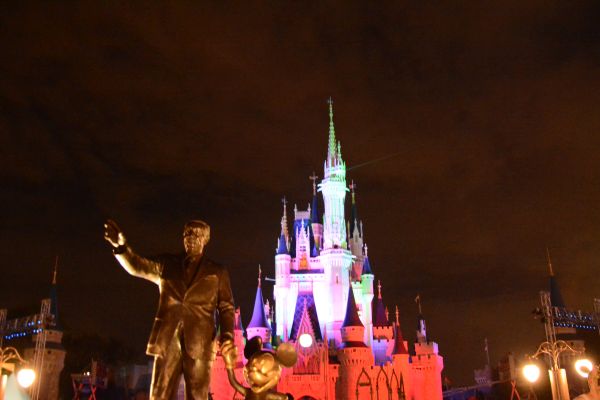 The Sanderson Sisters make their Magic Kingdom premiere with a mesmerizing performance in the Hocus Pocus Villian Spelltacular. The anticipation was palpable as guests waited for the show to start. Guests packed in shoulder to shoulder for the first show, and many guests were trying to inch closer and closer to the stage in front of the castle. I was largely impressed by the show. I liked the integration of classic Disney villains’ music with the Sanderson Sisters. I think it is important to note that the performers who played the Sanderson Sisters did a great job especially considering this was their first performance. Overall I thought the music, castle projections, and acting from the character performers came together seamlessly. The biggest downside to the show was not the fault of the character performers, but rather the fact that it was just very crowded. For the opening show the guests were packed so tightly I felt squished and uncomfortable. Before the parade officially starts, make sure you see the Headless Horsemen trot through the Magic Kingdom, as he is a sight to see! Mickey’s “Boo-to-You” Halloween Parade features the classic Disney characters along with many ghoulish dancers. Many of the classic Disney characters were wearing special Halloween costumes, which added a unique flair to the already loved characters. The hitchhiking ghosts even make an appearance as they dance atop their own float! Parts of the parade seemed to not fit in; for example, the Halloween Harvest float featuring Clarabelle Cow seemed to take away from the spooky vibe of the rest of the parade.

Of all the special entertainment at Mickey’s Not So Scary Halloween Party this parade was one of the things that I was least impressed by. Don’t get me wrong, it was still a great parade, but it just didn’t blow me away. It is hard to compare parades, but because Festival of Fantasy is so spectacular I find it hard to be impressed by anything that isn’t up to that standard. Specialty fireworks are always a treat in Walt Disney World, but these fireworks blew me away! The familiar voice of the ghost host opens the show and the fireworks start quickly after that. These fireworks featured effects that I had never seen at the Magic Kingdom including spiraling fireworks on the front of the castle. Accompanying the fireworks was a combination of Disney villains singing, and pop covers of the classic Disney villain songs. Little touches like the castle turning green when Oogie Boogie is singing, or purple when Ursula is singing proved that this show was up to the standard I expect from Disney, but this show had an X-factor that really impressed me!

That X-factor was the finale. The finale blew me away! The 180-degree fireworks, along with a vast amount of fireworks going off behind the castle, made it seem as if the entire Magic Kingdom Park had lit up as if it was daytime! Throughout the night there were 14 Trick-or-Treat locations! This free candy did give the Magic Kingdom the true Halloween feel. Even in mid-September it truly felt like Halloween night due in part from the free candy. Each location offered large handfuls of candy like Milky Way, Snickers, Air Heads, and so much more! I saw many kids with huge bags and pillowcases filled with candy! The only downside was the lines. Many of the lines stretched on for what looked like 15 to 20 minutes. One of the candy locations was the Tiki Room and due to the free candy it was the most crowded I’ve ever seen the Tiki Room line. This year Mickey’s Not So Scary Halloween Party only featured one dance party, which was located at the Tomorrowland Stage. Missing the Diamond Horseshoe from years past left the Tomorrowland Dance Party to be the only option for guests wanting to get their Halloween grove on. The monsters of Monsters Inc. like Mike, Sully, and Needleman hosted the fairly popular dance party.

Overall the dance party itself was enjoyable and fun for the guests, but I still think taking away the Diamond Horseshoe as being another Character Dance Location was a mistake. Overall Grade of Mickey’s Not So Scary Halloween Party: A-

Despite some of my complaints I did have an amazing time. The atmosphere was electric and the Magic Kingdom just felt even more special! Personally I was experiencing a lot of what is special and only available during Mickey’s Not So Scary Halloween Party, but for those guests who just like the rides, many of the waits were only 5 to 10 minutes, including major attractions like Space Mountain.

There are plenty of days left to enjoy the party. Every corner of the park seems to offer something extra special! I highly suggest taking advantage of Mickey’s Not So Scary Halloween Party!